Novice traders and momentum chasers have been piling into low-dollar stocks, Jim Cramer told viewers of his "Mad Money" program Wednesday. But Cramer said it's time to set the record straight on many of these hot names. So, he took at look at the 10 most-traded stocks. We will mention the top two and focus on No. 3.

Topping the list was Penn National Gaming (PENN) , which recently was featured on "Mad Money" and was reviewed technically by me on Tuesday. Cramer said he likes Penn National long term, but with Covid-19 spiking sports seem less likely.

Moderna Inc. (MRNA) came in at No. 2, but of all the vaccine makers, this one has the most to lose, Cramer said.

Tesla Inc. (TSLA) was next on the list and was the only stock of the group Cramer continued to recommend. We looked at Tesla on June 8. At that time, we wrote, "Traders who are long TSLA could raise their stop protection to just below $840; $936, the round number of $1,000 and then $1,147 are our price targets now." Prices reached our first two price targets before pulling back on Wednesday. Let's check out the charts and indicators of this electric car maker plus.

In this daily bar chart of TSLA, below, we can see that prices have made a reversal pattern -- a close below the low of the high day -- and could see additional price weakness. While still above the rising 50-day moving average line and the rising 200-day moving average line, prices look about as extended as they did in February when compared to the 200-day average. The length of the November-to-February rally looks about the same as the March-to-June rally, which is another reason why we may be seeing a pullback.

In this weekly Japanese candlestick chart of TSLA, below, we can see the impressive base pattern around $300 and the subsequent huge mark-up. Prices are above the rising 40-week moving average line, but notice the upper shadows above the round number of $1,000 in recent weeks. Traders are rejecting those highs. The weekly OBV line has yet to decisively break out to a new high and the 12-week price momentum study shows a slight weakening from February to June despite prices making new highs.

In this daily Point and Figure chart of TSLA, below, we can see the recent pullback in price marked by the column of "O's". The chart still shows the upside price target. A decline to $904.92 or lower is probably needed to weaken this picture. 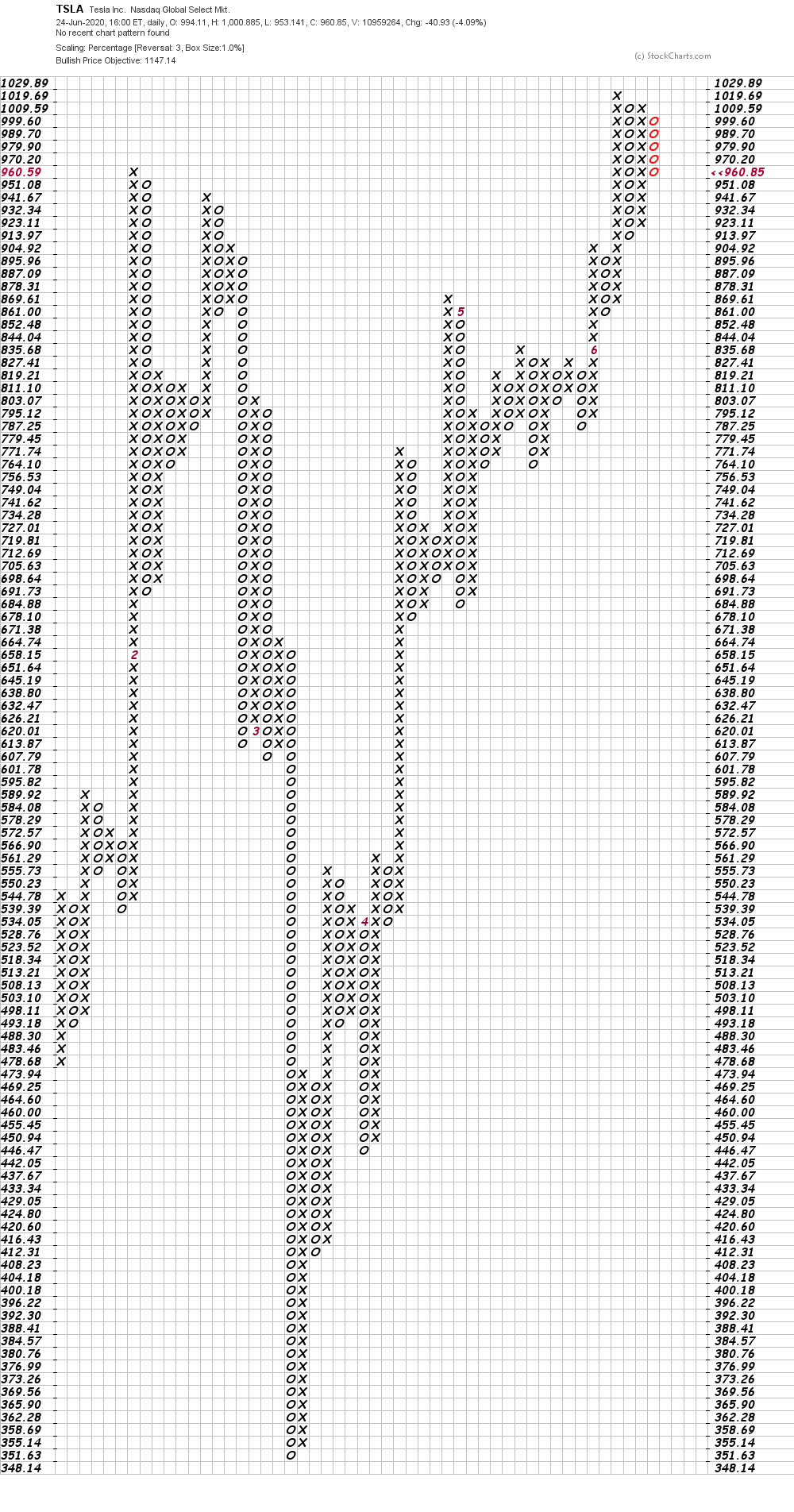 Bottom line strategy: TSLA has not made a large distribution top formation but it has made a minor reversal pattern. I would expect some more price weakness into next week but not a major shake-out.

Get an email alert each time I write an article for Real Money. Click the "+Follow" next to my byline to this article.
TAGS: Investing | Stocks | Technical Analysis | Automotive | Technology | Mad Money | Real Money | Elon Musk