On Oct. 24, Tesla (TSLA) famously reported a $312 million surprise profit for the third quarter. In the 10-Q filing a little over a week later (Nov. 1), much of that was called into question, based on a combination of revealing more subsidies than what was disclosed on Oct. 24 and suggesting other unexplained items such as the mystery 10% (or more) accounts receivable "entity."

But let's focus on just the subsidies now. Let's put them into context of Tesla's $312 million reported profit.

These subsidies to Tesla fall into three main categories:

That's the easy part. The numbers are right there, in the 10-Q -- even if Tesla conveniently didn't disclose the non-ZEV part in the Oct. 24 press release. Only one week later in the 10-Q.

But what about the FIT credit? This is the (up to) $7,500 per car that a buyer can deduct from his or her annual U.S. federal tax liability, assuming the person has any such liabilities. If the car is leased, the leasing company collects the $7,500 and lowers the payment to the lessee with a corresponding amount over the lease term.

Obviously, Tesla itself doesn't see this $7,500 per car directly. The money is paid to the buyer of the car -- not the seller, Tesla. But that's just semantics as far as Tesla's actual economics are concerned. The car becomes $7,500 less expensive to buy, benefiting Tesla just as much as if Tesla itself had received the $7,500 benefit from the U.S. government.

It makes no difference to Tesla whether it collects the money, or whether the buyer collects it. The net result is the same: The car costs $7,500 less than it otherwise would. It's a subsidy, and Tesla is the de-facto beneficiary.

Let's get a sense of how much such FIT credit money we are talking about, in the aggregate. This is a breakdown of Tesla's third-quarter 2018 vehicle unit sales -- total, U.S. and international:

What about the 13,850 cars Tesla sold outside the U.S. in the third quarter? That's where it gets very difficult, for obvious reasons. Tesla sells cars in numerous countries around the world, and they all have very different EV subsidy schemes. Some have none. Some have greater subsidies than the U.S., and some have less.

For the purposes of this calculation, and to stay as conservative as possible, let's just say that Tesla's international sales had zero subsidies. That's clearly not true -- Norway has far greater subsidies than the U.S., for example -- but just so that nobody accuses of me aggressive accounting on this exercise, let's go with "zero."

With that, here's what we have got for Tesla's U.S. subsidies in third-quarter 2018: 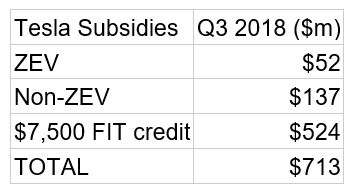 As you can see in the table above, Tesla benefited from $713 million in U.S. subsidies in the third quarter, not counting anything from its considerable international sales. Of those subsidies, $189 million arrived visibly on Tesla's own books, whereas $524 million ($7,500 x 69,925 cars) benefited Tesla indirectly.

This all compares to Tesla reporting a $312 million profit for the third quarter. Subtract the $713 million in U.S. subsidies, and Tesla's results would be far weaker. Add in the international subsidies received from countries such as Norway, Sweden, The Netherlands and the U.K., and the situation would look even worse.

How much is this on a per-car basis? Divide $713 million by the 69,925 cars Tesla sold in the U.S. in the third quarter, and you get $10,197 per car. Congratulations, Mr. and Mrs. Heartland America, you have just subsidized a bunch of millionaires living in California's most expensive coastal ZIP codes to the tune of $10,197 per car. I'm sure they are sending you a thank-you card.

Actually, no, they're not sending you a thank-you card. They're probably voting Tuesday to destroy your pocketbook and lifestyle even more.

Conclusion: In my view, without subsidies, there would be no Tesla.

As far as I'm concerned, Tesla's main product isn't the car, it's the subsidies. Without $713 million in quarterly subsidies from the United States alone, I don't think Tesla would be in business.

When you go out and buy a regular vehicle such as a Ford F-150, Chevrolet Silverado or RAM 1500, know this: Your taxes, and elevated price on this vehicle, go to keep Tesla from losing many hundreds of millions of dollars each quarter.