My guess would be that most people reading this article already are well-aware that on Monday morning, ahead of the opening, Tesla Inc. (TSLA) will be added to the S&P 500 (and S&P 100). That makes this Friday night's closing price the big one. Oh, by the way, this Friday is also a quadruple witching expiration event..

By virtue of the very concept of passive investment, investors who track the index -- or, more specifically, funds that track the index -- will be forced to reallocate capital already invested elsewhere to purchase shares of Tesla. It's not as easy as you think, just in case you thought it sounded simple. Yes, Apartment Investment & Management (AIV) will be leaving the index, but the two companies do not size up for an even trade. This disproportionate trade is along the lines of Nolan Ryan for Jim Fregosi, to put the comparison in baseball terms. FYI, Occidental Petroleum (OXY) will be leaving the S&P 100.

This is the deal. Tesla, at its Wednesday close of $622.77, runs with a market cap of $590 billion. That makes Tesla more valuable than Berkshire Hathaway (BRK.A) (BRK.B) , worth a cool $524 billion. Usually when a company is elevated to membership in the S&P 500 it comes in toward the back end of that group. It is most unusual that a company comes in as the sixth most valuable corporation among the 500. That means Tesla will require a hefty allocation. AIV's market cap is $766 million. Obviously, these funds are going to need to sell at least a portion of a vast number of their holdings in order to properly allocate their funds in a way to mimic index performance.

Expect Tesla at these prices to require a weighting of more than 1.5%, maybe as much as 2% depending on what the stock does over the next couple days. Now, all the action may (will) not happen all at once, though much of it will. Most funds do have some leeway in trying to get allocation correct over a number of days. I am sure that the action is already under way and will continue into next week. The problem is not only the very idea of mass forced buying of an extremely volatile stock at the very top of its chart after running 644% year to date, but that afterward the index itself will become more top heavy than it already is.

The top five largest companies in the index already weigh 23% upon the index. The top 10? 28%. Now you bring in a new No.6 and kick out a name close to the back of the pack. It would appear to me that the S&P 500 can only become more volatile next week, and Tesla itself will likely have hit a short- to medium-term peak once the dust settles.

These are not necessarily good things. Tesla will still have the cult, but once the funds buy at the top, by mandate, they will be forced to sell significant amounts of shares upon periodic rebalancing events. Think TSLA won't be trading considerably lower (or even higher) as these events come and go? Unless inclusion tames Tesla's volatility, then Tesla's impact on everything else will expose passive investment to the danger of the broad market's (and even economy's) performance that those of us who manage our own portfolios for a living have warned of for years. 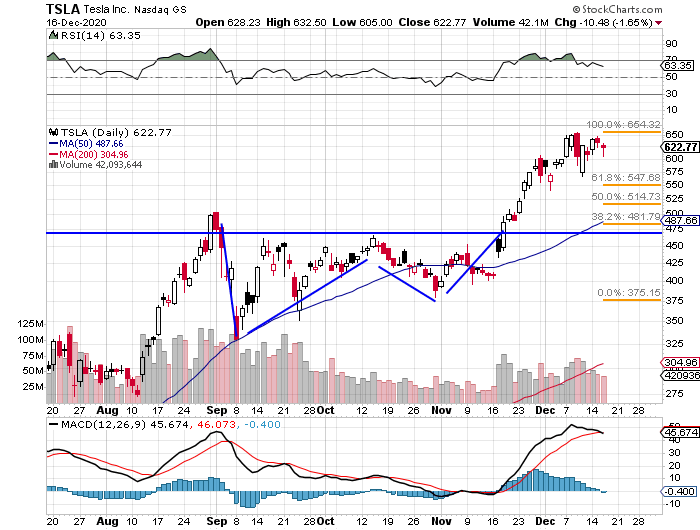 Regular readers already know I sold off my entire long position in Tesla. I wrote in a stand-alone piece on Dec. 8 that I had dumped my entire stake in that day's pre-opening session. My average price that day ran with a $636 handle. The idea was to buy at least some of the shares back for a trade. I laid out my plan in the piece. I bought back a portion of the position just above $579. I was going to add at $565. The shares never got there, and I did not chase. So, I go into the end of the week long what is likely to be a good trade, but nothing like the investment I had in the shares more than a week ago.

Let me make this clear. I am 98% sure that I will sell my Tesla either at Friday's close or very close to it. Might the shares go higher next week? They might. Is there significantly increased risk for smallish investors with an interest in this name moving into the first quarter? Definitely. That's my opinion. I will be flat this name in less than 30 hours.

Get an email alert each time I write an article for Real Money. Click the "+Follow" next to my byline to this article.
TAGS: Index Funds | Investing | Stocks | Automotive | Real Money