In his recent Real Money column "I'm Dumbfounded Tesla's Stock Is Not Up Even More Than It Is" Jim Cramer opined on the news that Tesla's (TSLA) market cap now exceeds that of Ford (F) and General Motors (GM) combined. He said comparing market caps is a waste of time, because what the market really values is growth, and Tesla has plenty of it. While Ford is stagnant and GM is shrinking, Tesla continues to grow like a weed, even in China -- where the company didn't have a factory last year, but it does now just one short year later.

Every time market caps jockey for position, the bears come out to declare the new pecking order is all wrong. But Cramer said you can't even compare a growth stock to a value stock, as they appeal to different classes of investors. He said until Tesla's valuation is twice that of Ford and GM, he's not worried.

I am all charged today up so let's check in with the charts and indicators this morning to see where TSLA shares could travel to.

In the daily bar chart of TSLA, below, we can see that prices have made a huge upside run since early June. Prices gapped to the upside in early October on very heavy trading volume and the advance accelerated. Prices surged above the rising 50-day simple moving average line and above the bottoming 200-day moving average line.

In early November the 50-day line crossed above the slower-to-react 200-day line for what is commonly called a (bullish) golden cross. This mechanical buy signal can be effective in long-trending markets. The daily trading volume looks like it expanded in November and December giving classic chart watchers a positive signal.

The daily On-Balance-Volume (OBV) line has been climbing steadily since early October telling us that buyers of TSLA have been more aggressive. The trend-following Moving Average Convergence Divergence (MACD) oscillator generated a buy signal in September when it moved above the zero line. This indicator is still very bullish.

The first weekly bar chart of TSLA, below, is very bullish. Prices are in a strong uptrend but what is really bullish is the breakout over the highs of 2017 and 2018 in this chart -- this is new high ground and there is no overhead resistance. Prices are above the rising 40-week moving average line.

The weekly OBV line has been strong from late May and is in new high ground to confirm the price gains. The weekly MACD oscillator is pointed up and has been super strong since October when it crossed above the zero line for an outright buy signal on this longer time frame.

In the second weekly bar chart of TSLA, below, we can see all the price history available on www.bigcharts.com. Here we can see three large consolidation patterns. The first pattern looks a line pattern from 2010 to 2013. A rally followed the upside breakout in 2013. Prices consolidated from 2014 to the end of 2016 before another big rally in 2017. TSLA traded in a wide sideways to lower pattern until around the middle of 2019.

The indicators in the panels below the chart are bullish with a rising OBV line and a soaring MACD oscillator.

In this Point and Figure chart of TSLA, below, we "tweaked" the data using weekly dynamic average true range of price movement to create the chart and generate a big upside price target of $953. Could TSLA double from here? That would be amazing. 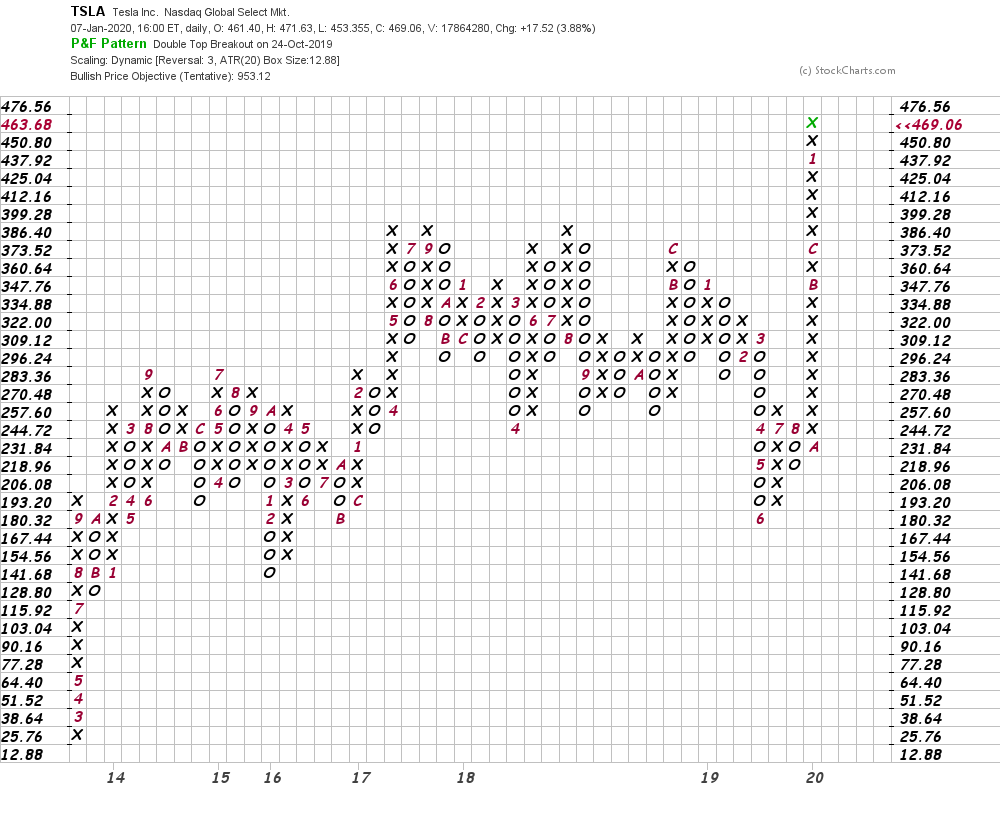 Bottom-line strategy: Yes, TSLA has made a big upside move in the back half of 2019, but it is not extended when compared to the 50-day moving average line. TSLA could make a sideways consolidation pattern at any time but traders and investors should consider it a potential buying opportunity or at least an opportunity to raise stop protection to below the lows of the pattern. Can TSLA double from here? How much faith in Point and Figure targets do you have?

Get an email alert each time I write an article for Real Money. Click the "+Follow" next to my byline to this article.
TAGS: Economy | Investing | Stocks | Technical Analysis | Automotive | Technology | Mad Money