Tesla Inc. (TSLA) is the Stock of the Day at Real Money. The electric carmaker had its annual shareholder meeting on Tuesday, and CEO Elon Musk declared that it "won't be long before we have a 400-mile range car" Musk also outlined plans to unveil a pickup truck this summer and to get into semi production toward the end of 2020.

Musk said that sometime next year drivers will be able to use self-driving features in their vehicles without intervention. Tesla is on target to grow its entire "fleet" by 60% to 80% in 2019, Musk added, saying "it's hard to be profitable with that level of growth," but the company would still be cash-flow positive while growing at that rate.

TSLA has been up and down by fractions in early trading Wednesday. Keeping that in mind, let's look at the charts with activity through Tuesday's close.

In this daily bar chart of TSLA, below, we can see two downtrends separated by about an eight-week bounce. TSLA is below the declining 50-day moving average line and the bearish 200-day line. The daily On-Balance-Volume (OBV) line has been in a decline from last June. In the lower panel of this chart is the 12-day price momentum study. From April to May momentum makes a lower low like prices -- thus no bullish divergence to suggest that buyers used the weakness to accumulate shares.

In this weekly bar chart of TSLA, below, we can see a large top or distribution pattern with a subsequent decline. Prices are trading below the declining 40-week moving average line. The weekly OBV line has been in a decline the past five months, telling us that sellers have been more aggressive. The weekly Moving Average Convergence Divergence (MACD) oscillator is below the zero line in bearish territory but it shows the start of some narrowing. If the two moving averages of this indicator cross to the upside it will be a cover-shorts buy signal.

In this Point and Figure chart of TSLA, below, we can see an ambitious upside price target in the $300 area. However, there is a lot of chart resistance above the market. 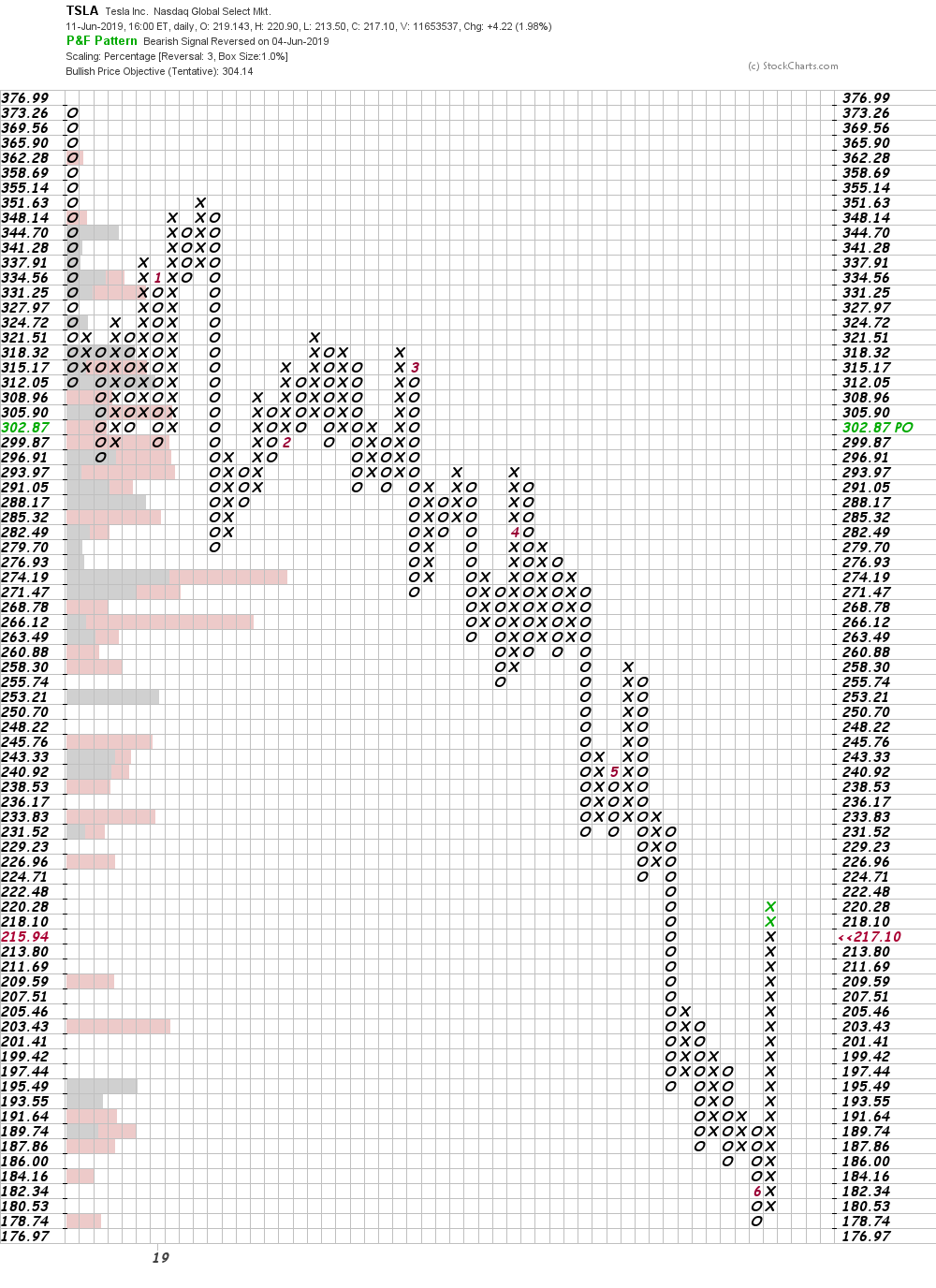 Bottom line strategy: TSLA looks like it made a minor low and is bouncing. A low is not a bottom and I certainly do not see a base. With plenty of overhead chart resistance I see no reason to chase TSLA as it reacts to the latest headline.

Get an email alert each time I write an article for Real Money. Click the "+Follow" next to my byline to this article.
TAGS: Investing | Stocks | Technical Analysis | Automotive | Technology | Real Money | Stock of the Day | Elon Musk