In a special "Your Money, Your Vote" segment of Mad Money election night, Jim Cramer took calls from viewers. One caller asked about Teladoc Health Inc. (TDOC) . Cramer said Teladoc's merger with Livongo Health (LVGO) is a game changer and he still recommends it.

We last inspected the charts of TDOC back on July 30 saying, "I may be leaving money on the table, but I recommend that traders who are long TDOC from prior recommendations take profits at current levels and raise sell stop protection on the balance of any remaining longs to $202."

Let's check out the latest charts and indicators of TDOC.

Trading volume declined from August into the middle of October but has begun to increase again. The On-Balance-Volume (OBV) line has been weakening since early October telling us that sellers of TDOC have been more aggressive. The trend-following Moving Average Convergence Divergence (MACD) oscillator weakened in October and is now below the zero line for a sell signal.

In the weekly bar chart of TDOC, below, we can see that prices managed a four-fold increase from their large base around $60. Prices are above the rising 40-week moving average line and if the shares rally from current levels it will look like a successful test of this longer-term indicator.
The OBV line shows weakness from May but stability in late August and October. The MACD oscillator is still in a take profits sell mode but also still above the zero line.

In this daily Point and Figure chart of TDOC, below, we can see that prices met their downside price target of $189. 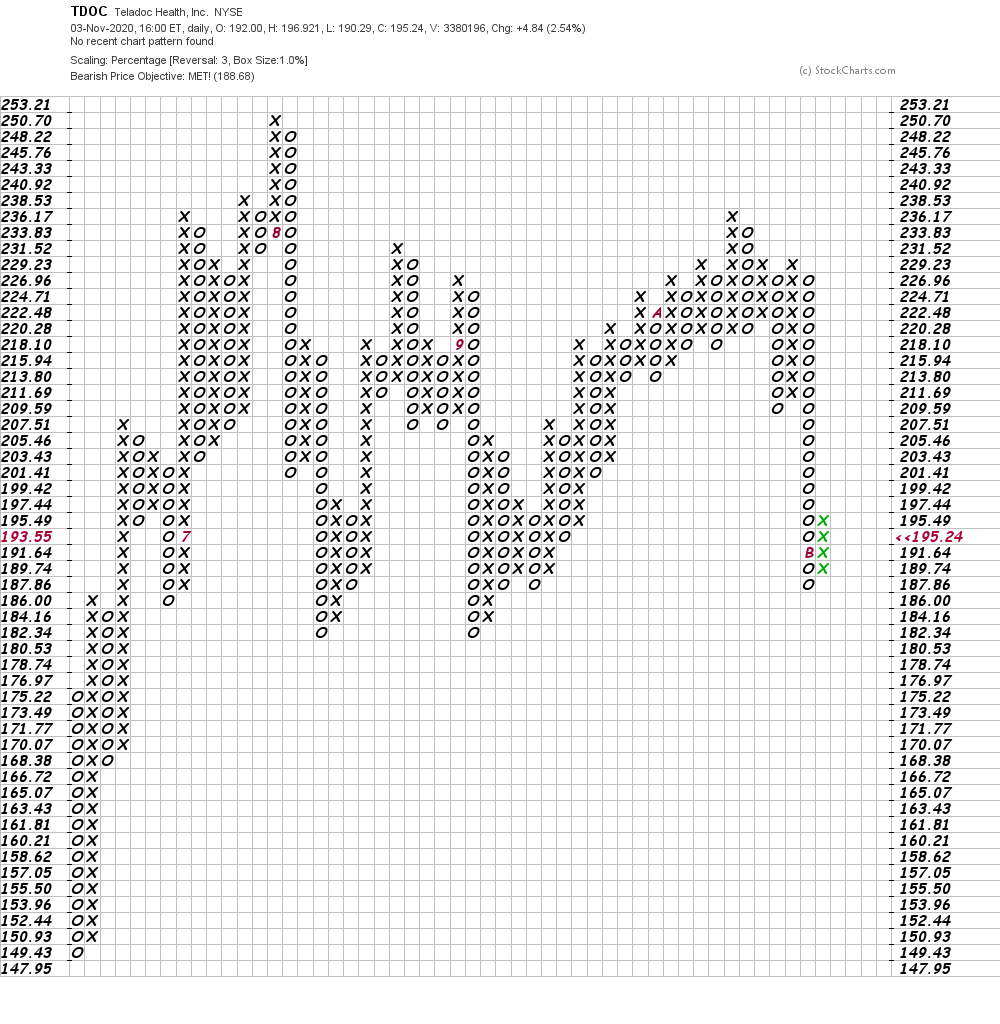 In this weekly Point and Figure chart of TDOC, below, we can see a potential longer-term price target in the $345 area.

Bottom-line strategy: Traders could re-enter the long side of TDOC at current levels risking a close below $180.
Get an email alert each time I write an article for Real Money. Click the "+Follow" next to my byline to this article.
TAGS: Investing | Stocks | Technical Analysis | Health Care Equipment & Services | Healthcare | Mad Money | Telecom Services