By TIMOTHY COLLINS Jul 03, 2020 | 12:00 PM EDT
Stocks quotes in this article: FSLY
Markets move in ebbs and flows. Sometimes the dog wags the tail. Sometimes the tail wags the dog. Trade long enough, and you'll see a tick wag both the dog and the tail.
A single name can grab the attention of virtually every trader, a stock that seems to tick higher every day. one where momentum takes control and carries it further and faster than most traders anticipate. Often, this type of awe-inspiring move begins with a fundamental catalyst, but chart (a.k.a. a form of technical analysis) can provide some of the best hints of just how explosive the moves can be.
Although we try to keep things simple when examining chart, sometimes those simplicities work to get us through the front door, but there's more to see. Once inside, we may want to check out the digs. Have a closer look around the place and gaze upon the nuances. A house may have many rooms, but with charts, we have four things we want to see, four boxes to check, if you will: Price, Trend, Momentum, and Volume.
When all four are in tune, it often signals the finds in the market, measuring in terms of risk vs. reward. It also will help us identify some of the most explosive stocks early in their run. If it helps to think of four legs to a table, then go with that. The good news is you don't have to overcomplicate things from the start. Surprisingly, you don't need to have four indicators on your screen, but you should know them. This is a tool we go to after a stock begins to breakout to get a better understanding on just how high it may go.
Here are the four legs to know:
Examples always help whether from last week, last month, or last year.
Take a look at Fastly ( FSLY) . On the weekly chart, the stock started first with a momentum trigger on the buy side. A few weeks later, the trend triggered a buy via the MACD. Then, volume triggered a buy. All of these happened while price hit resistance, eventually forming an inverse head and shoulders. Once price broke above resistance, it was off to the race in a jaw-dropping move. 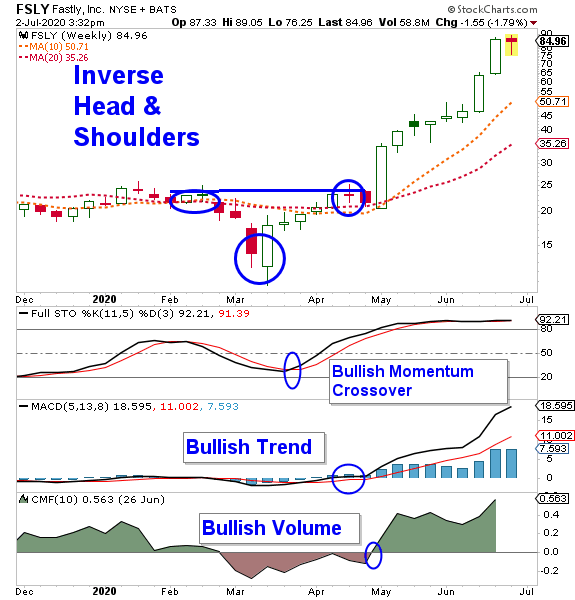 Even if you just used one indicator in conjunction with price, you would have been clued into the breakout. If you saw your chosen indicator trigger bullish, but without the confirmation of price, it would be easy to add another box to the mix and see if it confirmed your bullish view. You don't need it there every time, but you need to know what to add. The key is to identify an indicator that resonates with you. Be careful not to confuse indicators with different names that fall inside the same box. A trend is a trend. Momentum is momentum. Volume is volume. Having three different trend indicators is overkill. Having two different momentum indicators is unnecessary. You don't need confirmation of the same box. You want confirmation from different boxes.
If you are feeling overwhelmed at the idea of four indicators signaling four different things, start with two. Price is already ingrained in our minds. We watch price action every day, sometimes every minute. That one is a gimme.
So, if we only wanted to start with two, I would use price and probably MACD due to its versatility of offering a look at both momentum and trend. After you find comfort with that, then you can expect in your day-to-day analysis, but I've found three is plenty. I only go to a fourth when the setup looks explosive, like an inverse head-and-shoulders pattern or a long period of consolidation especially when there is a fundamental develop to ignite the move higher or lower.
Over time, you'll find what works best for you. Don't try to force anything into a box. Markets will change, so be willing to consider changes in your settings within the indicators (an entirely different article), but don't change, because you see someone else bragging about their success. In the end, it all comes back to the four basic boxes, no matter how you get there.
Get an email alert each time I write an article for Real Money. Click the "+Follow" next to my byline to this article.
TAGS: Investing | Investing basics | Stocks | Technical Analysis