Note: Meisler will be off until June 20 when her next letter will appear. Her next column will be Monday, June 21.

Can you hear the growth stock/tech love? It's been creeping into the market, but Thursday there seemed to be only a handful of skeptics left.

Near the May lows, the cries were growth stocks were awful, there was no reason to own them, because inflation was here and interest rates were going to sky rocket. Here we are a few weeks later, and growth stocks have caught some love -- heck, bonds have caught some love, more on that below -- and no longer do we hear the folks on TV recommend commodities, industrials and financials, which was the favored groups until a week ago. Now it's all about growth stocks,

There is probably still some love left to show up, but the shift is on. You see folks sold industrials, financials, transports and even retailers on Thursday to buy their beloved tech stocks. I have been using the National Association of Active Investment Managers exposure index as a gauge for exposure to tech stocks. In May they were at 44, the lowest since the spring of 2020. As of Wednesday -- the survey is taken on Wednesday so if it had been taken on Thursday I suspect it would have been higher -- their exposure was at 79.

I view that as no longer under-invested, but not yet over invested. My guess is if tech can hold on for a few more days, like through next Wednesday, without crapping out, this will be well into the 90s. The boat is too full in the 90s, and certainly over 100 it is often ready to capsize. 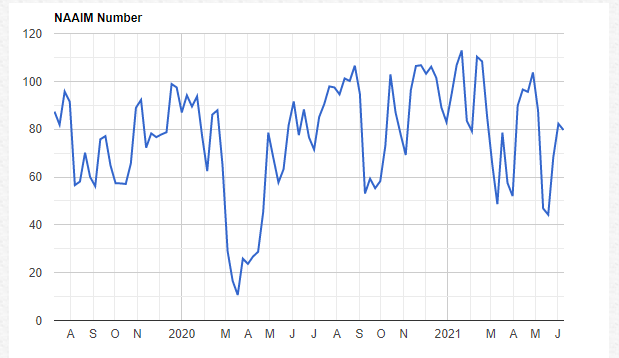 In the meantime, love for growth stocks is almost always at the expense of everything else and that means the either/or market is still with us. Breadth on Thursday was pathetic with the S&P up 20 and net breadth at positive 200. Worse was that only 45% of the volume on the New York Stock Exchange was on the upside.

Nasdaq didn't fare much better since despite the 100-plus point rally for Nasdaq it too saw up volume under 50% (at 47%).

However, breadth would have to weaken more to bother the indicators. The McClellan Summation Indexes are still rising for now. But the number of stocks making new highs has really tailed off as the NYSE went from over 400 a week ago to 330 Thursday. Nasdaq went from 270 a few days ago to 184 on Thursday.

But this is what happens when these mega-cap stocks rally, everything else seems to become a source of funds.

As for the bonds. No one thought bonds could rally (rates could fall) back in late February/March and now everywhere I look I see folks warming back up to bonds, or at least taming their bearish bond views. The Daily Sentiment Index (DSI) for bonds was single digits at the February and March lows. Now the DSI is at 79, so you can imagine if bonds rally (rates fall) much more that DSI is going to tell us folks have slipped too far to the other side of the boat and then it will be time to go the other way.

I still think the market in general is in a giant sideways zone and group rotation is what is driving it.

Get an email alert each time I write an article for Real Money. Click the "+Follow" next to my byline to this article.
TAGS: Investing | Stocks | Technical Analysis | VIX | Technology |