Smith said police accountability is something everyone can agree on. Video, he said, plays a big part in making that happen, as does providing police with tasers.

When asked why every police department isn't already using body cameras for their officers, Smith explained that it takes time for change to occur.

Collecting video evidence is only the first step in the accountability process, however. Smith said they are now one of the largest clients on Microsoft's (MSFT) Azure cloud.

Smith was also bullish on Axon's overseas prospects. He said there are 10 times as many police outside the U.S. and international will be a big driver of growth over the next five years.

Let's check out the drivers for the stock.

In the daily bar chart of AAXN, below, we can see that the shares made a relatively small decline back in February/March when the pandemic hit the markets. Prices rebounded in late March and made an early April pullback/retest before resuming the uptrend. The rally ran up into June before a correction unfolded. Another rally began in late September that was interrupted with a November/December consolidation. AAXN is now trading above the rising 50-day moving average line and getting extended (overbought) above the rising 200-day moving average line.

The On-Balance-Volume (OBV) line shows a rise for the past 12 months to confirm the price gains as buyers of AAXN have been more aggressive. The Moving Average Convergence Divergence (MACD) oscillator is bullish now and has been for much of the past year.

In the weekly bar chart of AAXN, below, we can see that the rally in the shares this past year has come from a breakout of a base around $50 going back to 2018. Prices are in an uptrend above the rising 40-week moving average line.

The weekly OBV line is rising and confirms the gains and the MACD oscillator is bullish and pointed higher.

In this daily Point and Figure chart of AAXN, below, we can see that prices have passed their projected target of $145. A correction may be needed at this point. 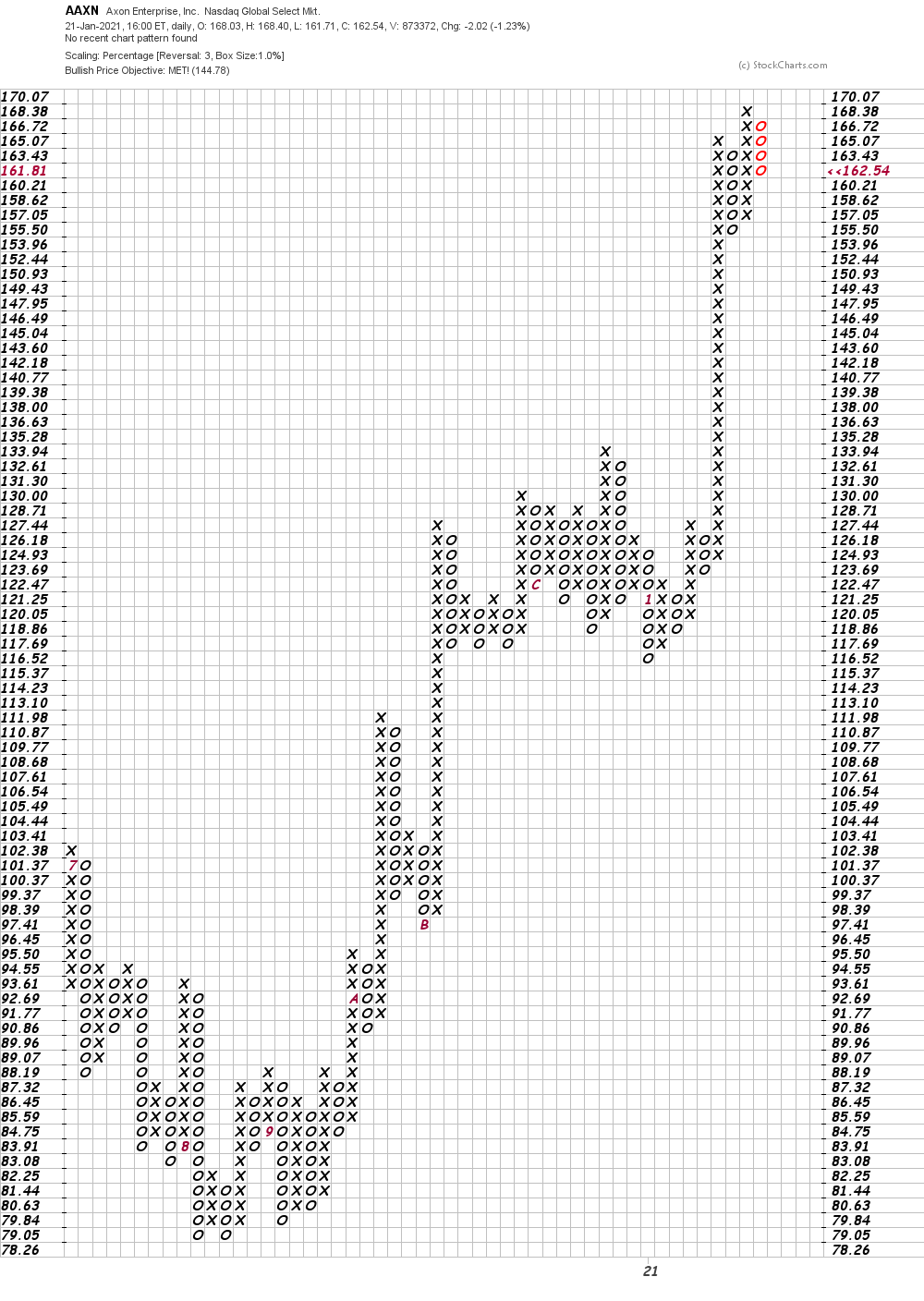 In this weekly Point and Figure chart of AAXN, below, we can see a potential longer-term price target in the $272 area. An ambitious objective, in my opinion.

Bottom-line strategy: AAXN has rallied about $50 this month and thus a correction or pullback would probably be expected. AAXN has made other corrections over the past year. Aggressive traders looking to go long AAXN should wait for a dip and stability around $150. Longer-term targets are the round number of $200 followed by $250 in late 2021.