Target Corp. (TGT) has been flirting with its September highs this month. Can or will TGT break out to new highs or will this retailer need to cut prices and build a stronger base pattern? Let's check out the charts and indicators and see if there is a good strategy to suggest.

In this daily bar chart of TGT, below, we can see three significant price gaps. In November there is a big gap to the downside in the middle of the November/December decline. In late April TGT gapped lower and crossed back below the 50-day and 200-day moving average lines. About one month later we can see TGT gapping higher on heavy volume. Today we can see that prices are above the April high but still below the September peak. The slope of the 50-day moving average line is bullish, but the slower-to-react 200-day average line is still flat or neutral.

The trading volume does not show a bullish nor bearish pattern in my opinion, and the daily On-Balance-Volume (OBV) line did move above the April high but has not broken above the September peak for this indicator. The trend-following Moving Average Convergence Divergence (MACD) oscillator has recently crossed to the downside for a take-profits sell signal.

In this weekly bar chart of TGT, below, we can see that prices may have outlined a double top but that it is too early to tell. Prices are above the 40-week moving average line, but its slope is negative. The weekly OBV line shows a rising pattern from early 2017 but it has made a lower high versus March/April of this year. The weekly MACD oscillator is above the zero line but starting to narrow.

In this Point and Figure chart of TGT, below, we have bullish and bearish information. An impressive longer-term upside price target of $121 is calculated by the software. However, a decline to $83.91 will probably weaken the chart. 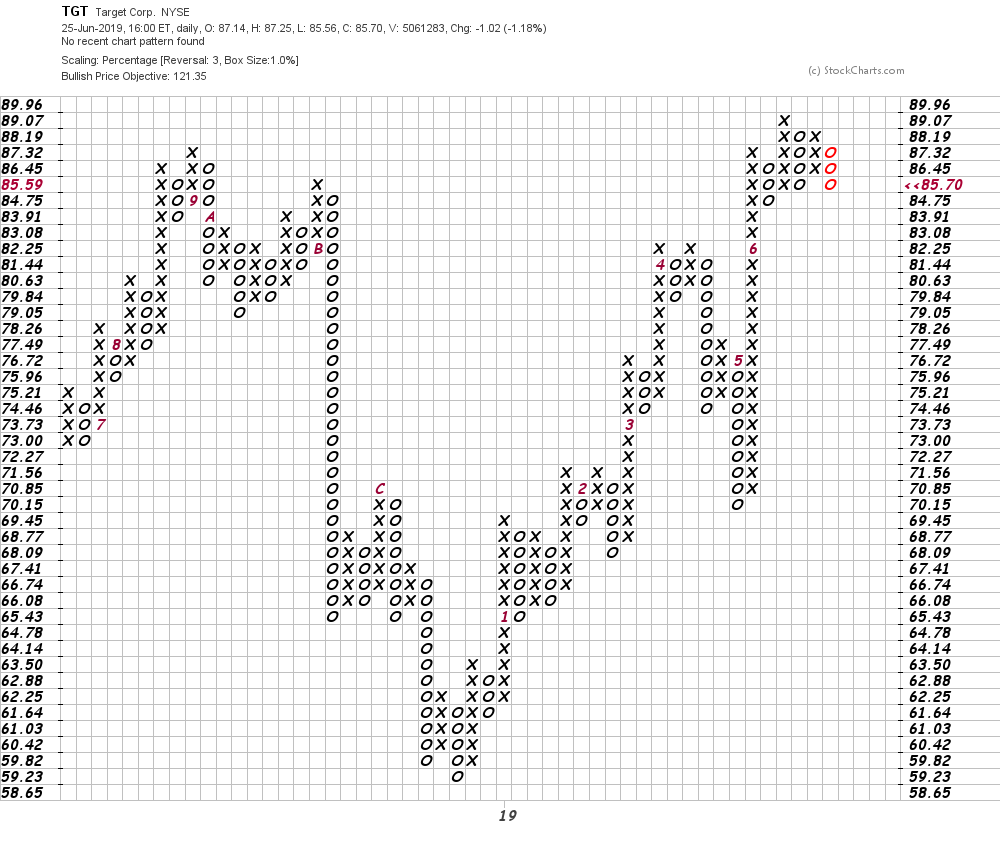 Bottom line strategy: TGT could see a sideways to lower trading pattern between $90 and $83 before it decides on its next sustained move.

Get an email alert each time I write an article for Real Money. Click the "+Follow" next to my byline to this article.
TAGS: Investing | Stocks | Technical Analysis | Consumer | Retail | E-Commerce | Real Money