On Wednesday morning big-box retailer Target Corp, (TGT) released its second-quarter results. For the three-month period ended July 30, Target posted GAAP earnings per share of $0.39 on revenue of $26.04 billion. While revenue increased 3.5% year over year, these top- and bottom-line results both fell short of Wall Street's expectations, earnings significantly so. Net earnings suffered a nearly 90% year-over-year contraction to $183 million from $1.817 billion as operating income decreased 87% to $321 million, driven by a cost of sales that increased from $17.28 billion to $20.142 billion (+16.6%).

Comp sales grew 2.6% versus expectations of 3.2%; the increase came on top of last year's 8.9% growth. This number is the product of 1.3% growth in same-store sales and 9% growth in digital comparable sales. These results compare quite poorly to the 8.4% revenue growth and 6.5% growth in US same-store sales that chief rival Walmart (WMT) reported for the same quarter on Tuesday morning.

It gets even worse. For the period, Target's gross margin dropped to 21.5% from 30.4%, pressured by increased compensation, increased headcount, costs associated with managing excess inventory and increased per-unit last-mile shipping costs. Operating margin fell to 1.2% from 9.8%, pressured by actions taken to reduce excess inventory as well as elevated freight and transportation costs.

In the news release, Target claims that current trends support prior guidance for full-year revenue growth in the low- to mid-single-digit percentage range. Target also still sees an operating margin close to 6% in the back half of the year.

Target paid $417 million in dividend during the second quarter, up 24.1% from the second quarter of 2021. Target also repurchased $2.6 billion of common stock during the quarter, resulting in the retirement of 12.5 million shares at an average price of $211.58. At quarter's end, Target had about $9.7 billion of remaining capacity under the current authorization. Who am I to judge, but Target's own statement of cash flows for the quarter shows cash required for/provided by operating activities printed at -$47 million.

Though we do not usually go through the motions of working up quick ratios for retailers, given the nature of this quarter and the uncertainty surrounding realized inventory valuations, I think we better go through the motions. Omitting inventory leaves Target with a quick ratio of 0.14. That's down from 0.46 one year ago, and that is truly awful.

Total assets come to $52.47 billion. Target does not claim any goodwill or any other intangible assets. Total liabilities less equity works up to $41.878 billion, including $13.453 billion in long-term and other debt. Obviously, the debt load is a bit much considering the size of the cash balance and the drag on performance that turning inventory into cash has become.

No, this balance sheet does not pass muster. It does not even come close and will take a lot of work, time and perseverance to improve.

Honestly, I was thinking of buying today's dip in TGT until I did the homework for this article. There's a reason Target trades at 8x forward earnings while Walmart trades at 23x and Costco (COST) at 42x. It's truly difficult to see Target undervalued, and at eight times, considering the balance sheet, cash flows and collapsing margin. The absolute ridiculousness of aggressively buying back shares and paying more year over year in dividends atop a pile of deteriorating fundamentals truly disturbs. 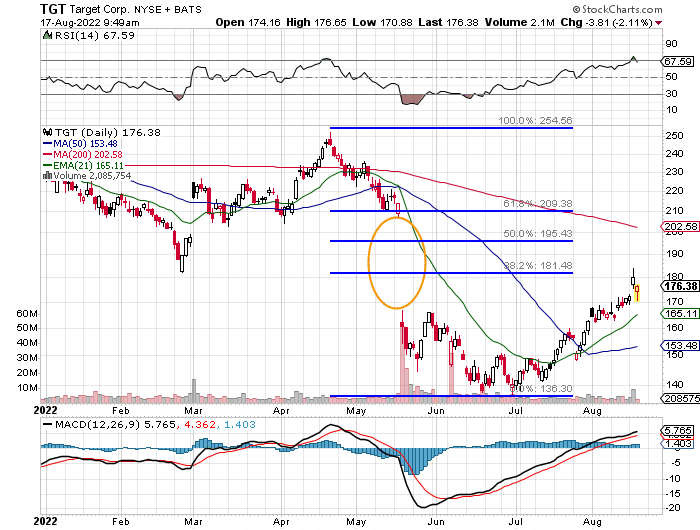 Readers will note that TGT came into earnings strong, but met rejection at nearly a precise 38.2% Fibonacci retracement of the early April through late June selloff. For optimists, the stock still needs to trade at $209 to fill that gap created when Target reported its first-quarter earnings in May. The daily moving average convergence divergence (MACD) is a little extended, while Relative Strength has flirted with a technically overbought reading.

My opinion is that I would not be interested in TGT until it works out some of its issues. Indeed, I feel that one should only own these shares on a speculative basis if one believes that things could not possibly get any worse.

Note: The idea is to place a bearish bet on TGT, but to protect oneself by limiting potential loss and paying for most of that protection through the limiting of potential profit.

Get an email alert each time I write an article for Real Money. Click the "+Follow" next to my byline to this article.
TAGS: Short-selling | Earnings | Fundamental Analysis | Investing | Options | Stocks | Technical Analysis | Bearish Bet | Consumer | Retail | Real Money