President Trump testing positive for Covid-19 is putting pressure on the markets Friday. Should support levels fail, that would be an important negative, in our opinion.

Still, the charts of the major equity indices saw some positive technical events Thursday, leaving them in a mix of positive, neutral and bearish near-term trends.

Meanwhile, the data remain mixed with one of the psychology indicators turning bearish from neutral. And has been the case for a while, valuation remains extended.

Let's break it all down for you. 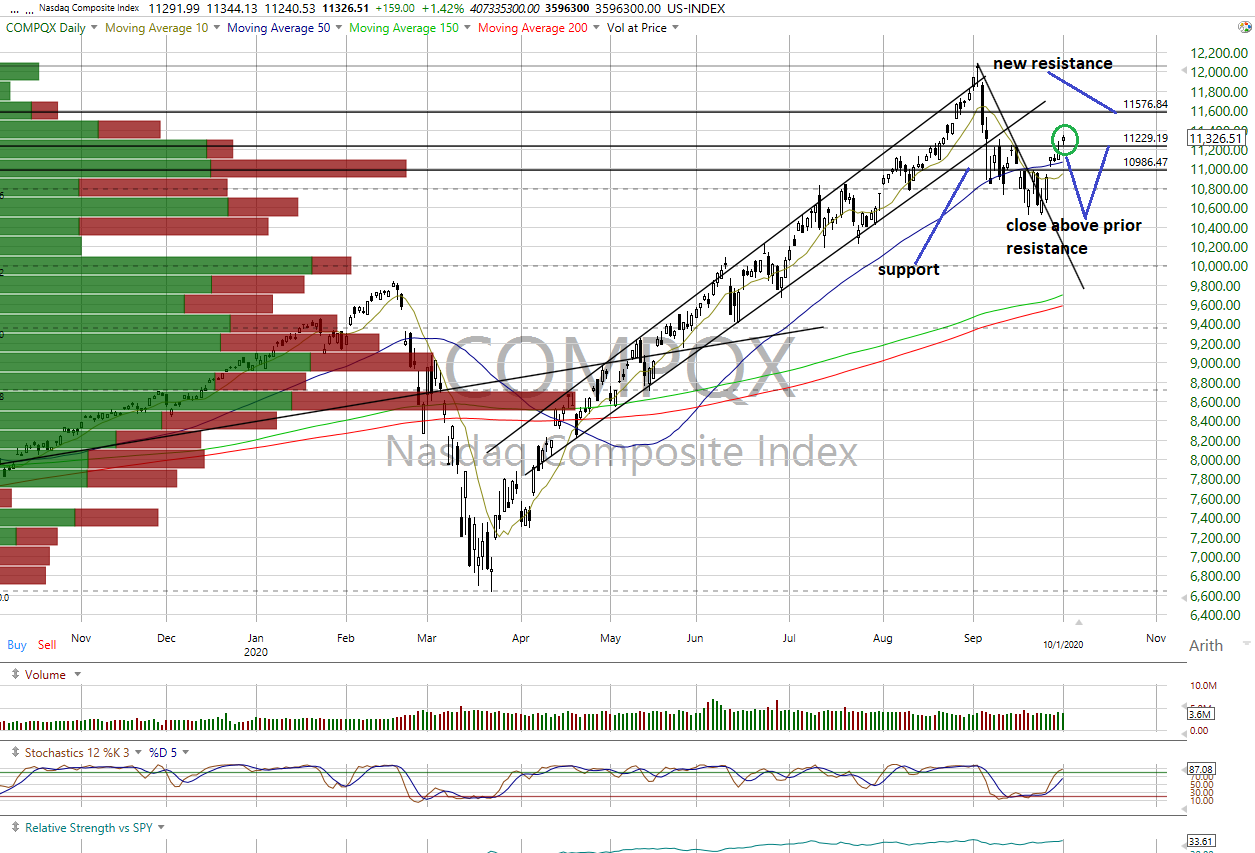 The equity indices closed mostly higher Thursday with positive internals on lighter trade. The one exception was the Dow Jones Transports closing lower on the day.

Positive technical events occurred with the Nasdaq Composite (see above) and Nasdaq 100 closing above resistance, turning their near-term trends positive.

Also, the S&P MidCap 400 closed above its near-term downtrend line and is now neutral.

As such, the trends are positive on the Nasdaq Composite and Nasdaq 100 while the Value Line Arithmetic Index remains negative and the rest neutral.

Short-term market breadth improved and is now positive on the All Exchange NYSE and Nasdaq. However, all are below their 50-day moving averages and remain negative on an intermediate-term basis from their June peaks.

The Nasdaq indices are overbought on their stochastic readings but have not yet generated bearish crossover signals.

The Open Insider Buy/Sell Ratio is neutral, lifting to 65.48 as insiders have slightly increased buying activity.

However, the detrended Rydex Ratio (contrary indicator) has turned bearish at +0.91 as the leveraged ETF traders further increased their leveraged long exposure.

This week's Investors Intelligence Bear/Bull Ratio (contrary indicator) saw a slight rise in bearish sentiment to 19.4/51.5. While not conclusive, it suggests there may be potential for the beginning of an important sentiment shift to the bearish camp should the markets slip further.

The counterintuitive percentage of S&P 500 issues trading above their 50-day moving averages is neutral at 47.5%.

The valuation gap remains extended, with the S&P 500 trading at a P/E multiple of 23.0x consensus forward 12-month earnings estimates from Bloomberg of $146.75 per share, while the "rule of 20" finds fair value at 19.3x.

While the charts improved Thursday, leveraged ETF sentiment has become too enthusiastic along with investment advisors and valuation remains extended. Trump testing positive for Covid is putting pressure on the markets. Should support levels fail, that would be an important negative, in our opinion.