We've been talking about sentiment a lot lately, and we will do so again now.

It should come as no surprise to you that the outlier, the American Association of Individual Investors (AAII), showed in its weekly survey that there was a 7-point swing out of bulls and into bears. The bulls are back to levels not seen since late June, and the bears are back to where they were in late July. This is not surprising.

But to my point that the more the market declines, the less bullish/more cautious or bearish folks become, let's look no further than the National Association of Active Investment Managers (NAAIM). I have showed this chart several times recently, noting these folks were heavily invested in the market -- over 100 indicates they are taking on some margin -- and they had gotten to 102. 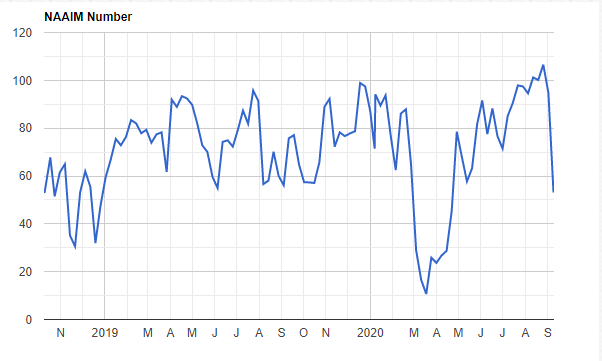 Look at that plunge!

That is what we want to see. This is back to levels it was at through most of 2019. A reading under 40 is extreme. Notice the twin lows in November and December 2018? Thus, this is on its way to showing us an extreme change in sentiment.

The put/call ratio hasn't really soared this week, but we also haven't had a reading under .80 since the decline began in the indexes. That too is a change, since prior to a week ago we hadn't seen a reading over .80 since late July. That means the ten day moving average is starting to rise. There is nothing dramatic there yet, but at least now you can see the lift in the indicator so you know there is a change in sentiment.

Clearly things have changed, sentiment-wise. I don't think we have outright bearishness yet but I do think we have more caution and a whole lot less complacency than we had even a few days ago.

As of now, the indexes for the most part -- not including the Invesco (QQQ)  -- have bent but not broken. So, let's look at that chart of the QQQs. I'm going to show you a close up. We already know the QQQs broke down from the channel they have been in since April, which indicates a change in the market.

You can see the lower channel line on the chart, but zoom in and sure the rally failed right at the underside of the broken trend line -- now, squint and you can see there is no lower low vs. Monday. And as you go through all your big cap tech stocks, I think you will mostly see the same thing: very few made lower lows.

If we can get a break under $270 next week, I think we'd see sentiment get much more bearish. It would get some of the short term indicators to extreme oversold conditions as well.