I know that many of you know who 3D Systems (DDD) is. Others may be less well acquainted. 3D Systems is an "additive" manufacturing solution business. Principally, the company engages in providing three-dimensional printing and digital manufacturing systems for clients themselves engaged in the manufacture of goods or parts composed of plastics, metals and materials from software on demand.

The firm reports results for two segments. Healthcare is focused on dental and medical devices and services. Industrial includes the provision of parts to the aerospace and transportation industries. The company markets its products through subsidiaries in North and South America, Europe, the Middle East and the Asia Pacific regions. The firm is headquartered in Rock Hill, South Carolina. Some peers would be Stratasys (SSYS) , Voxeljet (VJET) , ExOne (XONE) and Desktop Metal (DM) .

For the second quarter, the firm reported adjusted EPS of $0.12, beating Street expectations by about $0.07. After adjusting for divestitures, GAAP EPS hit the tape at $-0.08. Revenue generation for the period posted at $162.6 million. That was both a sizable beat and good enough for year-over-year growth of 45.1%. This was the fastest annual rate for the firm for any time recently. The headline revenue number does fall about 7% short of its 2019 comparison. That said, after adjustments, comparable revenue according to the firm ended up being 11.4% higher than Q2 2019.

Adjusted EBITDA margin landed at 12.4%. The firm already has in place agreements to sell off remaining non-core assets, which should take the firm's cash balance from $131.8 million to more than $500 million. This will be with no short- or long-term debt entered on the balance sheet. The way it stands now, current assets dwarf current liabilities and total assets dwarf total liabilities less shareholder equity. The balance sheet is in remarkably strong shape.

Consistent with prior guidance, 3D Systems, on an adjusted basis, still sees company-wide gross profit margin to land in between 40% and 44%. On top of the firm's cash position, which is expected to increase several fold in the short-to-medium-term, the firm has access to a $100 million still-unused revolving credit facility.

This almost forgotten industry appears to be recovering from the impacts of the pandemic. I am long the shares. Not large. I only got in this week. I do like that almost 17% of the entire float is held in short positions. That's almost a positive in 2021. Nine analysts follow the stock. None seem to have reacted to what reads a very positive earnings release. Those nine averaged are now modeling $144 million in revenue for the current quarter, which would be sales growth of 26%. 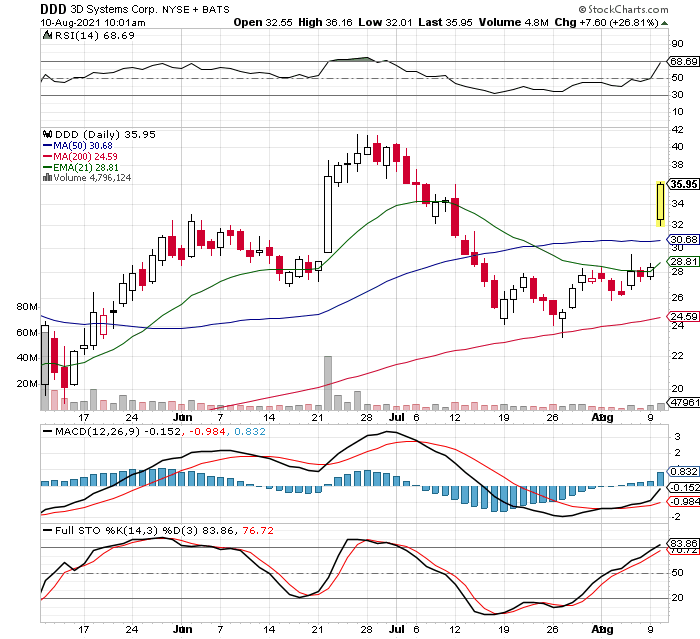 One can see that there is almost a double bottom reversal in late July. Nothing major or conclusive. Both the Relative Strength Index and Full Stochastics Oscillator are telling us that these shares are short-term overbought, as the gap between $29 and $32 has allowed the stock to retake both the 212-day Exponential Moving Average and 50-day Simple Moving Average.

I like this company, I like this business. That said, I have a nice overnight profit and I see a gap that likely fills. My plan is this. I am a mercenary. I will take my profits in the name this morning. I will also write a corresponding number of September 17th $29 puts for about $1 so I get paid waiting to reload at the bottom of that gap. Rock and roll.

Get an email alert each time I write an article for Real Money. Click the "+Follow" next to my byline to this article.
TAGS: Investing | Options | Put Call | Stocks | Technical Analysis | Trading