During Thursday's Mad Money program Jim Cramer highlighted a chemical company you might not have heard of, Eastman Chemical (EMN) . On Thursday we took a look at LyondellBasell (LYB) , another chemical name.

Eastman has a fairly short history as an independent company, but a storied history as the Eastman in Eastman Kodak. The company has many diverse end markets, from agriculture and construction, to retail, transportation, and health and wellness.

Eastman has been under pressure recently as investors fret rising interest rates and the linger effects of winter storm Uri. But unlike many chemical makers, Eastman fared the storm fairly well and is forecasting 20% to 30% earnings growth this year.

Trading at just 13 times earnings with a 2.4% dividend yield, Cramer said he's a big fan of Eastman, especially given the company's efforts in molecular recycling.

Let's check out what EMN's charts are saying.

In the daily bar chart of EMN, below, we can see that the shares have doubled in the past 12 months. EMN just broke below the rising 50-day moving average line but trading volume did not expand significantly suggesting that this could be a short period of weakness.

The On-Balance-Volume (OBV) line has rolled over since the beginning of June as it appears that sellers of EMN have become more aggressive. The Moving Average Convergence Divergence (MACD) has declined from the middle of May and is now close to the zero line and a potential outright sell signal.

In the weekly candlestick chart of EMN, below, we can see that the shares have made an impressive rally from the COVID low of March 2020. Prices are making a correction/pullback but remain above the rising 40-week moving average line.

The OBV line shows a confirming rise with prices but also shows the start of a turn lower. The MACD oscillator has crossed to the downside for a take profit sell signal.

In this daily Point and Figure chart of EMN, below, we can see a potential downside price target in the $102-$101 area. 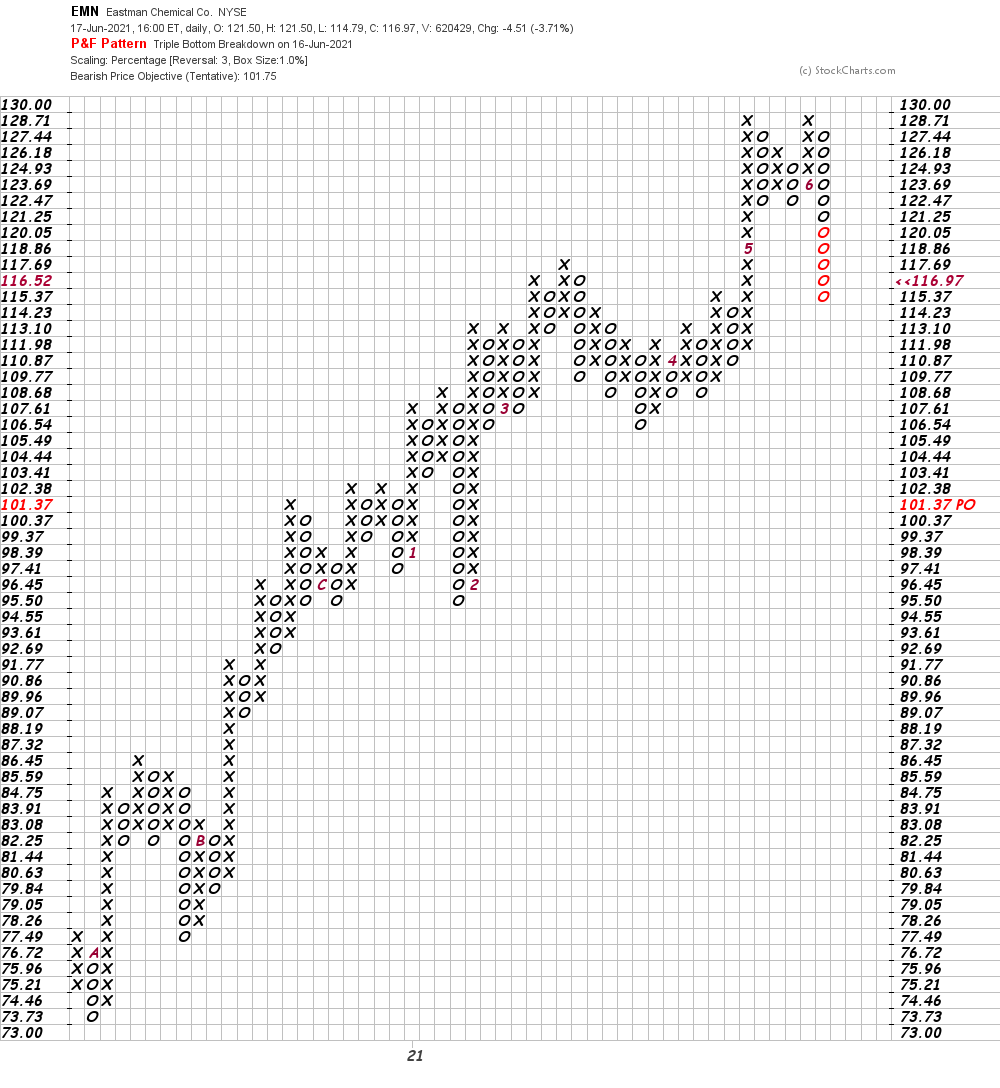 Bottom-line strategy: After a triple from the March 2020 low a pullback should not be a big surprise. The Point and Figure chart suggests a correction to the $101 area is possible. Let's stand aside for a few weeks and let this correction unfold. If buyers become aggressive before reaching $101 or so it will be a sign of strength.

Get an email alert each time I write an article for Real Money. Click the "+Follow" next to my byline to this article.
TAGS: Investing | Stocks | Technical Analysis | Chemicals | Mad Money