Zelnick said Take-Two is growing on the strength of its great titles, like the new NBA 2K22, which is exceeding expectations. They're also excited for many of its newer franchises, like Tiny Tina's Wonderlands, which has also outperformed.

When asked about the acquisition of mobile gaming company Zynga (ZNGA) , Zelnick explained that Zynga has a ton of great mobile titles that are the perfect complement to their existing games. Take-Two will operate Zynga as they do their other acquisitions, as an independent division that is free to follow their passions.

In our May 16 review of TTWO we wrote that "I have no special knowledge of what TTWO is going to report after the close of trading Monday but the current state of the charts and indicators suggest the worst is priced in and some sort of rebound rally is possible. Only nimble traders need apply."

In thr updated daily bar chart of TTWO, below, we can see that the shares gapped higher Tuesday and closed strong (near the high of the session). The slopes of the 50-day and 200-day moving averages have not changed and bottoming in the 50-day line will take time.

In the weekly Japanese candlestick chart of TTWO, below, we can see a bottom reversal pattern -- a hammer followed by bullish confirmation. Candles do not give us price targets. The slope of the 40-week moving average line is still negative and will lag the price action.

The weekly OBV line is starting to turn up and the MACD oscillator shows a slight narrowing.

In this daily Point and Figure chart of TTWO, below, we can see a potential upside price target in the $165 area. 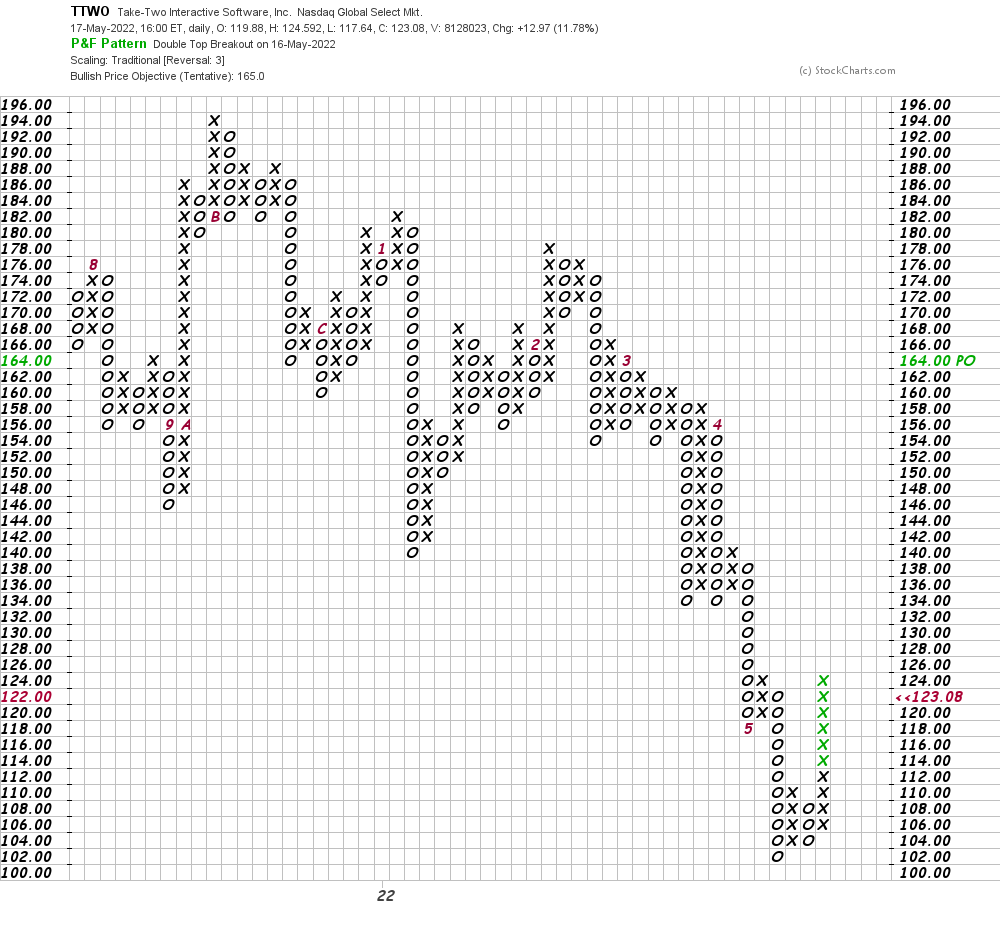 Bottom-line strategy: Traders who were gutsy enough to go long TTWO ahead of their earnings release should hold those positions. Risk to $110 for now. The $150-$165 area is our tentative price objective for now.

Get an email alert each time I write an article for Real Money. Click the "+Follow" next to my byline to this article.
TAGS: Earnings | Investing | Stocks | Technical Analysis | Software & Services | Gaming | Mad Money | Executive Interview