Zelnick said Take-Two saw broad strength across many of its titles and net bookings topped $1 billion for the quarter. He noted it has taken a lot of hard work to get to where the company is now, a place where consumers are engaged with new releases and stay engaged between releases.

Take-Two is seeing strength in both console gaming and more casual mobile gaming. In both cases, Zelnick said, the pandemic has reintroduced many people to gaming and new communities with which to share those games.

We last looked at TTWO on Aug. 11 and wrote at that time, "TTWO has broken out from a large consolidation pattern but it has reached or almost reached two price targets on the Point and Figure charts. Some sort of sideways to lower correction could unfold in the days and weeks ahead. Buyers could monitor this anticipated correction for a buying opportunity."

Prices did weaken from August into September, so let's check out the charts and indicators again for Take-Two, which is a holding of Cramer's Action Alerts PLUS charitable trust.

In this updated daily bar chart of TTWO, below, we can see that prices made a low in September and a retest early this month before rallying back to the early August peak. Prices are trading above the bottoming 50-day moving average line and above the rising 200-day moving average line. The daily On-Balance-Volume (OBV) line has been flat/stable since early August but looks like it is turning upward to a new high, telling us that buyers of TTWO have become more aggressive again. The trend-following Moving Average Convergence Divergence (MACD) oscillator moved below the zero line in September for a sell signal and then hugged the zero line in October. Now the MACD oscillator is turned back to the upside for a buy signal.

In this weekly bar chart of TTWO, below, we can see a positive picture. Prices are in an uptrend and close to a new weekly high close. TTWO is trading above the rising 40-week moving average line. The weekly OBV line is generally positive and the MACD oscillator is above the zero line and starting to narrow toward a new buy signal.

In this daily Point and Figure chart of TTWO, below, we can see that prices are close to a fresh upside breakout. A price target of $232 is shown now. 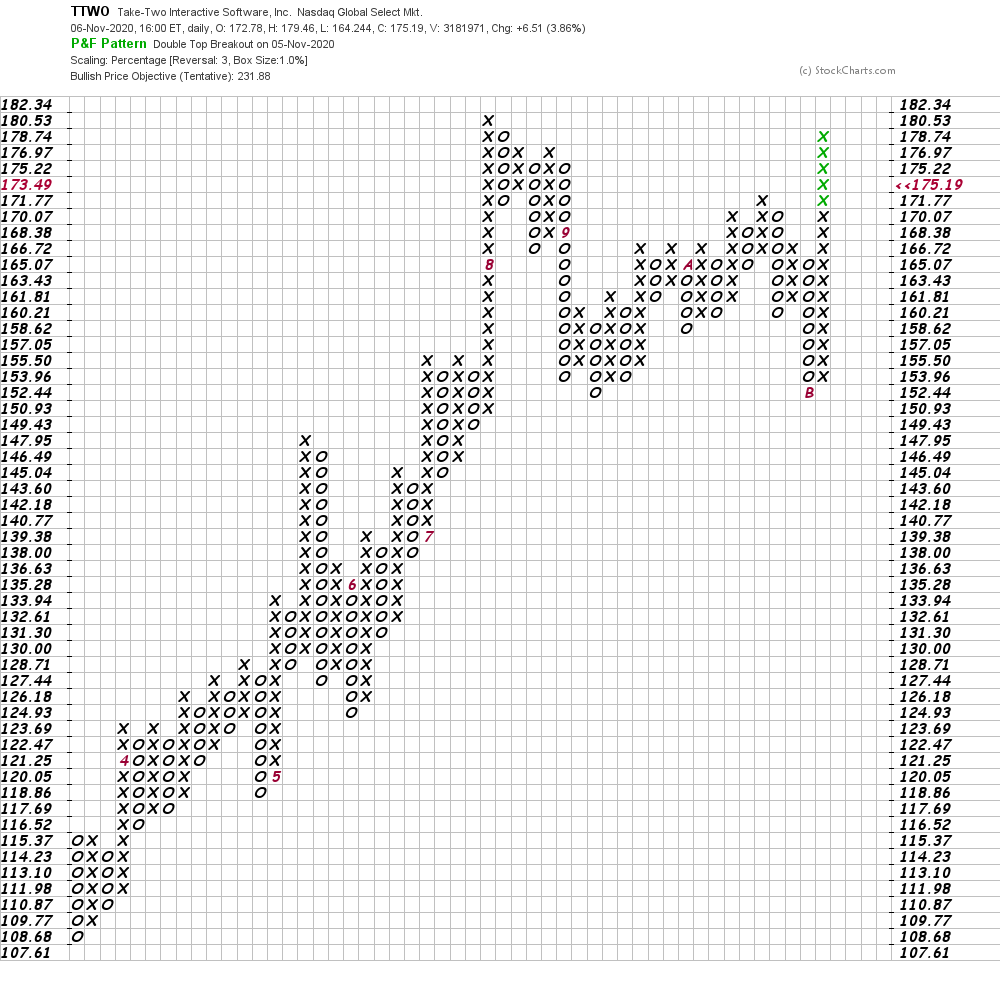 Bottom line strategy: I assume some traders are long and used the August-September correction to buy. Risk a close below $160. Add on new highs and look for gains to the $232 area.
Get an email alert each time I write an article for Real Money. Click the "+Follow" next to my byline to this article.
TAGS: Earnings | Investing | Stocks | Technical Analysis | Consumer | Technology | Video Games | Mad Money | Executive Interview | Real Money | eSports