Time To Take Some Profits?

The short answer is... perhaps. Usually, when I answer my own uncertain question with an uncertain answer, I act in a measured, disciplined way. I look over my book. At this point, I would think it likely that at least some target prices have been pierced to the upside. There is no harm in resetting a target price, as long as at least some profit is shaved.

You do know the saying "pigs get slaughtered" is the lament of the experienced trader, right? Everyone among our ranks has disrespected a target price at some point, and then felt quite stupid when taking a loss down the road on the same piece of merchandise.

Most European markets opened on Wednesday morning at a slight discount to their Tuesday closing prices. This has put some mild pressure on U.S. equity index futures as late night melts into early morning. U.S. markets on Tuesday reversed a mid-morning selloff to close near the day's highest levels ahead of President Trump's State of the Union address well after the bell. I think perhaps a little too much was expected by the marketplace ahead of the event. The President did make a case for some of his agenda's more-contested objectives, such as the wall on the southern border. In return, the President offered the other side, a united front regarding some of their objectives, such as an infrastructure rebuild, and a renewed effort to lower drug prices.

Are overnight markets reacting with some negativity to that speech? Are they merely responding to market technicals? Perhaps, the powers that be expect Jerome Powell's town hall event scheduled for Wednesday evening to actually be the greater threat, if it is that Powell sees the recently "strong enough" domestic macroeconomic data as strong enough for a more sentient central bank to stay on course, or at least publicly opine on doing so.

Lay of the Land

I have been working to reduce already high cash levels in recent weeks. This, for me, is a slow process, as chasing stocks on the run is not something I do. A headwind for nearly all asset classes will be the strength of the U.S. dollar that, despite that very public pause intimated by the Fed in regards to the trajectory for short-term rate policy, just does not soften. A U.S. economy that so far is holding up better than nearly all other developed economies has put a bid under the greenback. Now, take a look at the S&P 500, our broadest, and most significant index and measure of U.S. equity markets. 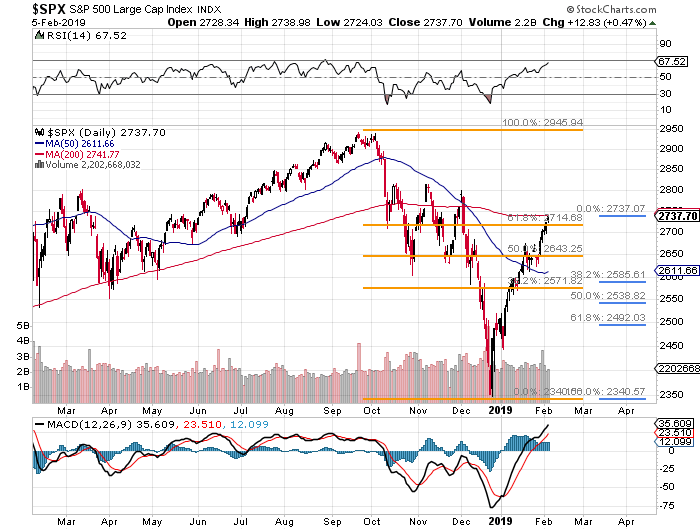 While the president did discuss ongoing talks with China that would require real, structural change, that may not be what gives pause to equities here. If the negative action seen overnight spills over into the regular session, it may be as simple as meeting resistance at the 200-day SMA (simple moving average). That's the thin red line above, currently 2741. The index peaked at 2738 on Tuesday, and you will notice that more than any other often-used moving average, this line served as a fluid line of support throughout most of 2018 into October, and then as loose resistance ever since. We probably have to respect this line.

My thoughts on this are laid out in relation to current conditions. Obviously, clearly positive headlines on trade will lead equity markets much higher short term, to fight this battle at a different level. Conversely, anything regarded as disappointing by keyword-reading algorithms could allow for significant decay in asset prices without doing significant damage to this confirmed uptrend (in my opinion...).

You see that blue line at the 2585 level? That spot would be a 5.6% decline from Tuesday night's close, as well as a standard 38.2% retracement of the Santa rebound. On that, I think it is necessary to understand that this nearly parabolic move off of those lows now leaves the index in a place where appropriate risk is priced in, given that forward-looking earnings are far less fancy than what traders see in the rear view mirror. There has not been a bearish crossover seen in the daily Moving Average Convergence Divergence all year. Relative Strength is sending signals that illustrate a nearly overbought market condition as well.

The marketplace can still go higher from here -- and if it does, I will gratefully accept the donations. That said, short-term risks are now skewing slightly to the downside, though the threat is not yet overwhelming. Simply put, I think the time has come for the slope of price discovery to normalize a bit. This would create a better environment for fundamental analysis types, also known as stock pickers. After all, if monetary policy can be flexible, why can't we be flexible in our response?

On That Dollar... and Oil

Speaking on central banking, the Bank of England meets on policy tomorrow (Thursday) morning, the European Central Bank, not for another month. Much of the current rally in equity markets, whether it makes a lot of sense or not, had correlated quite well with the rebound in crude oil pricing. Crude, which is really a proxy for the pro-growth trade, as well as gold, which is really a hedge against that trade, both rely on the dollar easing a bit. Even if the Federal Reserve plays ball, they'll need some help from Europe and China in getting this done.

I see WTI Crude trading as high as $61 later this year. I see physical gold hitting prices as high as $1390 later this year, but that only happens if the dollar can catch a break. If you happen to also be long the exploration and production group that I've been touting since mid-December, beware of this $51.50 to $52 area that crude seems to be falling close to this morning.

This spot is a swinging gate that opens to $46 oil. For me, my long positions in BP PLC (BP) , Chevron (CVX) , Exxon Mobil (XOM) , and Royal Dutch Shell (RDS.A) have all responded well to earnings. I look for a chance to extract some capital in a partial way from these names. The trick is adding sold portions back on at prices that increase share count, thus also increasing aggregate dividend revenue, as this is the one industry group that both pays the shareholders well while exposing those same investors to upside growth potential.

Understand what you see before you. Yes, Snap Inc. (SNAP) posted better-than-expected earnings and revenue. Operating Cash Flow improved. That's all true. Daily active users also printed above consensus. Still, those earnings and operating cash flow numbers come with minus signs to their front. Those daily active users are flat from last quarter.

Basically, the market is celebrating a firm that lost money, but less than expected. Guidance? Only better than what is seen to the rear. Ebitda is still expected to be a loss of $-165 million to $-140 million. So, what really is going on here? I mean, not that I know, because I am not a consumer of this product, but word is that other more widely used social media companies such as Facebook (FB) can do whatever these guys can do. So, short the name, Sarge?

Not so fast, my friends. As of mid-January, 139.28 million shares of SNAP were held in short positions. The entire float is just 784.2 million shares. That's roughly 17.8% of the float. In addition, that short interest number was up from 128.96 million shares in mid-December, meaning that this aggregate position grew by 10.32 million shares, or 8%, in just that one month. This means that some of the increase in share price for SNAP overnight is simply the result of a short covering in my experienced opinion.

I don't think I will touch the equity, but if a trader could get long puts expiring, let's say, in April, for less than $0.85, with a strike price close to the last sale early on Wednesday morning, I think that might make sense. For those itching to get long the name, purchasing such a put makes even more sense -- but I wouldn't. That's just me.