Kurtz said the bad guys are taking advantage of the Covid-19 crisis to prey on those working from home. Ransomware attacks are becoming big business, he said, and there is little people can do to stop them.

That's why CrowdStrike has become an essential service for many companies.

When asked whether working from home is here to stay, Kurtz said he expects a percentage of employees will be staying at home permanently. "This is not a one-time hit," he said.

We looked at the charts and indicators of CRWD on Monday, where we wrote, "I have no special knowledge about the upcoming earnings for CRWD but the price action tells me that traders are anticipating a strong report. Prices could make a temporary dip after the report from profit taking but the uptrend remains strong. Raise stop protection to $70. $100 and $119 are our price targets now."

CRWD reached our first price target of $100 but let's take a quick re-check to see if anything has changed significantly.

In the updated daily Japanese candlestick chart of CRWD, below, we can see the rally, which shows that prices above $100 were rejected Wednesday -- note the upper shadow. There are also a lot of red candles in the rally, telling us that prices often closed below the opening, which is not the strongest set up.

The slopes of the moving averages have not changed from Monday and the On-Balance-Volume (OBV) line has soared to a new high to confirm the price gains. The 12-day price momentum study in the lower panel shows a bearish divergence with the price action -- prices have made higher highs from early April but price momentum has slowed. This divergence could be foreshadowing a correction.

In this weekly candlestick chart of CRWD, below, we can see that the candles on this time frame are white or bullish in that prices closed above the opening. The week is not over but here, too, we see the upper shadow above $98. The other indicators are still positive.

In this updated daily Point and Figure chart of CRWD, below, we now see a potential price target of $162, which is up from the $119 price target calculated on Monday. Impressive. 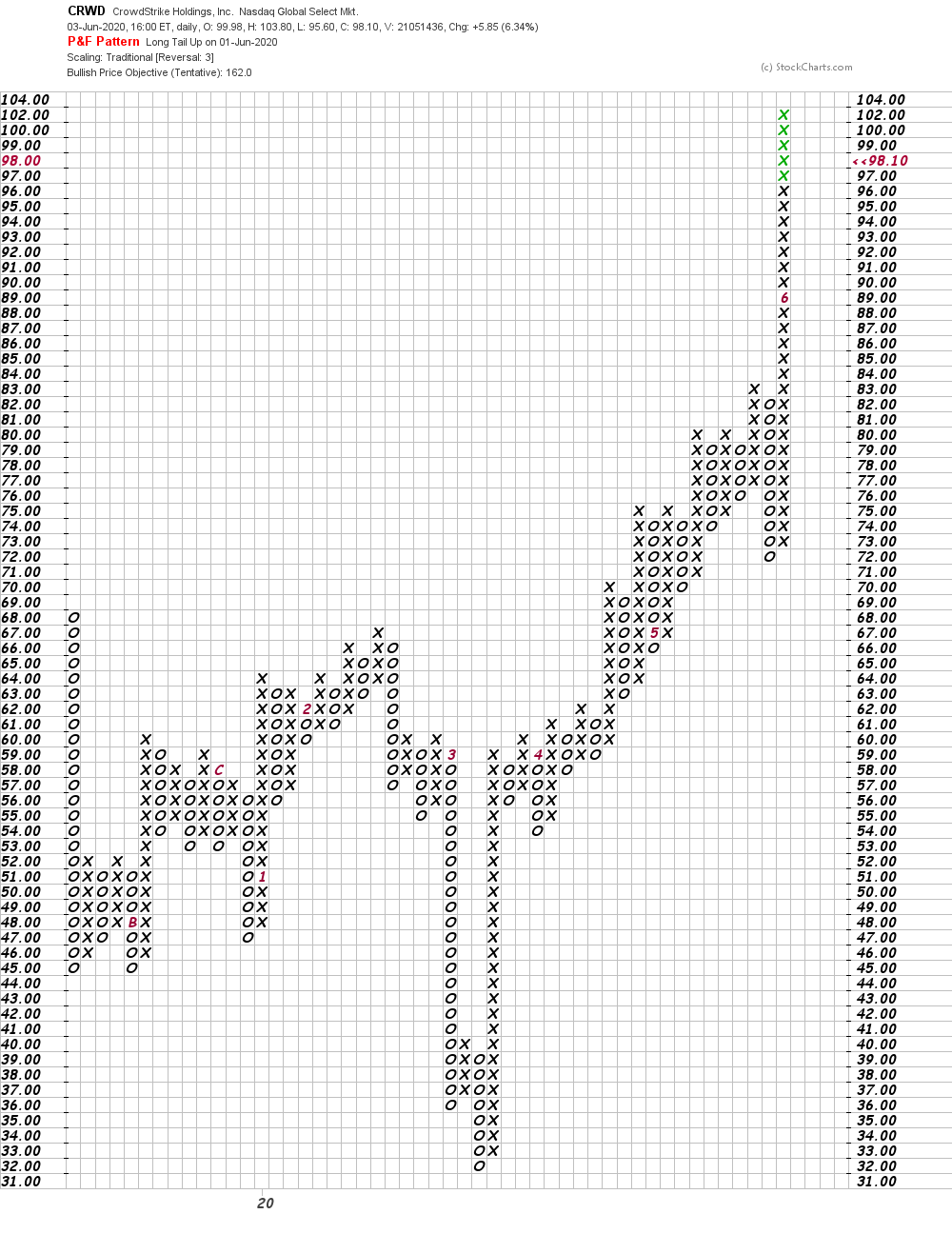 Bottom-line strategy: CRWD reached a price target and looks extended so a pullback or correction could be expected now. Traders should consider booking some profits and raising the stops on the balance of their longs to $80.

Get an email alert each time I write an article for Real Money. Click the "+Follow" next to my byline to this article.
TAGS: Investing | Stocks | Technical Analysis | Cybersecurity | Technology | Mad Money | Executive Interview