By TIMOTHY COLLINS Feb 23, 2021 | 12:13 PM EST
Stocks quotes in this article: TSLA, CCIV
There aren't many plays to hide out here, if you're in growth land, crypto world, or SPAC territory (that's "special purpose acquisition company," for those not in the loop).
It's some brutal selling with many different potential causes. Was it Tesla ( TSLA)  or maybe the ARK funds or Churchill Capital IV ( CCIV)  and its deal with Lucid? It could be the simple overheated valuations or the struggling bonds.
Honestly, I'd say it's a little bit of everything. I do know one thing: Value folks and bears are having a field day right now.
After going through CCIV for Lucid, it's not a terrible deal, if you are bullish on the sector and truly think Lucid can challenge Tesla. It's worth noting that Tesla is seen as much more than a car company. I'd counter that Lucid has some tech angles of its own, but, no, it won't get the same leeway Tesla gets.
The deal structure itself came across as "confusing," because it is one of the rare instances where we saw a private investment in public equity offering priced above $10. (Remember, PIPE allows for snagging these publicly traded shares more cheaply than their market value.) Again, I see this as a benefit. Also, the projected enterprise value took into account public warrants on the dilution side. The only thing not accounted in the valuation was the Founder shares and Founder warrants that add an additional 46.82 million shares to the float. Given the float is 1.6 billion shares, this is a somewhat insignificant number. Also, the exercise prices and lockup on the shares and warrants don't put them in a position to damage valuation or act dilutive any time soon.
This was a case of too much hot money, too much confusion on a slightly different structure, and too much in terms of expectation. Way too much. Now, I sound like a Dave Matthews Band song.
We've likely rattled enough cages, though, on that name on Tuesday morning for it to find a new range. I see the $55-$60 area as a hard ceiling now. So many traders that were buying into the DA (Definitive Agreement) announcement that are likely begging to get out even. I see the chart setup like this with the $30 to $35 area being those that sold early, then watched it run, wanting to come back versus those trapped in the $52.50 to $60 range. 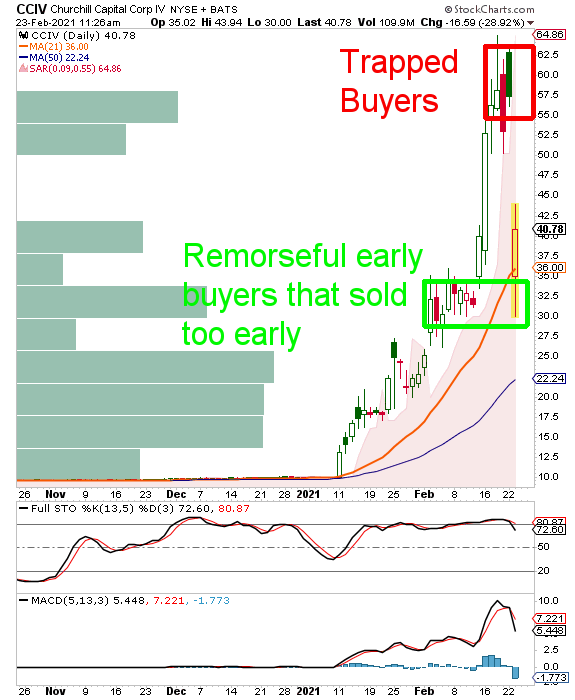 Next, we need to establish if we are going to trade between $35 and $45 in a wide channel or will we break down or start a stair step higher. If I'm a bull or a buyer Tuesday, I don't want to see us close under $35. That puts $28 to $30 into play. At those levels, I need to make tough decisions. If I'm a bear, I don't think I want to see this close above $40. There's too much air between $40 and $55. Plus, there remains a limited amount of shares to be traded and Lucid execs will continue to get a lot of airtime. This is a name I expect analysts to chime in on quickly, as well.
I favor it a short-term trading name with a little more room to the upside despite the aggressive $60 billion-plus market cap we're staring at around the $40 range. Again, I believe today's close will dictate a lot of what we see next. Above $40, and my bias leans higher. Between $35 and $40, I see a trading range. While below $35 has me leaning toward $30. The $25 to $30 area is definitely a level that interests me.
I still hold some skip strike call butterflies on the name. My current breakeven sits around $40, but I think I'll be looking at an adjustment later this week after we have another trading day or two under out belt.
Get an email alert each time I write an article for Real Money. Click the "+Follow" next to my byline to this article.
TAGS: Investing | Investing basics | Stocks | Electric Vehicles

SailPoint Technologies Rally May Pull Into Port for a Bit

The provider of identity management software recently is seeing more of a balance between buying and selling in its shares.

Two potential top reversal patterns on the weekly chart give us pause when it comes to buying the aggregates supplier's shares now.

Here's Why Qurate Is a First-Rate Investment

QRTEA has blowout earnings and cheap valuation. What's not to love?