Taiwan Semiconductor Manufacturing Co. Ltd. (TSM) reported fourth-quarter results largely in line with estimates. However, it guided revenue for the first quarter of $7.3 billion to $7.4 billion, well below the $7.86 billion estimated by analysts. That would be down about 14% from a year earlier and the largest revenue drop in a decade. Ouch.

The stock is lower in early trading on Thursday so let's check out the charts and indicators for some technical guidance.

In the daily bar chart of TSM, below, we can see that prices have been under selling pressure for much of the past year and touched a new low for the move down earlier this month. Prices are below the declining 50-day moving average line and the bearish 200-day line. In November the 50-day line fell below the 200-day line for what is commonly called a death cross or sell signal.

The volume pattern is hard to interpret but the daily On-Balance-Volume (OBV) line shows a bullish rise from late April to early September and then a bearish decline to late December. The OBV line has improved a little since late December and this might be a positive clue going forward.

The trend-following Moving Average Convergence Divergence (MACD) oscillator gave a sell signal in early October and a cover shorts signal in late October. Despite prices weakening the past three months the MACD oscillator has crept back to the underside of the zero line.

In the weekly bar chart of TSM, below, we can see that prices more than doubled in the past three years but a large top pattern can also be seen between $36 and $46 since October 2017. Prices are below the declining 40-week moving average line.

The weekly OBV line is pointed down from September. The weekly MACD oscillator is in bearish territory below the zero line but narrowing toward a possible bullish crossover.

In this Point and Figure chart of TSM, below, we can see a downside price target of $31.69 for TSM. This would be a new low for the move down and could open the way to further long-term declines. 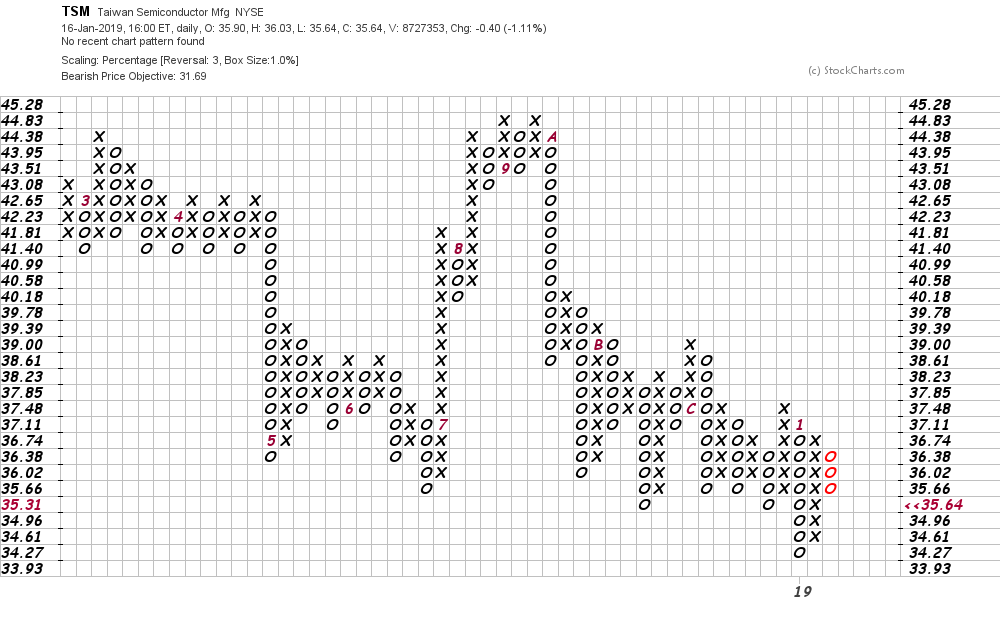 Bottom-line strategy: TSM is likely to be under selling pressure Thursday and the Point and Figure chart is projecting new lows ahead but prices have declined a lot since early October to discount a fair amount of bad news. Traders and investors should stand aside to see if prices hold the recent lows or break to new lows.