You could say Syntax, an innovative index provider and fund issuer, is ahead of its time. I found this out when I met the firm in its earlier days several years ago, when it was already trying a new approach to classifying companies in the index space.

Before I get into Syntax, a quick index history lesson is in order. The large, established index providers like Standard & Poors and, before they were acquired, Dow Jones, started life as publishers. With that role came the mindset of a cataloger, which is: "A place for everything and for everything a place." In the late 1800s and early 1900s, this mindset was well suited to mapping out the equity securities landscape. Companies generally tended to have one main source of revenue. Because of this, grouping companies into functional buckets was relatively easy, made sense and helped investors make understand the markets. This mindset persisted, even as new firms like MSCI, launched in the 1960s, and, Russell, launched in the 1980s, came to bring their own views on indexing to the world. The only problem with this approach was that it increasingly created issues for investors, like the infamous S&P Motorcycle Manufacturers index, which had Harley Davidson (HOG) as its sole constituent. That was the case of an interesting index that may be ... useful? Not so much. Another issue with this approach came in to form of companies that not only began to expand vertically, but horizontally, bringing in revenue streams from various businesses, increasingly from completely different lines of business.

The issue here is that the structure of equity classification just didn't have any effective way to categorize companies that did more than one thing. Things really got out of hand after the dot-com bubble when almost every company became a technology name due to the amount of hardware and software employed to drive company profits. The point is that the economic realities of the 21st century just don't fit the equity classification structure of the 19th century.

Essentially, Syntax's approach is to deconstruct each company's revenue stream and slot each stream into its own bucket, and, most importantly for classification purposes, allow one company to reside in multiple sectors, industries, and sub-industries. This moved away from the "winner takes all" label approach. One example here is how Syntax on its website views Uber (UBER) , which it states, "creates software used to facilitate consumer transportation" and then asks "does this make it an Industrials company or a Technology company?" To Syntax, the answer is the same as the little girl in the Old El Paso ad, which is why Uber sits in both sectors.

Now that Syntax has an accurate accounting of where company revenues are coming from, how does it go about translating that information into a usable index? I'll quote the title of Fun Boy Three & Bananarama's 1982 top ten hit "It Ain't What You Do it's the Way That You Do It" to transition into how Syntax goes about determining the constituent weights of its indexes.

Because Syntax has created a classification matrix instead of discrete buckets, how does it go about setting weights for the index that is used as the underlying one for its S&P 500 Index-based ETF, the Syntax Stratified Large Cap ETF (SSPY) ? The answer lies in the "Stratified" part of both the index and fund name.

Reading through the index methodology, stratification is described as "a common technique used in statistics." After some quick web searching, it turns out that stratified sampling has to do with treating a group of items not simply as one entity as you would do with a simple average or finding the median value in a sample but rather, measuring through a number of sub-groups within the entire population and optimizing those results into final scores. What does this look like in practice? Let's take a look at SSPY as compared to its market capitalization weighted cousin, the SPDR S&P 500 ETF Trust (SPY) .

The only difference between the strategies of SPY and SSPY is that security weights are set using market capitalization in SPY and Syntax's Stratified-Weight approach in SSPY. SPYY launched Jan. 4, 2019 and as you can see from the below graph has spent much of that time trailing SPY on a cumulative return basis since launch. 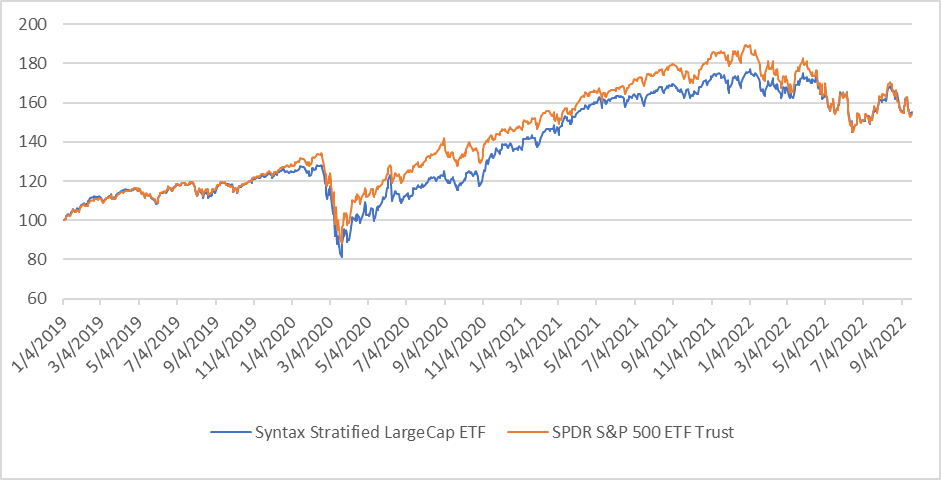 My take on these results is that timing is everything, and if you look at performance from the March 15, 2020 Covid lows to Sept. 16, SPYY returns an annualized 20.04% as compared to SPY's 15.39% annualized results. Even looking at year-to-date results through Sept. 16, as you can see from the table below SSPY does a good job outperforming SPY over that period.

My take on these results is that as we shift into this next phase of the markets, the days of narrow and sustained rallies will become a thing of the past. In other words, we will be returning to a regime in which company fundamentals will once again be a key determinant of company valuations. Syntax's ability to accurately identify, categorize and allocate across companies both in its indexes and ETFs give its broad market and sector products a clear advantage.

Get an email alert each time I write an article for Real Money. Click the "+Follow" next to my byline to this article.
TAGS: ETFs | Index Funds | Indexes | Investing | Stocks