Think of it this way for the S&P 500: Thursday, the S&P was down 52 points. Friday it was up 50 points. Monday it was down 56 points. It's all an area, hovering in the 4300 zone. That's a lot of up/down/up/down, but no real movement. So what changed on the chart? Not much. It looks a bit droopier and it's closing in on the July low of that 4250 area, but does it look drastically different than it looked coming into Monday morning? Not to me.

Oh, maybe because the head-and-shoulders top is more pronounced now.

Nasdaq isn't much different. Sure it has more of a tail coming off that move from late last week but step back and look at a year to date chart of the Invesco QQQ (QQQ) . The uptrend line comes in around here. And the July low was around here. Did the chart change dramatically? Not to my eyes. What would change it -- in dramatic fashion -- would be a solid break of $350 because that we could see without wondering, did it really break?

So did the indicators change? Not much changed there, either. You see, breadth wasn't terrible on Monday. The New York Stock Exchange saw net breadth at negative 1,000. Friday it was positive 1,350. So net-net, if we add up Friday and Monday, we get the S&P down by seven points and net breadth +350. Isn't that the same thing that has been going on for a few weeks?

There was a minor change in that the Overbought/Oversold Oscillator actually ticked up over the zero-line. Keep in mind my Oscillator is based on breadth, not price and breadth has not been terrible. That means using this metric the market is not oversold right now.

The 30-day moving average of the advance/decline line is also not oversold as it sits right above the zero-line.

The number of stocks making new lows increased to more than last week, but still fewer than the August low. 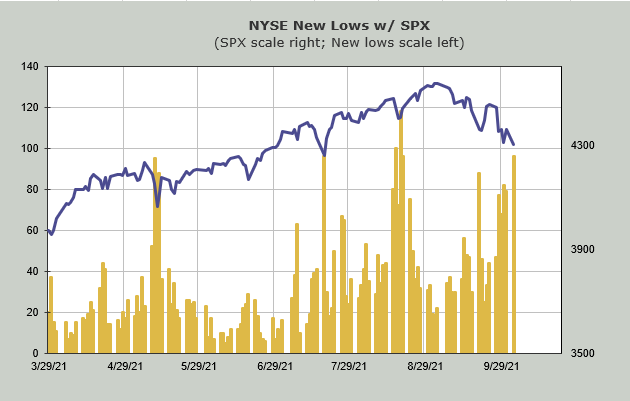 But look at the intermediate term Hi-Lo Indicator. It hasn't budged. It still hovers in the 40% area. I will grant you that the last four times this got oversold, it did so from this general area, but a good oversold condition comes under 20%. I would also note that the last peak in this indicator was under 80%, so it has come down from a lower high. 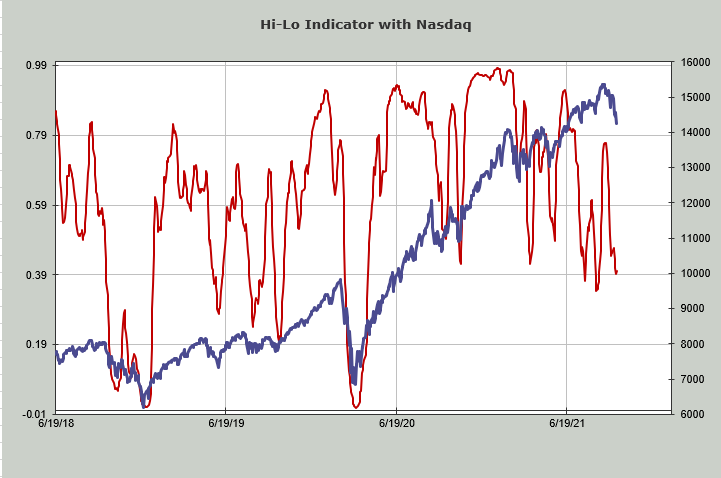 I believe the selling in the beloved tech stocks has caused some concern, but I don't think it has caused any real panic. To me this is the generals finally playing catch up to what the troops have been experiencing since July.

I suspect the market has a rally attempt on Tuesday, but overall I think there is still more work to be done.