Up in the morning way before the rising sun. Every day. Buckle down. Time to try to find a way to make some money. No different from any other day. This time, the "yesterday" was indeed very different. The action on Thursday was most certainly risk on as equity markets enjoyed some of their most aggressive performance seen in months, and while the appetite for the longer end of the U.S. Treasury spectrum was just as strong.

Is this behavior earnings related? Could be. Earnings have been solid so far. That said, we are still in the first inning and most of the large firms reporting thus far have been from one industry. For the most part, the banks have reported outsize beats borne of their individual reserve releases of capital that had been socked away to deal with pandemic-related credit risk. Safe to say that sizable releases of such stowed-away reserves are indeed a vote of confidence in an economy that by most metrics has shown inconsistency at this stage of the recovery.

Beyond that, acoss a number of banks consumer banking seems strong and asset management and investment banking have been producers, as has equity trading. Fixed income not so much, but not to the point of harming broader results. The underlying signal might be that if for the bankers the consumer, wealth management and investment banking businesses are strong, then the dominoes are indeed lined up should the already mentioned "headline" vote of confidence actually bear fruit.

I would still expect to see more signs of and hear more talk of margin pressure, but the first few days of the season have gone about as well as anyone probably had a right to expect. For me, the almost-stunning demand by foreign accounts for the majority of newly issued U.S. 10-year and 30-year debt this week was the story, and as much a catalyst as anything else. European traders have started selling the five-year note out through the 30-year very early this morning. So far, no negative effect on U.S. equity index futures. Still, a long day ahead.

If there was ever a day where just about everything went right for net-long portfolios, Thursday was that day. Let this sink in: All 11 sector select SPDR ETFs finished in the green, with Materials (XLB) and Technology (XLK) leading the way. Even more interesting than what led the market was what lagged. The Consumer Discretionary SPDR (XLY) finished in 11th place, up 1.05% for the session. That's no misprint. An increase of 1.05% was good enough for a last-place finish. No theme. Cyclicals, growth, even defensive sectors were all scattered about through the daily performance tables, and all were in strong demand.

Equity market breadth was strong yet again as winners beat losers downtown by a rough 7 to 2 and up in midtown by almost 2 to 1. Advancing volume bested declining volume by very similar margins at both of our primary exchanges.

From a technical perspective, risk-on behavior on increased volume means that there was professional accumulation. In other words, this is the kind of confirmation that I look for to call it a day for a market that had undeniably been in correction.

Readers will note the rising "up day" trading volume at the lower right. Readers will note that the index took the 21-day exponential moving average (EMA) on momentum but stalled ahead of making a run at the 50-day simple moving average (SMA). The index still needs to fill the late-September gap, which for me almost ensures a test of that 50-day line. There is a "however" coming. However, the index also created a new gap on Thursday's opening, and at some point, as this is the season of volatility, that gap will in all likelihood try to fill, meaning that though the index is no longer in correction the index is probably not completely done with the 21-day EMA.

Readers will see almost the exact same setup for the S&P 500. The difference here is that the late-September gap has already filled and the index actually made contact with the 50-day SMA. There is still the gap created on Thursday morning, but it is smaller. Though the volume appears more convincing for the Nasdaq Composite, the S&P 500 is actually a little more developed... a little more on its way toward the next stage.

Opportunity will call. More than 90% of the earnings season lies ahead, as do changes in monetary policy as soon as three weeks from now and the fiscal melee that beckons a month after that. This makes forward-looking allocation a little tougher to call than it might usually be. I have been telling you for a few weeks now that I had been redeploying the increased cash balance built in August.

That cash balance, though far smaller than it was two to three weeks ago, is still larger than it was back on those lazy, hazy, crazy days. I am convinced that I am on the right track, and while I always reserve the right to change my mind I will continue to deploy cash on weakness while shaving longs as they hit target. Zscaler (ZS) hit its target on Thursday. I didn't exit the name, but did reduce as I am nothing without my parents, my faith and a code of discipline. My target price for ZS is currently "under review," which means I don't have a new one yet. I do my major chartwork session for the week on Sunday mornings.

Cryptocurrency exchange name Coinbase (COIN) publicly urged Congress to create a single federal crypto market regulator instead of applying existing regulations to digital assets on Thursday. This "new" and still conceptual regulator would be responsible for registering and supervising markets for digital assets to ensure against fraud and manipulation. The new regulator would also be charged with oversight of initial coin offerings.

Like probably a few of you, I chuckled at the thought. The marketplace did not. COIN ran 5.4% on the day. Bitcoin is trading back above $59,000 here on Friday morning as Ethereum again approaches $3,800. Perhaps the idea, in retrospect, is a good one as the Securities and Exchange Commission appears to not really want the job, and such a regulator might weed out the digital assets (90%-plus of the number of offerings, not of market cap) that truly are junk, which would funnel now-scattered or fringe alternative investment into higher-quality digital coins and maybe even some precious metals.

On Thursday, an advisory panel to the U.S. Food and Drug Administration (FDA) voted 19-0 in favor of allowing Moderna (MRNA) to provide a third dose of its COVID-19 vaccine to folks who already have been fully (two doses) vaccinated for six months and are over age 65, have underlying health conditions, or who are put at high risk through potential workplace exposure. The FDA gets the final say on approval and then the Centers for Disease Control and Prevention (CDC) provides a recommendation. Such approval is likely within a few days' time, coming off the unanimous vote by the advisory panel. Today (Friday), the same advisory panel will consider the merits of a Johnson & Johnson (JNJ) COVID-19 booster shot.

Boeing (BA) did not participate in Thursday's rally. Rather, Boeing shares surrendered 2% after The Wall Street Journal reported that the aerospace giant is now dealing with certain titanium parts manufactured for its 787 jets (already not being delivered for other problems) that are not as strong as they are supposed to be. Apparently, Boeing has received a notice from a supplier that certain parts were "improperly manufactured."

The community of sell-side analysts, with their four and five stars and their $300 price targets, had absolutely nothing to say. Crickets. (BTW, Boeing is a holding of Action Alerts PLUS.)

Alcoa (AA) reported on Thursday night and beat on both the top and bottom lines, adjusted or not. Revenues increased by 31.2%, a third consecutive quarter of 20%+ growth that had come after eight consecutive quarters of declining revenues. Net income was $337 million, a new quarterly record. Huzzah! It gets better.

Alcoa's cash balance is up to $1.45 billion. It has no substantial debt maturities until 2027. Expected cash pension funding requirements have never been lower. Oh, and with one quarter to go, Alcoa affirmed prior fiscal 2021 guidance of producing 14.1 million to 14.2 million metric tons of alumina and 2.9 million to 3 million metric tons of aluminum.

Did I mention that the company announced the initiation of a quarterly dividend of $0.10 per share as well as a new authorization for a $500 million share repurchase program? I am long this name. My target price of $54 remains unchanged until I see it trade there. I see the shares trading above $51 through the wee hours. (BTW, Alcoa is another Action Alerts PLUS holding.) 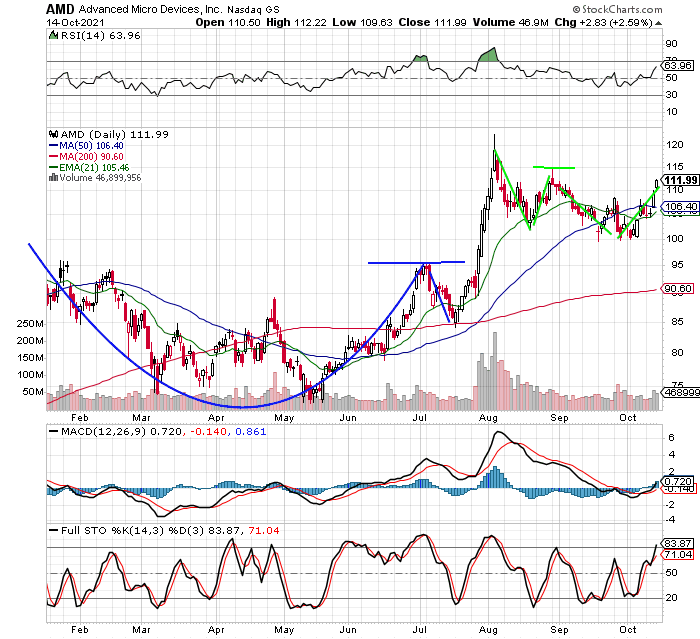 Everyone knows that I have been on the Advanced Micro Devices (AMD) bandwagon for quite some time. Everyone knows that I think Lisa Su is the coolest CEO in the territory. On this chart, I left the cup with handle pattern that I had previously shown you that had produced the last breakout that made us (hopefully) some dough.

Now, I did not spot the double bottom (in green) on my own. One of my sons pointed it out to me. I thought I saw a basing period of consolidation, but now cannot "not see" the double bottom. If this double bottom is valid, then we have a $115 pivot here that AMD is closing in on. I think we need to adjust our levels for AMD, as the pivot provided by our last pattern has provided support for this pattern, signaling its place in the past.

In addition, Thursday night five-star (at TipRanks) Goldman Sachs analyst Toshiya Hari maintained his "Conviction List Buy" rating and $127 price target on AMD, referring to the stock as his best idea in semis. Hari expects AMD to "beat and raise" when it reports on Oct. 26.