Viewers look forward to the Lightning Round segment of Mad Money each night. This is when callers get the opportunity to quiz host Jim Cramer about companies they are interested in. One caller Tuesday night asked about Roku (ROKU) . "This one is up big, so take some profits and let the rest run," Cramer replied.

We reviewed the charts of ROKU on Oct. 20 and wrote that, "ROKU is up about eight-fold from its late 2018 low around $30. With these kinds of outsized gains early buyers can become motivated sellers. Raise protection to a close below $195." Prices scored further gains into early December so a change in strategy is warranted.

In the daily Japanese candlestick chart of ROKU, below, we can see that longs can raise stop protection to $240 from a close below $195. What else should we consider? Prices are still in an uptrend above the rising 50-day moving average line. ROKU is above the rising 200-day moving average line but with prices nearly double the level of the 200-day line we can say that the shares are overbought or extended.

The On-Balance-Volume (OBV) has not made much upside progress since early October, which suggests that buyers of ROKU are not as aggressive as earlier in the advance. Trading volume has not expanded on the rally -- not a good sign. The slow stochastic indicator is showing a "triple divergence" from November into December. This relatively rare technique invented by George Lane can be an effective sell signal.

In the weekly Japanese candlestick chart of ROKU, below, we see some additional clues. The two most recent candles show upper shadows, which tell us that traders have begun to reject the highs. The weekly OBV line has moved up from March but has lagged the price action.
The Moving Average Convergence Divergence (MACD) oscillator is in a bullish alignment but it is easy to imagine that the two moving averages of the indicator could narrow from here.

In this daily Point and Figure chart of ROKU, below, we can see a potential upside price target of $366 but can also see that at $268.78 or lower will probably weaken this chart. 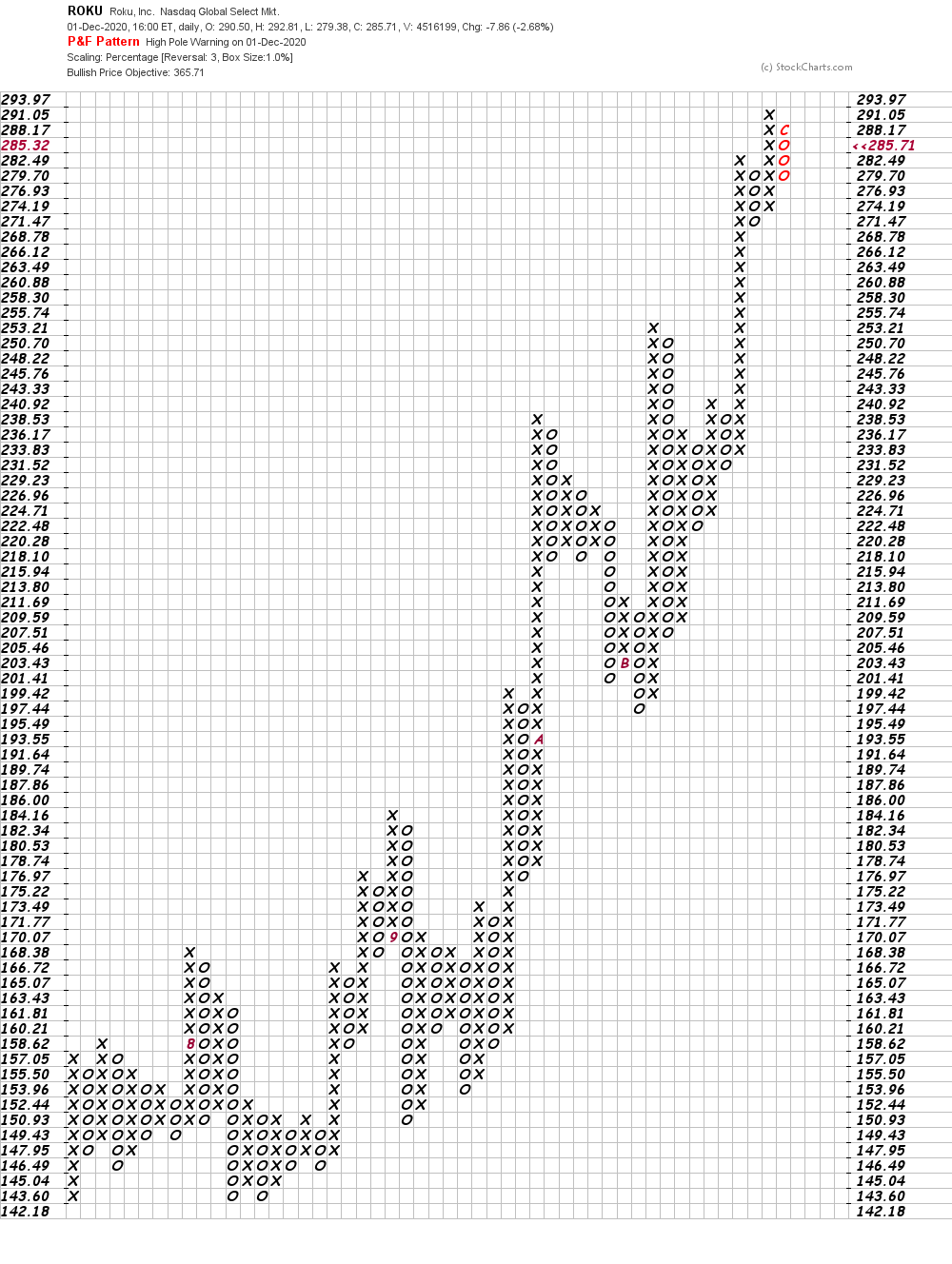 Bottom-line strategy: ROKU is up more than 100% this year so one has to have a very strong fundamental story to not consider taking some profits, in my opinion. We have some clues on the charts above to steer us to take some profits. Whatever you decide to do you should raise stops to $240 -- don't give back too much of your gains.
Get an email alert each time I write an article for Real Money. Click the "+Follow" next to my byline to this article.
TAGS: Investing | Stocks | Technical Analysis | Consumer Services | Digital Entertainment | Movies | Software & Services | Television Production/Distribution | Mad Money