Lobo said Stryker continues to see strong growth thanks in part to the 50 acquisitions it has made during the past few years. Stryker continues to benefit from an aging population, but Lobo noted that only 6% of Stryker's sales comes from emerging markets, leaving room for growth.

Let's check and see if there is some growth for the charts.

In this daily bar chart of SYK, below, we can see that prices have struggled a bit since August and did not join in the broad market rally from early October. Prices have fluctuated around the 50-day moving average and the 200-day moving average the past three months. The trading volume has been heavier than average the past three months, but the On-Balance-Volume (OBV) line has been stalled in a sideways pattern. The Moving Average Convergence Divergence (MACD) oscillator finally moved above the zero line in late December, but its subsequent movement has not been convincing.

In this weekly bar chart of SYK, below, we can see a less-than-dynamic chart and indicators. Prices have trended higher the past three years, but in the past three months prices have hugged and tested the rising 40-week moving average line. The weekly OBV line firmed to what looks like a slight new high this month but overall has been stagnant since June. The weekly MACD oscillator has been above the zero line since early 2019 but has been in a take profits sell mode for months. A possible bullish crossover could be forming now, but it depends on where prices go from here.

In this Point and Figure chart of SYK, below, we can see a potential upside price target of $260, but a trade at $222.48 is needed for a breakout and to refresh the uptrend. 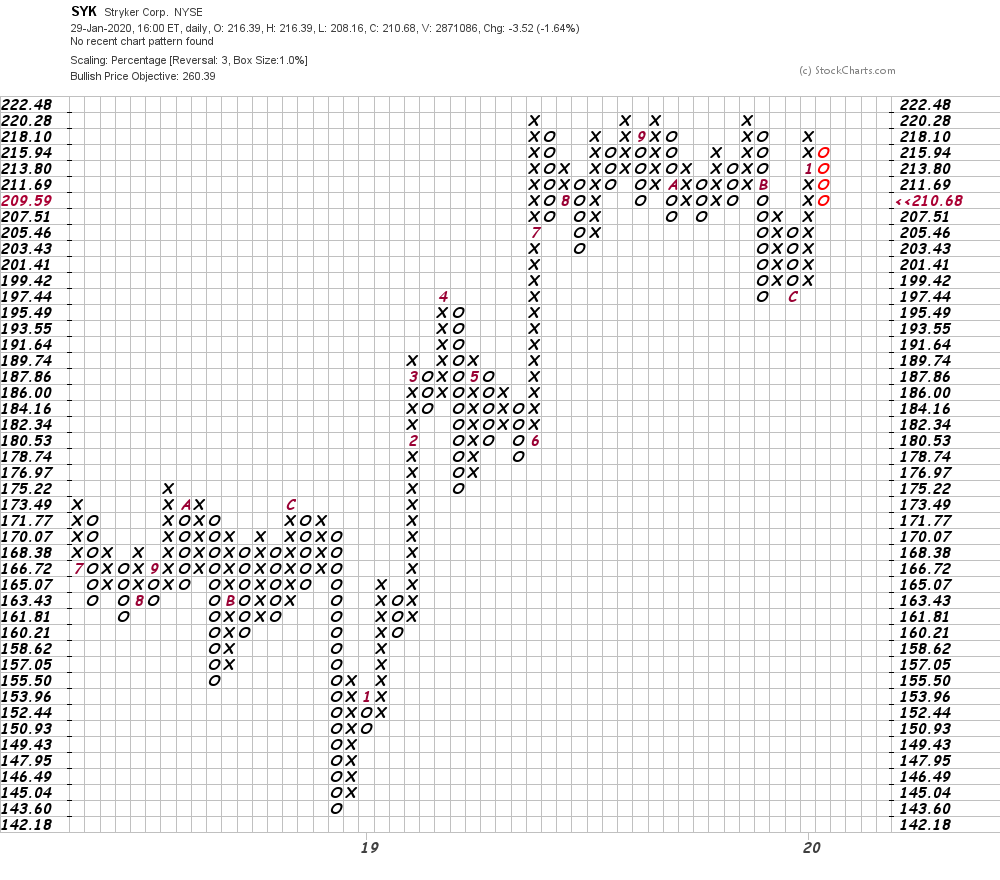 Bottom line strategy: If SYK can rally and trade at $222.48 we could see renewed strength and further gains, but the overall sense I get from the charts and indicators above is caution. The charts of SYK need to prove themselves. I would stand on the sidelines for now.