AMC Entertainment (AMC) is trading higher early Wednesday following a report that it is close to reaching a deal that would help avoid a near-term bankruptcy. The share price has suffered since early 2017 so I am skeptical that fresh financing can reverse the downtrend in a meaningful way.

In the daily bar chart of AMC, below, we can see that the shares have been in a downtrend from August and did not find buying interest or support until the $2 area in March and April. Prices made a big percentage rebound into June but failed at the underside of the declining 200-day moving average line.

The On-Balance-Volume (OBV) line rebounded sharply into early May but has since rolled over and declined, telling us that aggressive buying came and went. The Moving Average Convergence Divergence (MACD) oscillator crossed to a buy signal in early May but it has since crossed below the zero line for a new sell signal.

In the weekly bar chart of AMC, below, we can see that prices have been in a major decline the past three years. The problems with AMC did not happen overnight. The 40-week moving average line has a negative slope and has been acting as resistance on bounce.
The weekly OBV line was in a downtrend until its recent sharp rise. The MACD oscillator crossed to the upside in May for a cover shorts buy signal but a cross of the zero line seems far off at this moment.

In this daily Point and Figure chart of AMC, below, we can see a potential downside price target of $1.00. 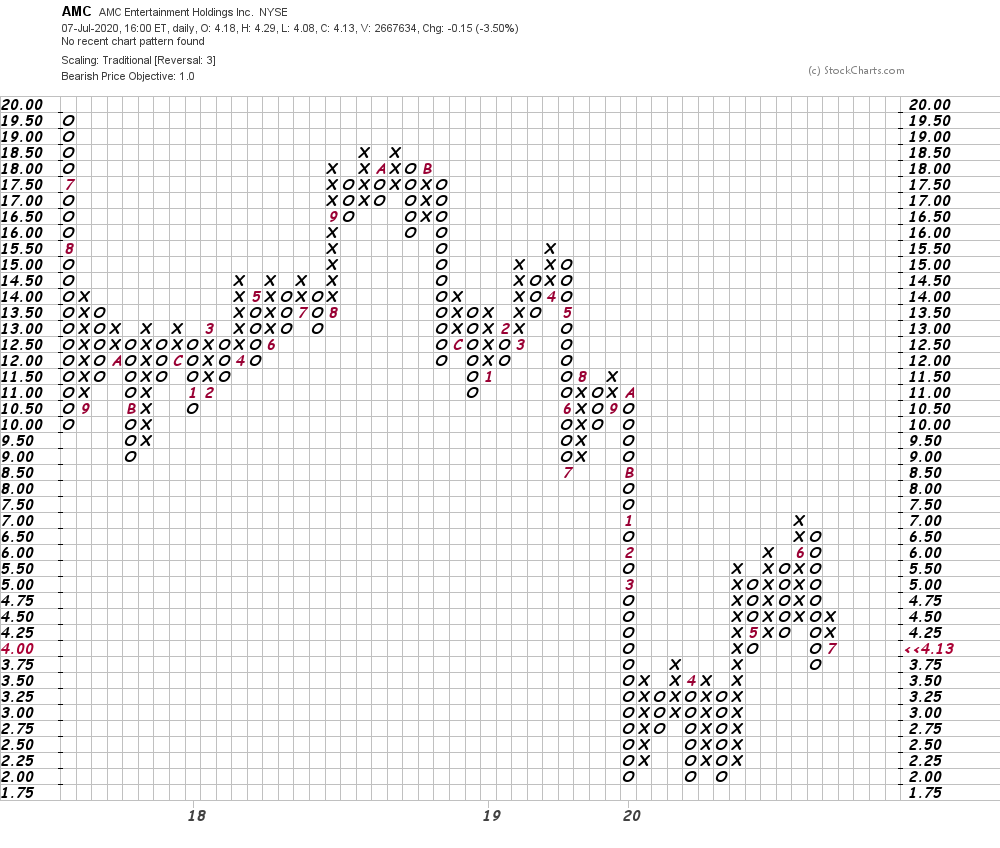 Bottom-line strategy: AMC may have been thrown a life preserver but the longer-term downtrend tells me to remain cautious. Go with sustained uptrends and not bounces in a downtrend.
Get an email alert each time I write an article for Real Money. Click the "+Follow" next to my byline to this article.
TAGS: Bankruptcy | Investing | Stocks | Technical Analysis | Movies