The ridiculous 1980s movie starring Rick Moranis about a couple of brothers and their quest for free beer? Funny, but no.

You saw Europe spike late Thursday night and take U.S. equity index futures along, I know you did. A few hours later? As if nothing even happened.

Lousy European macro? Sure. Possible reclosing of European borders due to viral spread? More like it. Here? Action at the point(s) of sale on Thursday were not exactly a model of clarity.

For several days now, the Nasdaq Composite and Nasdaq 100 have managed to trend higher despite mixing in several individual days that, if not for the lighter trading volume, would emit the scent of professional distribution. The S&P 500 appears to have rounded at peak levels, all while the Dow Jones Industrial Average has been edging lower almost on a daily basis since reaching its recent high (that came on a down day itself) about 19 days ago.

Thursday's trading session cleared up nothing. Yes, that same Nasdaq Composite posted a new all-time record. The S&P 500 and the Dow Industrials both closed green, as did the Dow Transports. Not the small-caps, though.

A winning session? Not quite. Of the 500 names that comprise our broadest equity index, 346 closed lower on Thursday than they did on Friday. Take the FAANG names -- Facebook (FB) , Amazon (AMZN) , Apple (AAPL) , Netflix (NFLX) and Alphabet (GOOGL) . Now substitute Microsoft (MSFT) for Netflix; those five names comprise more than 20% of the S&P 500. The other 495 companies account for less than 80%. You do not need to win the popular vote in order to win the election. Got it? In fact, 18 of the 30 Dow stocks closed lower as well.

Staying on theme, and staying strange, breadth was quite awful on Thursday. At the New York Stock Exchange, losers beat winners 3 to 2, while declining volume beat advancing volume by a rough 2 to 1. These are negatives. However, trading volume at the Big Board fell on Thursday from Wednesday. That's a positive on a down day, but at the headline level Thursday was an up day. Hmm.

The lay of the land only gets more confusing after hopping on the IRT at Wall Street and hopping off at Times Square, of course wearing a mask and gloves, or better yet, virtually. Losers beat winners at the Nasdaq Market Site by a rough 10 to 7, yet -- and this is some yet -- advancing volume beat declining volume quite decisively while trading volume itself increased fairly dramatically day over day. You mean to tell me that traders sold off more stocks at the Nasdaq than they bought, but also traded with much greater focus on the stocks that were moving higher? Precisely.

Even already narrow leadership is starting to thin out. Of course on such a day you might expect the Information Technology sector to lead, and it did, followed by the Communications Services sector because that's where the Internet is domiciled. Peer into that tech sector, though, and what do you see? The semis sold off, with the Philadelphia Semiconductor Index giving up nearly a full percent. Software simply roared behind a sharp rebound in Fastly (FSLY) . What is Fastly's top customer? TikTok. Does that mean that Microsoft or perhaps Oracle (ORCL) is close to a deal?

By the way, two Sarge names that we have mentioned of late contributed to this run at software/cloud names; they are Zscaler (ZS) and Datadog (DDOG) , which is now well off recent lows. I would mention Adobe ADBE as well, but I will chart that for you below. That one is heating up again.

Ever get kicked out of a bunk bed? I don't mean "kicked" figuratively. I mean by a big and angry fellow, wearing boots. That's how I felt on Thursday morning when the Department of Labor put its weekly print for Initial Jobless Claims to the tape. Surely a sign of the times, or of a pandemic not quite under control, when five months after the world ended the planet's largest economy is still seeing more than a million folks per week make new claims for benefits.

There was a positive. Sort of.

The number of unemployed in receipt of continuing jobless claims did drop by a rough 600,000 to 14.8 million. That's still 14.8million folks in need of help, plus the 1.1 million who just signed up for help. Now add in the PUA (Pandemic Unemployment Assistance) claims. This program, part of the CARES Act, is aimed at aiding the self-employed, freelancers, and contractors who don't qualify under (pre-gig economy) rules for unemployment insurance but are left jobless nonetheless. This number is released with a two-week delay, so not on the same timeline as jobless claims, but all unemployed in total now add up to a rough 28 million.

Recovery is more dependent on making progress in the fight against Covid-19 than anything else. Then, once the nation and world have made a beachhead, the pace of normalization in human interaction will be truly unpredictable. As it becomes difficult to predict just how much the world of business activity has evolved permanently over the past half year, we know there has been some significant acceleration in change due to necessity. Then there will be significant portions of the labor force that will continue to recover from the infection very slowly (months? many months?) as well as unknowable numbers who will suffer from mental illnesses such as PTSD and anxiety. These impacts will be drags on growth.

I am sure that the Fed, when it set about acting as quickly and effectively as possible in tackling the financial side of all of this, expected better and longer-term partnership on the fiscal side. There will be a fiscal compromise. When? I don't know. Maybe when people are more important than politics. Maybe when one side (or the other) is convinced that they could lose the election.

Those of you who did see that pop last night in U.S. equity index futures markets as well as this morning's higher openings across Europe know why. I mean, last night there was no baseball for New Yorkers. The Yankees played a day game and the Mets have an issue with the virus. Baseball nerd that I am, I found the Orioles and Red Sox on Sirius XM (SIRI) Radio and logged on to my overnight trading platform. (By the way, I write this Market Recon in anticipation of the KT Wiz facing off against the Hanwha Eagles in the Korean Baseball Organization. It's a solid league, the games are on Disney's (DIS) ESPN and ESPN+ early in the morning. I strongly recommend these broadcasts for fellow nerds.)

Where were we? Oh yeah. Vaccine news. Pfizer (PFE) has announced that the candidate BNT162b2 it is developing in collaboration with German biotech BioNTech (BNTX) shows a promising safety and immunogenicity profile taken from Phase One trials in the U.S. Had we not already heard this news from these firms, Sarge? No. Really.

The news that you recall was for the candidate BNT162b1. This is a second version Pfizer and BioNTech are working on that the developers feel provides a similar immune response but even higher scores for safety. Hmm. Does that mean these guys are close?

It just might. Remember this effort by these firms had already involved 30,000 volunteers for Phase 2/3 trials that began in July. Expectations are that more data will be available from these two firms working together by this October. If all proceeds according to plan, we are talking 100 million doses by year's end, and another 1.3 billion doses over the following 12 months.

The Food and Drug Administration's external vaccine advisory panel is expected to meet on or about Oct. 22. Emergency Use Authorization? Probably not, but that's a step. Just speculation right now.

No news. No firm-specific news, anyway. The name does not report again until md-September. That said, you kids watching Adobe (ADBE) ? Whoa. breakout? I think so. On Thursday the stock took the level. Friday, we find out if it holds. 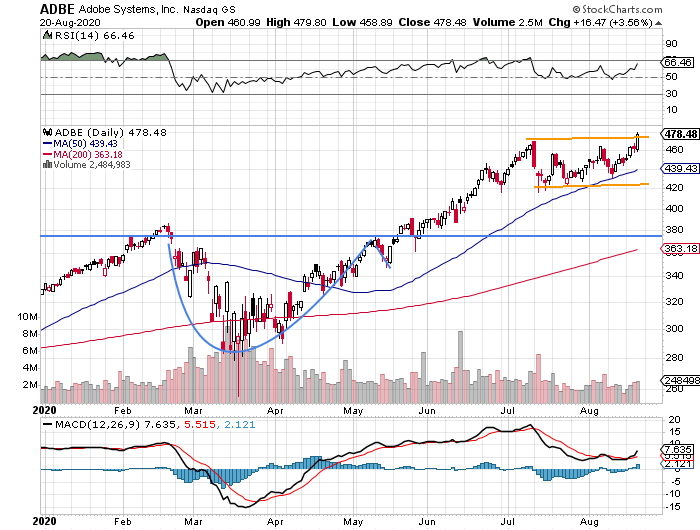 Adobe ran more than $16, or 3.5%, on Thursday. The shares had long ago completed the last breakout inspired by the cup-with-handle setup created last spring. Since early July, ADBE had been trading sideways, in a range -- what I call basing. On Thursday, the shares soared past the July 13 high. Here on Friday is the test. I would expect traders (algorithms) to take profits here. Should support be found at $470 or higher, I am taking my target price up to ... wait for it... wait.... $580. No joke. I think if we get a hold at $470, we can add 20%. That's my story, and I'm sticking to it.

Get an email alert each time I write an article for Real Money. Click the "+Follow" next to my byline to this article.
TAGS: Economic Data | Economy | Indexes | Investing | Jobs | Stocks | Semiconductors & Semiconductor Equipment | Software & Services | Technology | Real Money | Coronavirus