Was it just two days ago that everyone was celebrating Apple's (AAPL) $3 trillion dollar milestone and folks wondered when - not if - it would trade to $4 trillion? Then Wednesday comes along and now the narrative is how you simply cannot own tech. You cannot own growth. Like a lightbulb went off. Or a minor realization day.

It's true the market was overbought. It's also true that the Fed minutes might have spooked the market. My guess is if we weren't overbought, the Fed Minutes would likely have had a much milder effect on the market. As you can see on the Oscillator, it has come off on the New York Stock Exchange and more so on Nasdaq.

Breadth was terrible, or really it was in line with the decline. Shockingly it was not bad enough to halt the rise of the McClellan Summation Index. That would take another day of poor breadth.

What really was concerning to me was the rise in stocks making new lows. We already have faltering new highs so to see a rise in new lows is problematic. The 10-day moving average turned up. 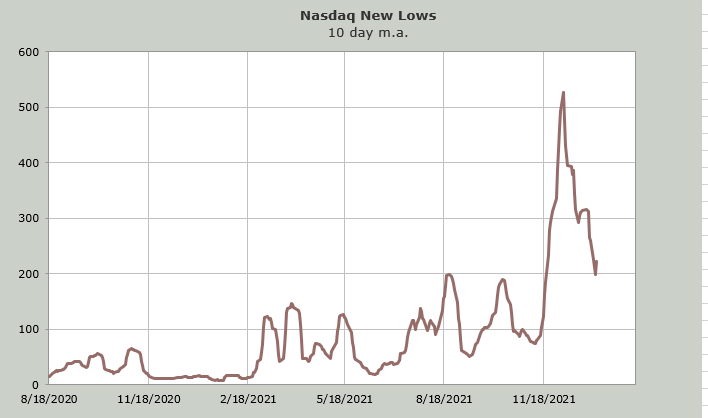 But let's talk about Nasdaq for a minute. As I noted a few weeks ago, the SOX index could be topping out based on its pattern similarity to the dollar. In addition to that on the first day of this new year, I showed a chart of the S&P relative to Nasdaq that looked like it wanted to go higher (S&P outperforming Nasdaq). And then there was Nasdaq's failure to make a higher high vs. November. In other words, this is not new, it has been going on for months.

But it is software where the carnage has been done. And sure it is likely to get worse, but we finally saw the break on Wednesday. Any rallies back to resistance are likely to be sold now.

Nasdaq itself is interesting, because it has a solid uptrend line that has been in place for nearly a year. It comes in around 14800.

With that line in mind, take a look at the number of stocks making new lows on Nasdaq. A total of 410 new lows is not good. But that late December low is with Nasdaq at 14860. The early December low is with Nasdaq at 15100. There were 710 new lows in early December. So, if Nasdaq, which is approaching those December lows, manages to break that 14800 area and have fewer new lows than 710, we'd have a short-term positive divergence -- just as everyone was pivoting away from growth. At least for a short term bounce.

Sentiment-wise the put/call ratio jumped to 1.05, so we went from complacent, when chatter was about Apple's (AAPL) valuation with the Daily Sentiment Index (DSI) for the Volatility Index at 16 to nervous in a matter of days.

Finally, I rarely write about bitcoin, but as of Wednesday evening, it has broken a decent uptrend line. The reality is that top would measure into the $20,000 area, but the DSI for bitcoin is now 18. This is relatively new category for this sentiment indicator, but it worked at the highs when the DSI got near 90. I will be very curious to see if a single digit-reading is bullish for it.