The case we have been making for the past several weeks remains: the positive chart trends are being neutralized by excessive bullish sentiment and less than attractive valuation. As such, stock selection has become more critical.

The rest declined as no other technical events of importance were generated.

As such, all remain in near-term uptrends while cumulative breadth remains positive on the NYSE, All Exchange and Nasdaq.

So, sell signals of import are still lacking at this point. 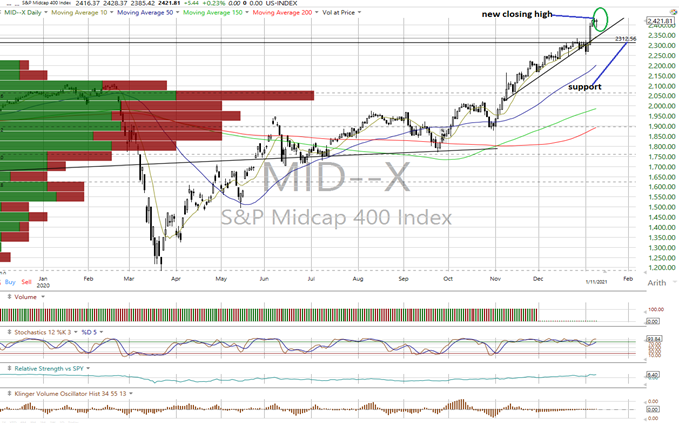 Of more significance is the psychology data now flashing caution signals in each of its components.

The Open Insider Buy/Sell Ratio dropped to a bearish 23.7 as insiders have increased their selling activity over the past few sessions.

In contrast, the leveraged ETF traders, measured by the detrended Rydex Ratio (contrarian indicator), remain very leveraged long at a bearish 1.24. We reiterate that while the Rydex/Insider action does not pinpoint tops, it has preceded important market corrections.

Additionally, this week's Investors Intelligence Bear/Bull Ratio (contrary indicator) and AAII Bear/Bull Ratio saw a rise in bullish sentiment to 16.8/64 and 23.47/47.9, respectively, leaving both on bearish signals that suggest an overabundance of bullish expectations.

Meanwhile, valuation continues to appear extended. The forward 12-month consensus earnings estimate for the S&P 500 from Bloomberg rose to $166.44 per share, leaves the S&P's forward P/E multiple at 22.8x, while the "rule of 20" finds fair value at 18.9x.

While the charts remain positive, sentiment and data continue to suggest the markets are at risk of notable downside should unwelcomed and unexpected news hit the tape. As such, we remain "neutral" in our near-term outlook as stock-picking is becoming more critical.