"The Chinese use two brush strokes to write the word 'crisis.' One brush stroke stands for danger; the other for opportunity. In a crisis, be aware of the danger--but recognize the opportunity." - John F. Kennedy

The market has been dominated in recent months about worries about surging prices, the beginning of aggressive monetary tightening by the Federal Reserve to squash inflation, and the conflict in Ukraine. These concerns have pummeled many sectors of the market including homebuilders, transportation stocks, as well as electric vehicle concerns among myriad others.

However, there are few parts of market that should prosper from these developments. While rising interest rates are not good for the housing market and an inverted yield curve is a negative for banks, it is a positive for insurers who will get higher yields from their credit portfolios. With the average 30-year mortgage rate above 5% for the first time in more than a decade, applications for new home purchases and refinancing have started to fall significantly. This will be continuing bad news for the likes of Rocket Companies (RKT) , the home of Rocket Mortgage and other housing related businesses. 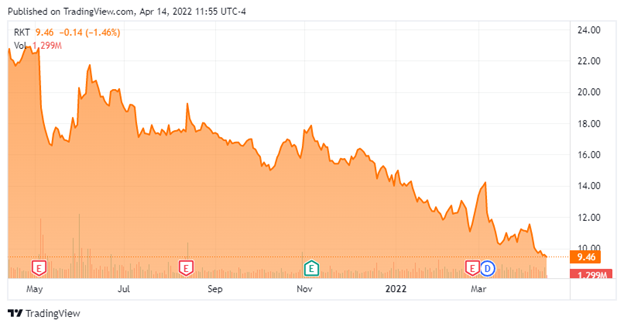 However, this is good news for firms that own mortgage servicing rights which generally run one quarter of a percent of the loan balance annually. With refinancing volume drying up like a creek in the Arizona desert in July, these rights will have longer lives and less turnover. This is a positive for names like New Residential Investment Corp (NRZ) . This REIT owns full servicing rights on $158 billion of unpaid mortgage balances and excess servicing rights on $81 billion of balances. It currently yields 9.5% and has picked up several "buy" rating reiterations from analysts over the past month.

Meanwhile, the Russia invasion of Ukraine has ramifications that might turn out to be a significant tail wind for uranium producers. Nuclear energy accounts for one fifth of electricity in this country, but 90% of uranium is imported with Russia being the third largest overall supplier. A bi-partisan bill to ban Russian uranium imports was introduced in the House late last month and Senator Barrasso of Wyoming is leading a similar charge in the Senate.

These developments should benefit names like Canadian-based Cameco Corp. (CCJ) which supplies uranium and fuel services to nuclear utilities in North America, Europe and Asia. Global X Uranium ETF (URA) is another option for investors that want diversification across the industry.

Russia is also a large exporter of carbon black, especially to Europe. This powder has reinforcing and conductive properties which are utilized across various sectors, especially tire manufacturing. This should benefit Orion Engineered Carbons S.A. (OEC) , one of the largest providers of this substance in the world. The company is domiciled in Luxembourg and Houston headquartered. It produces and supplies carbon black with 14 plants in 10 countries on three continents.

The company announced a planned price hike the day after the invasion of Ukraine that took effect April 1st. More will likely follow if Russian exports are restricted. Insiders bought just over $1 million in new shares in late February. Revenue growth should be in the mid-teens this year and stock appears cheap at less than 7.5 times forward earnings.

(Bret Jensen is a regular contributor to Real Money Pro. Click here to learn about this dynamic market information service for active traders.)

Get an email alert each time I write an article for Real Money. Click the "+Follow" next to my byline to this article.
TAGS: Mortgages | Insurance | Economy | Investing | Markets | REITs | Stocks | Trading | Housing Market | Metals & Mining