The trend is your friend. And so is seasonality (more on that later).

All of the indices closed lower Thursday as they posted minor losses following Wednesday's sizable rally. Internals were negative on the NYSE and NASDAQ as volumes declined from the previous up session.

There were no technical events of import generated on the charts, leaving all of the indices in their short-term uptrends with the one exception of the Russell 2000 (see below) staying neutral. 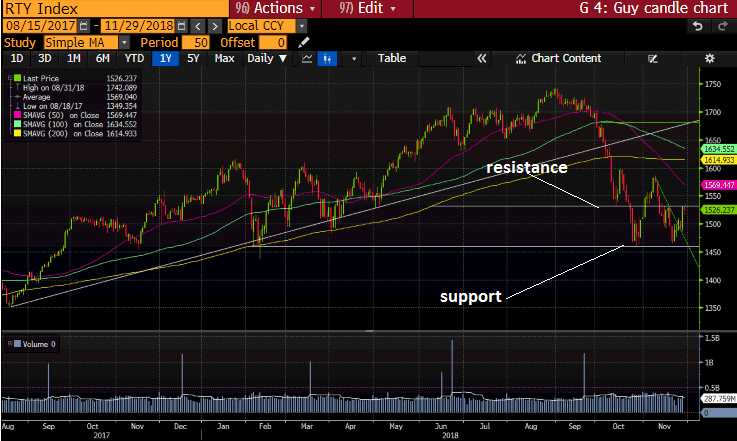 The cumulative advance/decline lines for the All Exchange, NYSE and NASDAQ remain positive but below their 50-day moving averages.

An exception is the detrended Rydex Ratio (contrary indicator), which still finds the leveraged ETF traders leveraged short at a bullish -1.15. In contrast, the Open Insider Buy/Sell Ratio (see below), while still in neutral territory, continues to find insiders primarily buyers at 104.5.

Seasonality remains encouraging as the November-to-April period coming out of a mid-term election year has seen positive returns since 1946 with a median return of 15% since 1930. Only two out of 21 periods were negative.

Valuation, assuming current estimates hold, is below fair value. The S&P 500 is trading at a forward P/E multiple of 16.0x consensus 12-month earnings estimates via Bloomberg of $170.85 per share, versus the "rule of 20" implied fair value multiple of 17.0x.

Wednesday's sizable rally on strong volume pushed all but one of the index charts into positive short-term uptrends with an improvement in overall breadth. Those issues remain intact while valuation and seasonality are encouraging. We may see more consolidation of the recent rally, but are keeping our near term "neutral/positive" outlook for the major equity indices in place.

We Can't Be Overbought And Rise Forever, Can We?

The market stalled out and pulled back, and that was the way it was supposed to work -- now let's focus on the QQQs and Nasdaq's new highs.