No violations of support were registered on the index charts during Thursday's market decline, although one major benchmark did close below its near-term uptrend line. Still, most remain in near-term uptrends.

The data has tempered its cautionary signals, yet the psychology reading is still waving a yellow flag while valuation appears extended.

All in all, we believe the importance of selectivity is going increase. 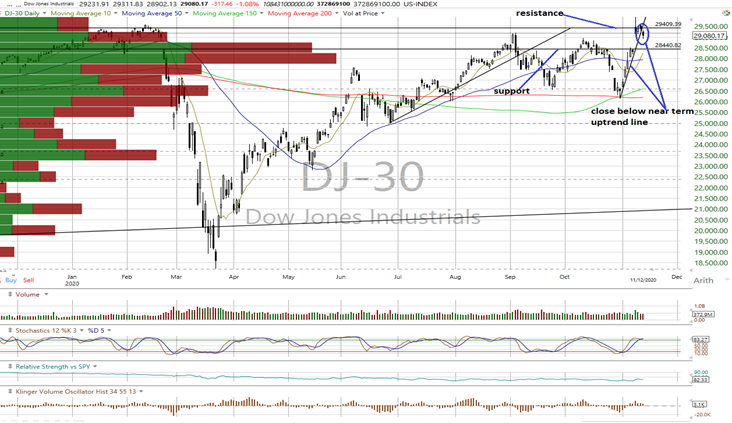 The equity indices closed lower Thursday with negative internals on the NYSE and Nasdaq. No technical events of importance were generated regarding violations of high-volume support levels.

However, the DJIA (see above) did close below its near-term uptrend line and is now neutral, joining the Nasdaq Composite in that condition. The rest remain positive.

We would note the majority of the charts have their support levels at points of high volume that, in our view, are important. We would expect them to hold. But if violated, they would suggest more caution would be appropriate.

Market breath deteriorated slightly, moving the All Exchange, NYSE and Nasdaq cumulative advance/decline lines to neutral from positive with all remaining above their 50-day moving averages.

The only indices not on bearish stochastic crossover signals are the DJIA and Value Line Arithmetic Index.

The data have slightly decreased their cautionary message.

All the one-day McClellan Overbought/Oversold Oscillators moved down to neutral from their prior bearish levels for the All Exchange, NYSE, and Nasdaq (All Exchange: +20.43 NYSE: +18.56 Nasdaq: +20.62).

However, the Open Insider Buy/Sell Ratio remains bearish at 23.1 as insiders increased their selling activity over the past few sessions.

In contrast, the Rydex Ratio, (contrarian indicator) remains bearish at 1.11 as the leveraged ETF traders remain leveraged long. As stated previously, the insider/Rydex dynamic is now going in a negative direction.

The valuation gap remains extended with the S&P 500 trading at a P/E multiple of 22.3x consensus forward 12-month earnings estimates from Bloomberg of $158.30 per share, while the "rule of 20" finds fair value at 19.1x.

While we remain near-term "neutral/positive" on the equity markets, we suspect upward participation by individual names is likely to become more selective given valuation and the psychology data.