Last Wednesday on his "Mad Money" program from San Francisco, Jim Cramer sat down with Katrina Lake, CEO of Stitch Fix Inc. (SFIX) during his "Executive Decision" segment to learn more about the company's astounding growth.

Lake said Stitch Fix now has more than three million members and is using technology and data science to solve the paradox of choice that consumers often face with apparel. With Stitch Fix, clothes are chosen and shipped right to the customer and they keep only the ones they like. She said this model has proven to be more efficient and to produce a smaller carbon footprint than traditional retail stores, which must be stocked with goods, heated, cooled and staffed.

Stitch Fix is a profitable business and Lake noted that it reinvests in innovation for its future. The retailer doesn't need to worry about downsizing stores or building omnichannel strategies, but instead can focus solely on giving its customers better choices.

When asked how to value her company, which doesn't have traditional same-store sales metrics as other retailers, Lake said revenue-per-customer is a good way to measure its success over time. Stitch Fix has seen six consecutive quarters of growth in revenue per customer. Let's check and see if this growth has made its way to the charts.

In this daily bar chart of SFIX, below, we can see a picture of a stock trading sideways the past year. Prices are currently just slightly above the flat 50-day moving average line and the slightly declining 200-day moving average line. The trading volume looks like it has increased since June and the daily On-Balance-Volume (OBV) line shows a rise from early September, telling us that buyers of SFIX have been more aggressive the past five months. The Moving Average Convergence Divergence (MACD) oscillator is on the zero line (no trend strength) but poised to turn higher to a new outright go long signal, assuming prices rally.

In this weekly bar chart of SFIX, below, we do not yet have two years of price history. We do have enough history to generate a 40-week moving average line, which currently has a slightly lower slope. The overall pattern of price action has been sideways around the $25 area since late 2018. Strength above the low $30s is needed to turn the trend positive. The weekly OBV line has been rising since December 2018 and could be foreshadowing higher prices in the weeks and months ahead. The weekly MACD oscillator is just now crossing the zero line for an outright go long signal.

In this Point and Figure chart of SFIX, below, we can see a relatively nearby price target of $27 projected. 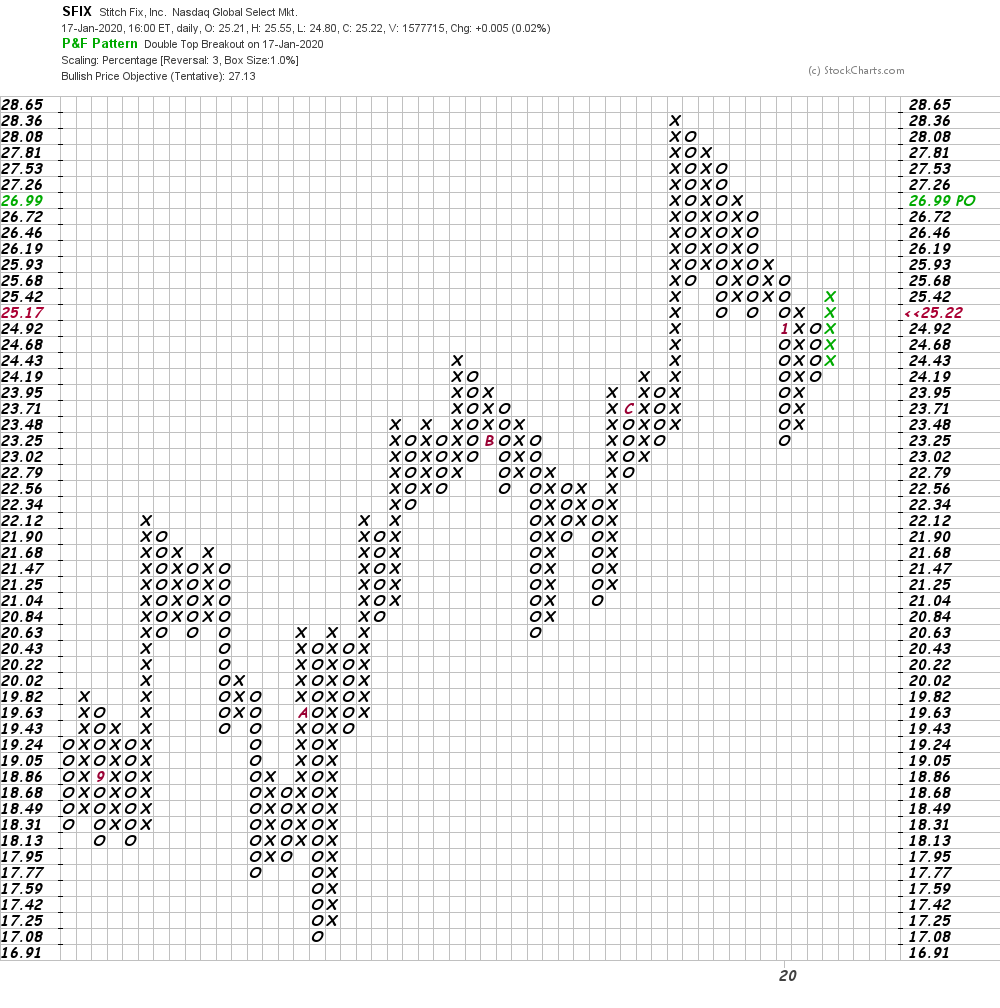 Bottom line strategy: The charts and indicators of SFIX look constructive at this juncture. Not a big bullish story, but constructive enough to approach the stock from the long side.

Get an email alert each time I write an article for Real Money. Click the "+Follow" next to my byline to this article.
TAGS: Investing | Stocks | Technical Analysis | Apparel | Consumer | Retail | E-Commerce | Mad Money | Executive Interview | Real Money