Tuesday, I discussed "bottoming" versus "a bottom." Stitch Fix has all the characteristics of a bottom in play.

The stock is trading well off its pre-market lows and bearish open. Despite the weak action, we are seeing a higher low in the StochRSI (bullish divergence) and another potential bullish divergence with the Full Stochastics.

Price is holding support from early 2019 and setting up for a higher low than what we experienced around Christmas 2018. That bounce retraced half the drop from fall 2018. If we were to repeat that action, then Stitch Fix would bounce to $25 over the next three to six months.

Unfortunately, it's not as easy as waving a magic wand to get fitted for a move to $25. While we don't have a ton of post-earnings history to go off of in terms of negative action on the day after the report, we can examine the four times it has happened since Stitch Fix came public. 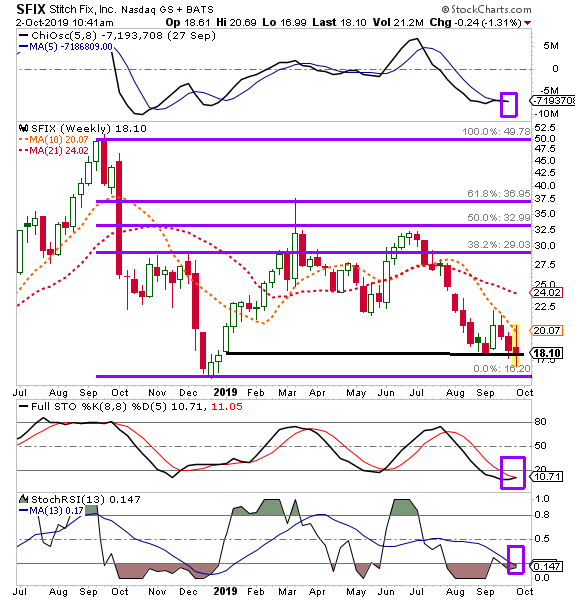 After the end of day one, three weeks later, the stock moved by double-digits every time with a tight range of 10% to 14%. Three of the four times, the stock continued lower with a single reversal back in December 2017. Fast forward to five weeks post-earnings and we find the stock virtually unchanged from where it closed after reporting earnings.

In other words, it traded lower on the first day after earnings and was trading at the same price five weeks later. Again, this is a small sample size, but a good reason not to over-commit long.

It's fair to say analysts weren't impressed by Tuesday's earnings release. Stitch Fix reported fiscal fourth-quarter earnings of $0.07 per share on $432.1 million in revenue. Active clients climbed 18% to 3.2 million. The EPS number landed three pennies ahead of expectations while revenue came up a rounding error shy of consensus.

The hit on the stock appears the result of adjusted EBITDA coming in below consensus estimates despite being in-line with guidance from management. Management projects full-year fiscal 2020 revenue in the range of 23% to 25% compared to the 29% growth experienced in FY 2019. These numbers resulted in six analysts lowering their price targets, with new ranges of $20 to $38.

Women's and Men's business drives the core of Stitch Fix with the Direct Buy Business now driving growth. The wild card lies in the Kid's offering and U.K. business.

Management has discussed the slightly fickle nature of kid's clothing, but there's absolutely demand waiting to be captured. On the U.K. side, it is all about training and designers as stylists in the United States aren't going to simply slide in across the pond. The company should start seeing dividends in the second half of FY 2020 for both of these.

There's enough potential that analysts don't seem to be considering, especially when we see so little out of bricks-and-mortar retail. If Stitch Fix closes below $16, then I'm wrong and take my loss, but I believe the downside is capped at $2 with an upside of at least twice that level, which is why I'm a buyer around $18.

Get an email alert each time I write an article for Real Money. Click the "+Follow" next to my byline to this article.
TAGS: Earnings | Investing | Markets | Stocks | Technical Analysis | Trading | Stock of the Day