Ever hit the gas, only to move a few feet into an intersection just to find that your vehicle was not going to make it across the street? On Monday, equity markets opened higher in response to President Trump's extension of this coming weekend's deadline for reaching a trade deal with China. A failure to either extend that deadline, or reach an agreement would have triggered an increase in U.S. tariffs on Chinese imports -- something most unwelcome on not only both sides of the Pacific, but globally.

The stock market played the game according to plan. Not quite a "sell the news" event, the S&P 500 did hit resistance almost precisely where resistance had also been enforced in both October and November. We had anticipated a stalling at that level for weeks in this column. That very spot had also acted as support over last summer, as well as resistance a full year ago. Enough said, the level is written into the algorithms that rule the point of sale for the quants that now run the marketplace itself.

The president will now focus on North Korea, so there will not likely be any release of market moving news from that quarter. This "stalling" is not true cause for worry in my opinion, as markets do need to wiggle a bit, we need to meander, we even need days of far greater distribution that what we saw on a Monday that experienced a late test of the Friday highs.

The Russell 2000, up 18% year to date, even closed the Monday session in the red. Was the Monday afternoon, really an algorithmic reaction to technical resistance? Maybe this was simply the months-long correlation between oil and equities that does not fully make sense re-exerting itself. Hmm, even though an improvement in the global trade condition would also improve table setting conditions for global economic growth. Oh, don't forget.. the Fed Chair will testify before the Senate Banking Committee this morning, so there is one more avenue of attack to defend oneself against this day.

Seems like just yesterday that I wrote about $57 support for WTI Crude. In fact it was just yesterday. Energy markets were then rocked by a "surprise" tweet from the president... that is if tweets posted by the president can still be categorized as a surprise in any realistic way.

President Trump urged OPEC to "relax and take it easy", in reference to the somewhat recently agreed-to production cuts implemented across OPEC as well as non-OPEC oil producer Russia. The tweet did bring something of a wry smile to my face at the time. I really just do not know why it would be in OPEC's best interest to "relax" at this time.

While there is potential for a near-term shortage like condition, now that OPEC can boast 83% compliance, now that Venezuela, and Iran are diminished as contributors, and now that U.S. Shale producers seem to be prepared to take a more disciplined approach, and perhaps make a real effort at residing within existing cash flows.

Long-term? That's a different story. Demand growth likely will still be there -- perhaps for decades. Under-developed economies will not turn their collective backs on fossil fuels, I think that's common sense. Still, the EIA sees U.S. output rising to 13.2M bpd by 2020. That would easily make the U.S. the planet's largest producer, and over time might just more than soak up the global growth in demand.

This will eventually put OPEC and Russia in a position of raising revenue at disadvantageous pricing. Don't forget that though the U.S. has driven the Shale boom, that rocks exist globally. Other folks can do this. The potential is there, that should technological advances reach a point that drive break-even points to significantly lower levels than currently anticipated, that over-supply becomes a possibility.

This is why I think that the larger, better-funded firms within the exploration space remain (at least for me) the right way to play energy, not only for this coming potential for short-term constriction on the supply side, but even for the medium to long-term potential for over-supply. My only other thought as we proceed is to stay away from under-capitalized, over-indebted shale producers that face this already mentioned pressure to limit capital expenditures based on not just cash flow, but also by what they can return to shareholders. The larger firms can both spend and reward shareholders.

Where am I, in this space? I remain long Exxon Mobil (XOM) . I remain long Royal Dutch Shell (RDS.A) . While I was on vacation, I allowed myself to be called away on both my British Petroleum (BP) , and Chevron (CVX) longs. I fully intend to rebuild both of those positions. Now, it's just a matter of how much of a discount I try to take on re-entry.

Planet Fitness (PLNT) , the affordable gym targeting everyday people as clientele, will report the firm's fourth-quarter results after the closing bell Tuesday afternoon. This, for my portfolio, has been a slow and steady winner, far less volatile throughout the latter parts of 2018 than equity market performance had broadly been.

What this firm has done most successfully is increase revenue, despite local franchisees charging gym goers just $10 a month. What that did, in effect, besides disrupt the wellness industry, was simply drive entire neighborhoods full of folks who think that maybe they'll go workout sometime... to go sign up for a membership. The price was low enough to drive growth in scale, while also being low enough for many folks who never make it to the gym to simply maintain their memberships just in case.

The shares have been unusually volatile, however, ahead of these earnings in response to positive comments made last week by Jefferies. Wall Street is looking for EPS of $0.32 on revenue of $174 million. These numbers, if realized, would paint a picture of 33% earnings growth on 30% revenue growth. 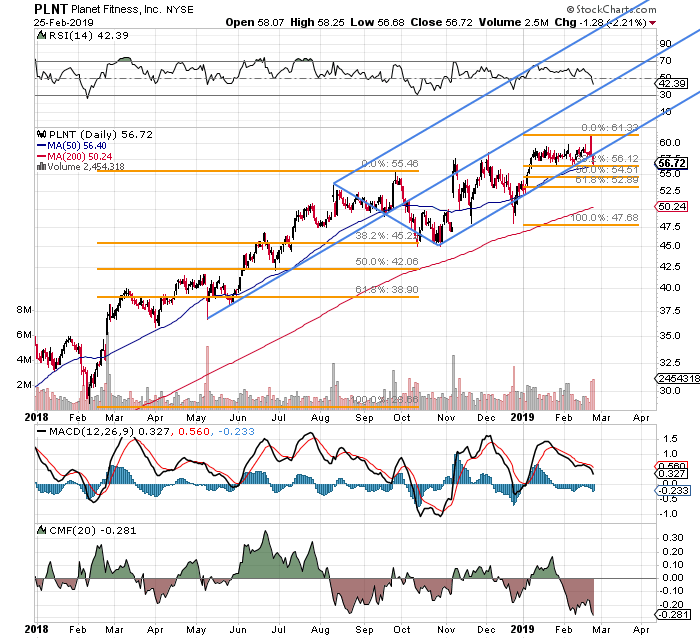 I want you to see these warning signs. Money Flow has been soft for a month. The last sale for these shares has broken below the lower trend line of our Pitchfork model, and will pressure the 50-day Simple Moving Average (now $56.40) going into the digits. Both Relative Strength and the daily Moving Average Convergence Divergence signal short-term bearishness.

My thought on the name? My net cost basis is very low -- in the $40s. The problem is that because the name got away from me, I only have a holding of roughly 20% of what I had intended originally to invest. I would love to beef up the position, but only if I can do so intelligently. I don't relish the thought of violating basis. That said, I don't really love a much smaller than intended holding, either.

Get an email alert each time I write an article for Real Money. Click the "+Follow" next to my byline to this article.
TAGS: Investing | Oil | Stocks | Energy | Oil Equipment/Services