They will be out in force. In fact, they already are. I would, however, be slow to jump on this bandwagon. The facts are...

... that the central bank has taken recent steps to further tighten monetary conditions that were received poorly by financial markets.

... that not just market professionals, but strategists at at least one high-profile bank have openly questioned liquidity levels.

... that the slope of the yield curve remains dangerously flat.

... that equity markets have ventured, by several measures, and with breakneck speed, into a bear market.

... that many pros see a dangerous bubble in the size and scope of corporate debt.

... that the federal government had gone into a state of partial shutdown as the weekend began.

There was an attempt made over the weekend to make Treasury Secretary Steve Mnuchin look foolish for holding calls with the heads of the six largest U.S. banks to check on general conditions of liquidity. Sensationalism? Quite honestly, I think we should at least be glad that the man appears to trying to do his job.

Can one imagine under all of these negative conditions, a responsible leader not making such calls? Could we even imagine the public outcry if something glaringly significant were amiss, and the Treasury Secretary appeared to be asleep at the switch?

Rattled that SecTreas is trying to stay ahead of the curve? No. Is there a Mnuchin put? No, I don't think so. Nice to see somebody besides us thinks something might be wrong, though.

The Fed now appears to me, to be if not in the "policy error" zone than very close to it. Perhaps the Secretary sees this as well.

Making these calls, and in addition the planned calls today to the President's Working Group on Financial Markets seems nothing but prudent. Assuring that not just markets, but key government functions are operating normally during this partial shutdown seems like common sense.

On top of this all, there was simply no negative initial reaction visible in equity index futures trading overnight. The Mnuchin calls do not seem to be a surface issue.

Are there underlying problems? Well, no kidding. Is there a single fool in our ranks who thinks all things are grand this morning? No one who reads a newspaper, or watches the news needs to be told that financial markets as well as both the global and domestic economies face significant, persistent challenges, to their immediate front.There's a reason somebody walks point.

How odd does it feel to defend Fed Chair Jerome Powell? Reports circulated late last week that the president had discussed the removal of Powell from his post. The Treasury Secretary also had this on his plate over the weekend, as Mnuchin made clear that President Trump did not feel that he had the legal right to do so.

I will tell you this. Even as I have been critical in recent days of this FOMC, and its leadership, given the now constant state of volatility in Washington, one could only see even the thought of something like this as a mistake.

I do not see criticism of monetary policy as a threat to the central bank's independence. Every single president, with the exception of President Obama, due to the fact that the Fed's policy remained beyond ultra-loose for his entire eight-year term, had complained (perhaps more quietly) on this subject matter.

This understood, the removal of a president's own appointee due to disagreement over policy, and replacement with anyone else, would certainly put the incoming leader under a cloud of perceived dependency that would be almost impossible to lift.

The Most Wonderful Time

Tis the season, and as the season meanders to conclusion, a bevy of statistics measuring that season's success start rolling in. According to Adobe (ADBE) Analytics, $110.6 billion has been spent via the internet from Nov. 1 through last Wednesday. That's a new record.

From the same source, online holiday shopping popped to the tune of 26% year-over-year growth. The Wall Street Journal reports that according to Mastercard (MA) , in-store type purchases were also hot. Once perceived as headed toward a dead end, bricks-and-mortar sales grew 4.3% year over year from 2017.

My thoughts on this are simple, and two-fold. This should be seen as a short-term positive for the group, and especially for the dominant player in e-commerce, which is obviously Amazon (AMZN) . Markets may benefit from seasonal factors this week, that will extend perhaps through next week.

This, however, is the part of the season where the talk turns from retail sales, in general, to discounted inventories that pressure margins, as well costly pressures on last minute deliveries.

On top of that, many consumers, tired of living in an endless state of frugality, finally got that raise this year, or maybe they were finally moved to full-time status by their employers. These same consumers who maybe don't focus on financial markets for a living are likely to see their quarterly brokerage statements, and their quarterly or annual retirement account statements are likely to come in significantly lighter than they had expected in January. This, while the season's credit card bills come flying in, and those residing in blue states who start working on their tax returns early realize that the tax cuts are for them ... a net tax increase.

Those investors who failed to make a timely exit, may want to consider short-term pops across the retailing or delivery services type firms, such as FedEx F (DX) , or United Parcel Service (UPS) for either a reduction, or an exit.

One of my better trades of this past year was Planet Fitness (PLNT) . Having taken my profits off the table for this name months ago, and then forced into a position of having to defend my book throughout the fourth quarter equity fire sale, this non-dividend payer sort of fell off my radar, until I noticed one thing.

PLNT had indeed been volatile, but has in no way taken the beating that everything else has. For those not in the know, Planet Fitness has been a pioneer in a different kind of gym. The chain focuses on regular folks just trying to get back in, or stay in shape, and they do it at a discount. No frills, huge scale.

As the holiday season comes to a conclusion, folks are going to get off the couch, and after they see their financial statements, they are not going to want to spend a lot to do it. This stock might just be set up to resume its outperformance after a recent swoon. 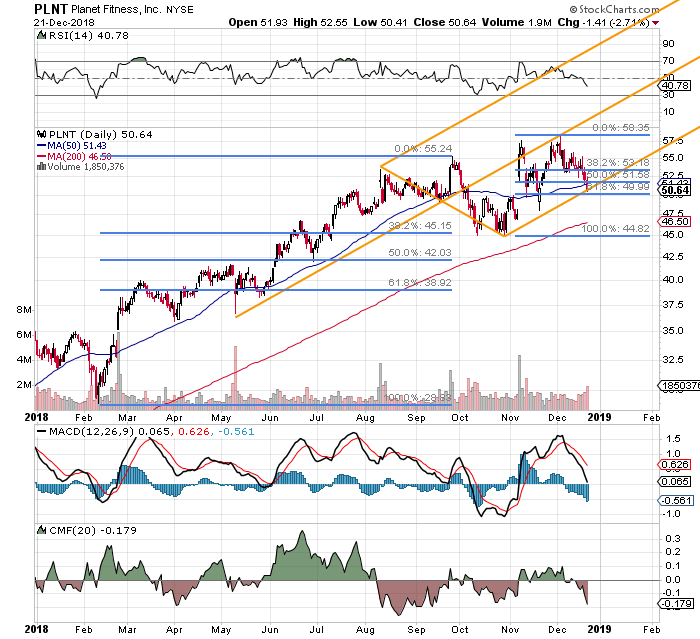 The stock is in a state of weakness for the first time in weeks. Relative Strength has turned lower, while both the daily Moving Average Convergence Divergence (MACD), and Money Flow have suddenly made sharply negative moves. Currently, PLNT trades at an almost precise 61.8% re-tracement of its early November earnings-related rally, and at the lower trend line of the still intact Pitchfork model.

The company will report its fiscal fourth quarter results sometime in February. Planet Fitness does appear somewhat expensive trading at 35 times forward-looking earnings. Yes, that is a bit dangerous. Then again, this is a growth stock, with no impact or exposure to trade conditions. Nearly all of the chain's 1,600 locations are domestically operated, just a few international outlets scattered around the Western hemisphere, meaning that revenues are not greatly exposed to currency risk.

Total debt looks a little high when compared to cash and equivalents, but comes to much less than total assets, and cash seems to be growing rapidly at that. Operating and levered cash flows are positive, Both current and quick ratios appear more than fine. Should support at current levels fail, the chart, and history both suggest the $45 level as a catch-point. Understand that mining a market in a state of confirmed correction for longs is risky business before we move on.

Note: The sale of the earnings-related options "strangle' will produce an aggregate credit of $2.69, reducing the trader's net basis to $47.95. Should the shares rise above $55 by expiration, the trader is committed to the sale, and will be forced to take a 14.7% profit.

Should the shares drop below $45 by expiration, this trader will be committed to purchase a second lot of 100 shares at that strike price, leaving the trader long 200 shares at a net basis of $46.48.

There are no significant domestic macro-economic events scheduled for Monday, Dec. 24.

Get an email alert each time I write an article for Real Money. Click the "+Follow" next to my byline to this article.
TAGS: Economic Data | Economy | Federal Reserve | Funds | Futures | Indexes | Investing | Markets | Stocks | Technical Analysis | Trading | U.S. Equity