United Technologies Corp. (UTX) and Raytheon Co. (RTN) shares both are higher on word of the planned combination of Raytheon and United Technologies' aerospace business through the formation of a new company, Raytheon Technologies. I find that all-stock deals can be pretty fluid and a challenge for a simple technical analyst such as myself to handle, though the Street seemingly likes the marriage. Let's look at the charts of UTX to see if they reveal anything interesting.

In this daily bar chart of UTX, below, we can see that UTX made a steep decline from September to December and then rallied all the way back to the September zenith by early May -- pretty impressive. Prices crossed above and below the 200-day moving average line several times since October, but they are currently above this long-term indicator of trend. UTX is below the cresting 50-day line but could close above it here on Monday.

The trading volume looks like it has declined from January to June but the On-Balance-Volume (OBV) line shows a rise to early May, suggesting more aggressive buying. The OBV line has improved but is well below its October peak. The Moving Average Convergence Divergence (MACD) oscillator crossed to the upside from below the zero line for a recent cover-shorts buy signal.

In this weekly bar chart of UTX, below, we can see a strong rally from $95 to near $145 and then a decline back to $100 before another rally. Not for the faint of heart. UTX is above the 40-week moving average line but it has a recent negative slope. The weekly OBV line is stronger and more bullish than the daily line. The weekly MACD oscillator was poised for a take-profits sell signal as of Friday.

In this Point and Figure chart of UTX, below, the software projected a downside price target as of Friday. A trade at $145.04 will be a bullish breakout. 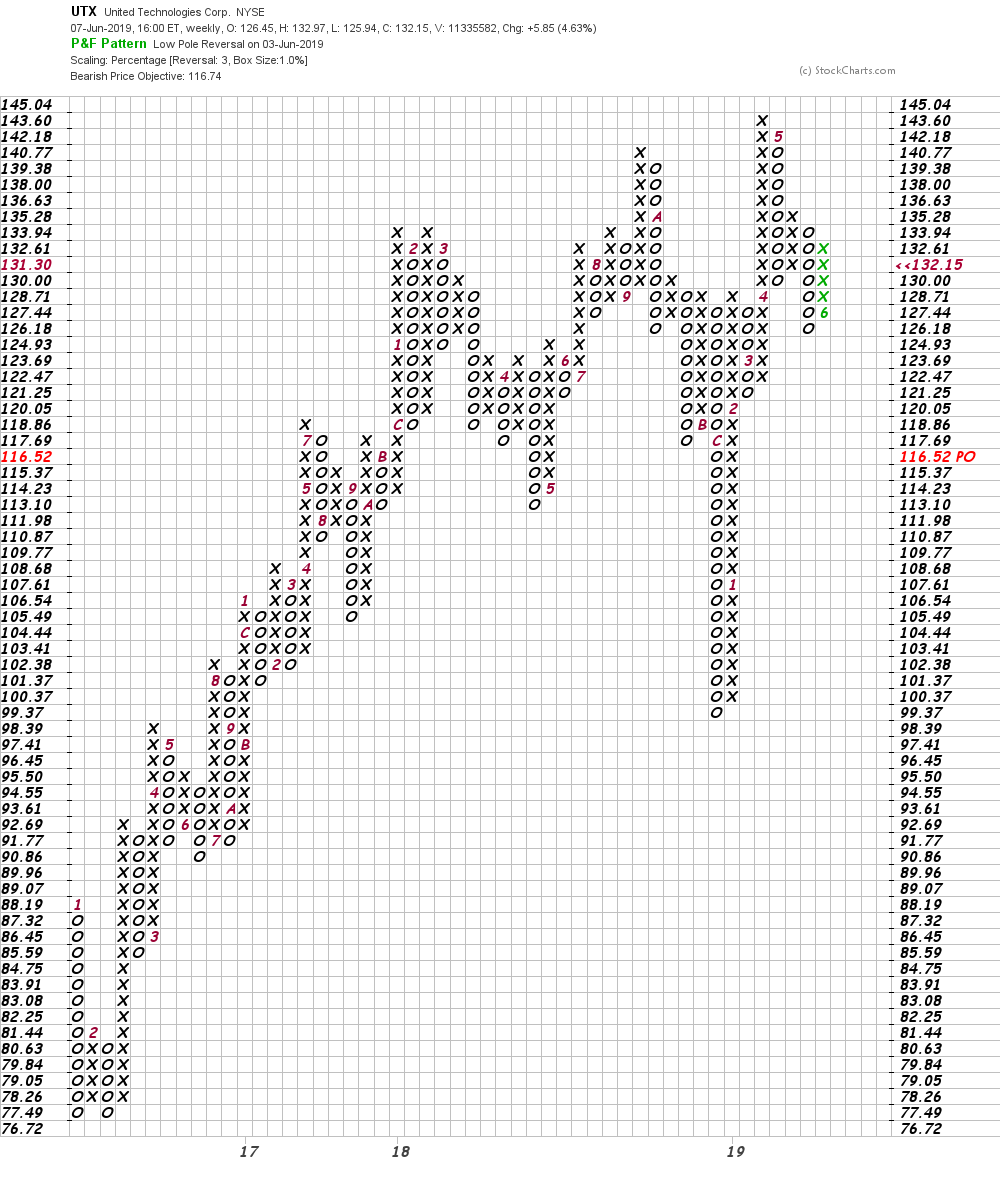 Bottom line strategy: If you are long UTX I would hold with a stop below $125.

Get an email alert each time I write an article for Real Money. Click the "+Follow" next to my byline to this article.
TAGS: Mergers and Acquisitions | Investing | Stocks | Technical Analysis | Aerospace | Defense | Real Money | Stock of the Day

We answer questions on UPS, Lockheed Martin and Nvidia.

Restaurant Brands International, the company behind Burger King, Tim Horton's and Popeyes, sets up as a value buy as it falters after earnings.

This serves the purpose of letting stocks rest before they embark on the next step in their journey.