The stock has risen over 3% in premarket action after its December-quarter results, which reported earnings of $0.75 per share, topping the consensus forecast by $0.10 and rising 15.4% from the same period last year, and a 9.2% rise in revenues to $6.63 billion, also above forecasts.

The Seattle-based beverage giant also boosted its full-year earnings guidance to a range of $2.68 to $2.73 per share from $2.61 to $2.66 and said it sees global comparable store sales growth of between 3% and 4%.

"Our streamlined efforts over the past six quarters are paying off by allowing us to bring more focused and discipline to our three strategic priorities of accelerated growth and our targeted markets of U.S. and China, expanding global reach of the Starbucks brand, leveraging the global coffee alliance with Nestlé (NSRGY) and increasing shareholder returns," CEO Kevin Johnson said highlighting the keys to the earnings success.

Johnson added that the efforts in digital and rewards offers were key drivers of same-store sales in North America, aided by a stronger consumer more apt to spend on the company's comparatively expensive coffee.

"Starbucks has been a pioneer among retail and restaurant companies in navigating changes in consumer behavior caused by demographic shifts and technology disruptions," Stifel analyst Chris O'Cull said. "The company has reinvested in core equities, expanded usage through new products, and integrated e-commerce into its global store network, all of which have contributed to positive consumer sentiment and greater spend per visit."

The company's partnership with Uber Eats, for example, is already expanding and hints at the company's quick shift as consumer behavior moves toward convenience-first purchasing.

Still, O'Cull maintained a "Hold" rating on the stock, reflecting the company's inability to drive up margins amid the culture shift. He set a $65 price target, indicating he views the shares as appropriately priced at current levels.

One big positive for Starbucks was its better-than-expected performance in China.

The region remained a significant question mark ahead of earnings as concerns on the trade war and potentially patriotic purchasing patterns among Chinese consumers. Surprising forecasts, same-store sales in the region ticked 1% higher in the quarter.

"China represents a large opportunity and a dynamic market," Johnson said. "The bigger story in China is total transactions driven by our store growth which underpins approximately 80% of our growth algorithm in China. This quarter our store base in China grew by 18%, comp stabilized at 1%, and we remained confident in the future opportunity."

"Starbucks Delivers is already contributing mid-single digit transaction mix in our key markets of Beijing and Shanghai which validates customer demand and reinforces the significant runway of opportunity ahead," he explained. "Along with the recent upgrade of our Starbucks Rewards program, new food and beverage offerings and powerful new store economics, we remain bullish on our path in China and the growth that lies ahead, we are playing the long game in China."

Despite the bullish calls, analysts were skeptical on the prospects given the consistent macro pressures lingering on the company's biggest growth engine. 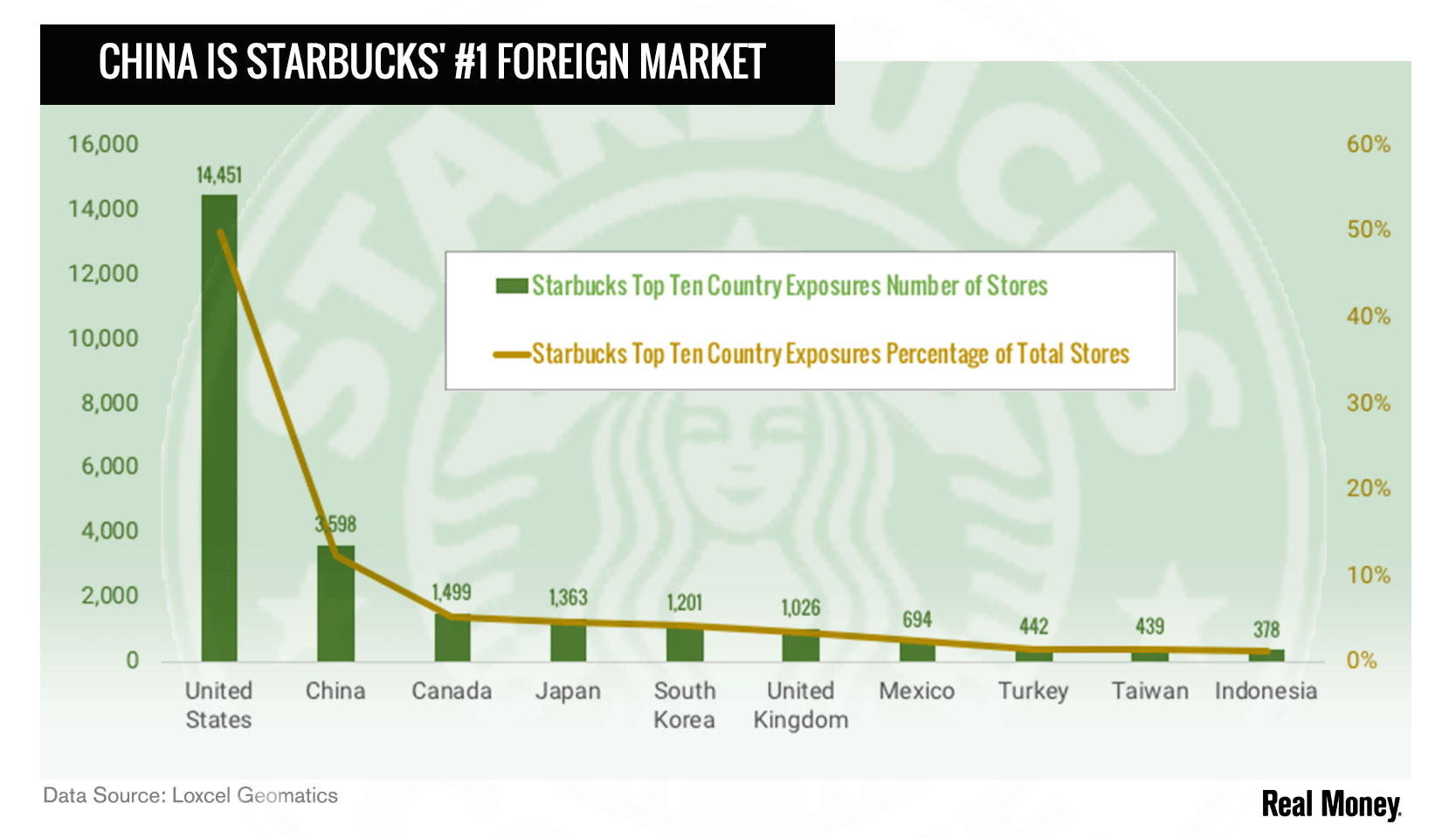 The company also needs to contend with significant competition from both domestic and fellow international coffee purveyors aiming at the burgeoning market.

Most notably, Coca-Cola's (KO) Costa Coffee acquisition aims to expand into the market and chip away at Starbucks' dominant 60% market share in the nation and domestic upstart and deep discounter Luckin Coffee.

So, while the company is counting on this growth engine, the trajectory is far from certain.

Nonetheless, the market reaction after the positive numbers on earnings is suggesting many feel confident in the growth engine.

Get an email alert each time I write an article for Real Money. Click the "+Follow" next to my byline to this article.
TAGS: Investing | Stocks | Consumer | Food & Drink | Restaurants | China | U.S. Equity | Stock of the Day