For his first Executive Decision segment of "Mad Money" Wednesday, host Jim Cramer spoke with Kevin Johnson, president and CEO of Starbucks Corp. (SBUX) , the coffee chain that is celebrating its 50th anniversary later this year.

We are 58 days into the coronavirus outbreak in China, Johnson said, and it appears the worst is now behind them and they've learned valuable lessons that Starbucks is applying to its stores. With increased cleaning and sanitizing and moving to a take-out system, Starbucks has been able to help curb the spread of the coronavirus.

Johnson said sales are recovering in China and Starbucks continues to reopen stores daily. Their balance sheet is strong and the company will continue to pay out its dividend and buy back more of its shares.

Let's see if this positive corporate spin has reached the stock price of Starbucks, which is a holding of Cramer's Action Alerts PLUS charitable trust.

In this daily Japanese candlestick chart of SBUX, below, we can see over the course of several months that prices have been cut in half, from around $100 to just touching $50. SBUX is well below the declining 50-day moving average line and the declining 200-day moving average line. We can also see a bearish death cross of these two lagging indicators.

The On-Balance-Volume (OBV) line looks like it began its decline in the middle of January and is still pointed lower. The trend-following Moving Average Convergence Divergence (MACD) oscillator is in a bearish configuration well below the zero line. Wednesday's candle pattern (admittedly hard to see) shows what could be a bullish hammer pattern. It has the right location and shape, but we also need to see bullish confirmation in the session here on Thursday. This could mark a low and hopefully a new base can form.

In this weekly candlestick chart of SBUX, below, we can see that prices gave up all the gains from the low in 2018. The slope of the 40-week moving average line is negative. The weekly OBV line shows a peak back in August, which tells me that some investors were sellers of SBUX well before the virus. The weekly MACD oscillator is bearish.

In this daily Point and Figure chart of SBUX, below. we can see that prices met and exceeded a downside price target of $62. 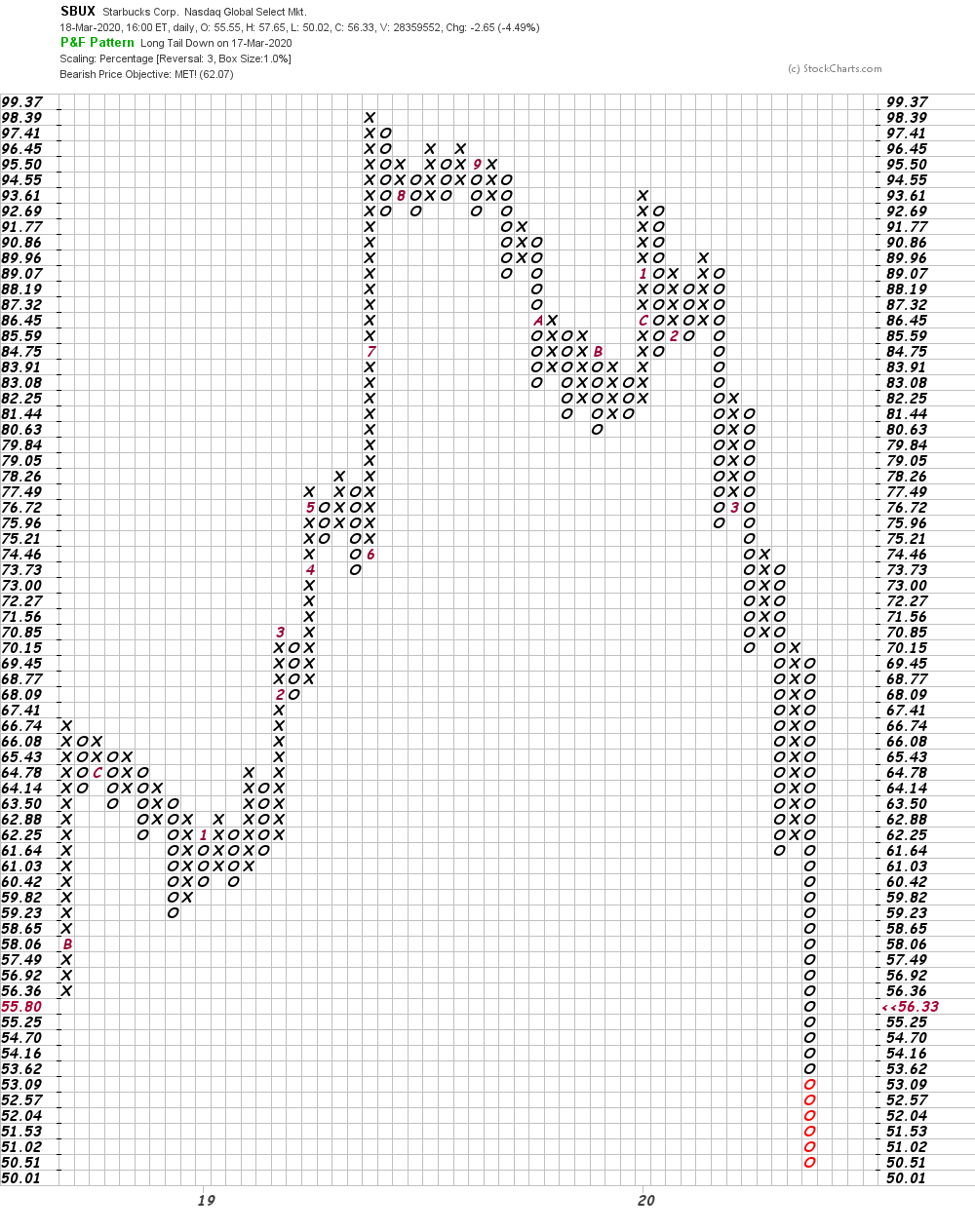 Bottom line strategy: In another life I interviewed Howard Schultz a number of times when I was a reporter for Reuters. Every public appearance is highly rehearsed and practiced to give a positive spin. I suspect the same happens with the current CEO. Investors may want to see fresh buying of Starbucks' stock and more technical signals that a bottom is in and retested. That said, I would suggest that SBUX has made a big enough correction to consider the long side.

Get an email alert each time I write an article for Real Money. Click the "+Follow" next to my byline to this article.
TAGS: Investing | Stocks | Technical Analysis | Consumer | Food & Drink | Restaurants | China | Mad Money | Executive Interview | Real Money