Jim Cramer's charitable trust, Action Alerts PLUS, is trimming their Starbucks (SBUX) position, so another look at the SBUX charts is in order.

When we looked at SBUX on Dec. 10 I wrote that, "I prefer to grind and brew my own single origin coffee at home but obviously many, many more people prefer Starbucks. The charts are bullish and traders could go long on any dip towards $100 risking a close below $95."

In the daily bar chart of SBUX, below, we can see that the shares have moved higher from our Dec. 10 review. Unfortunately, there was a late January shakeout that would have stopped out our recommendation. Prices rallied back and made new highs in March. SBUX entered April trading above the 50-day moving average line. The slope of the 200-day average is positive.

The On-Balance-Volume (OBV) line has moved lower the months of February and March and that is a bearish divergence when compared to prices moving higher. The OBV line did not confirm the price gains. The 12-day price momentum study shows lower highs from February into March which tells us that the pace of the price advance is slowing and this too is a bearish divergence.

In the weekly Japanese candlestick chart of SBUX, below, we can see some weakness. The chart shows some upper shadows around $110 telling us that traders are rejecting some of the recent gains. The slope of the 40-week moving average line is bullish.
The weekly OBV line has been pointing lower the past four months. The 12-week price momentum study in the lower panel shows that the pace of the advance has been slowing for several weeks.

In this daily Point and Figure chart of SBUX, below, we can see a potential upside price target in the $126 area but we also see that a decline to $103.41 could weaken the picture. 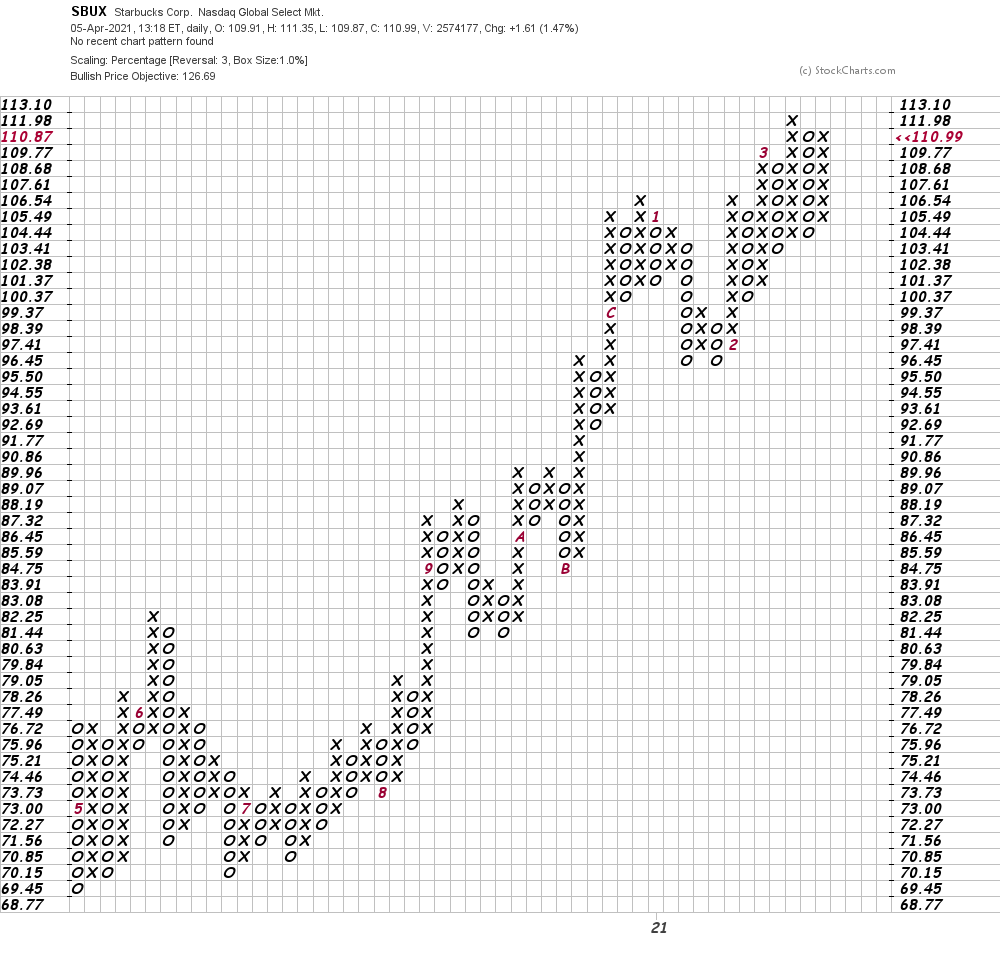 Bottom-line strategy: We have pointed out some bearish divergences on the charts of SBUX. A decline to $103.41 could weaken the Point and Figure chart. It looks like a good idea to nail down some profits on SBUX.
(Starbucks is a holding in Jim Cramer's Action Alerts PLUS member club. Want to be alerted before Jim Cramer buys or sells SBUX? Learn more now.)
Get an email alert each time I write an article for Real Money. Click the "+Follow" next to my byline to this article.
TAGS: Investing | Stocks | Technical Analysis | Beverages | Food & Drink | Action Alerts PLUS