In our Dec. 8 review of Starbucks (SBUX)  we wrote that, "SBUX probably has bigger problems than the unionization of some of their employees. Cost pressures from higher prices for coffee beans, milk, sugar, etc., and pressure to have new locations with drive up windows, and more. The charts and possible price targets are "just okay", so I am in no particular rush to recommend purchase." Hopefully traders did not buy shares of SBUX.

In the updated daily bar chart of SBUX, below, we can see that the charts went from just okay to bearish. SBUX has broken below the 50-day 200-day averages and the slopes of both are negative (bearish).
The On-Balance-Volume (OBV) line has been weak since early December and tells me that sellers of SBUX are more aggressive. The Moving Average Convergence Divergence (MACD) oscillator went to a sell signal earlier this month.

In the weekly Japanese candlestick chart of SBUX, below, we see a bearish picture. Prices are below the now declining 40-week average line.
The weekly OBV line shows weakness from 2019 and it is close to making a new low for the move down. The MACD oscillator has crossed below the zero line for a sell signal.

In this daily Point and Figure chart of SBUX, below, we can see a potential downside price target in the $87 area. 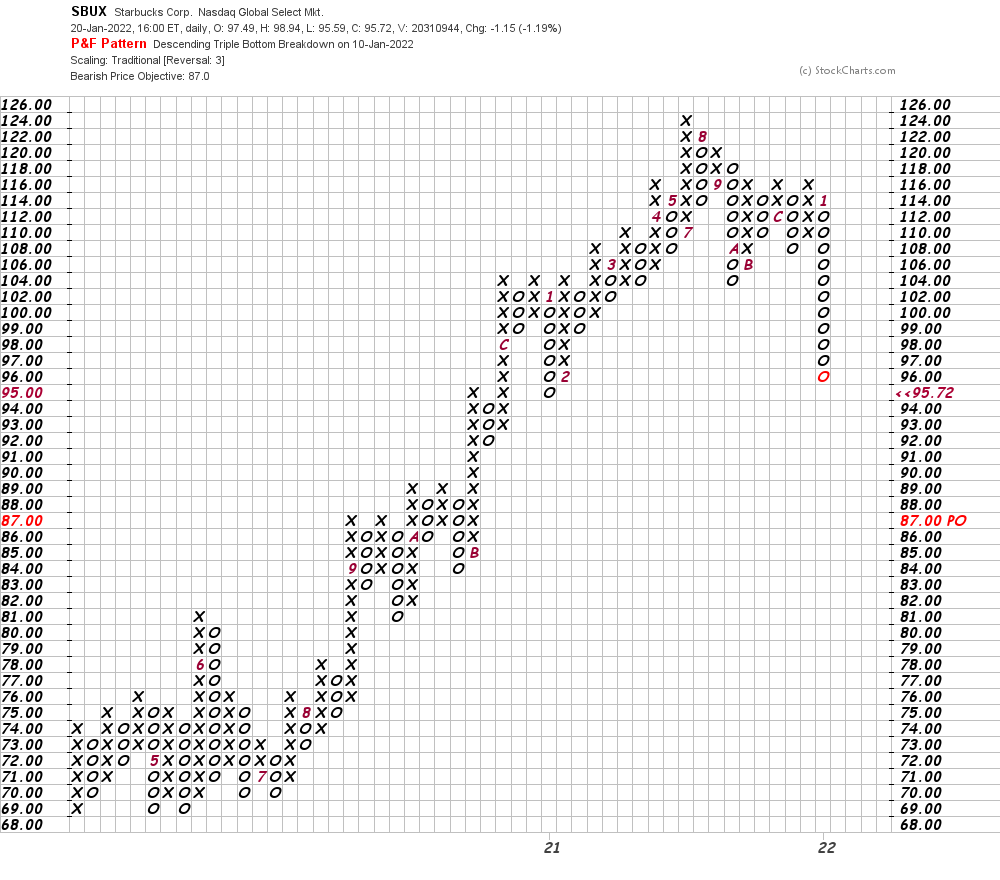 In this weekly Point and Figure chart of SBUX, below, we used a five-box reversal filter. Here, the chart suggests the $48 area as a potential objective.

Bottom-line strategy: Normally bears hibernate at this time of year but now they are wide awake despite having decaf. Avoid the long side of SBUX.

(Starbucks is a holding in the Action Alerts PLUS member club. Want to be alerted before AAP buys or sells SBUX? Learn more now.)

Get an email alert each time I write an article for Real Money. Click the "+Follow" next to my byline to this article.
TAGS: Investing | Stocks | Technical Analysis | Food & Drink | Restaurants