For his Executive Decision segment of "Mad Money" Monday, Jim Cramer spoke with Kevin Johnson, president and CEO of Starbucks Corp. (SBUX) , the global coffee chain with 6% same-store sales growth last quarter. I never interviewed Kevin Johnson as he joined the company in 2009 but I interviewed Howard Schultz a number of times when I covered the coffee and cocoa markets at Reuters in the early 2000s. (I found most of the people in the coffee industry delightful as they were multilingual, well-traveled, passionate about coffee, and they loved food and wine.)

Johnson said Starbucks continues to focus on improving its customers' experience, whether that's innovating with new beverages, making its stores better or improving its digital offerings. The company's partnership with Nestlé  (NSRGY) also is accelerating, making a meaningful contribution to their bottom line.

Johnson was bullish on Starbucks' cold brew and nitro products, which are driving customers into stores during off-peak times. Its digital strategy is also increasing customer loyalty. Nearly 42% of all payments are now made via the Starbucks mobile app, he said.

When asked about China, Johnson said Starbucks' China business was built in China, for China, and is not suffering from tariffs or trade issues. Starbucks also continues to have a terrific partnership with Alibaba Group Holding Ltd. (BABA) inside China, he said.

Finally, Johnson reiterated that Starbucks is about more than just shareholders. It focuses on all stakeholders and is making strides to advance projects such as hiring more veterans and providing more service to the communities it serves.

Let's brew a pot of coffee, forget about the fundamentals for a minute and focus on the charts.

In this daily bar chart of SBUX, below, we can see the share price of SBUX has nearly doubled since last summer. You might think it was a tech company or involved with the cloud. Prices are above the rising 50-day moving average line but perhaps extended when compared to the rising 200-day line. The daily On-Balance-Volume (OBV) line has been positive and rising the past 12 months. The Moving Average Convergence Divergence (MACD) oscillator is in a take profits sell mode.

In this weekly bar chart of SBUX, below, we can see that prices have been in a rally phase the past 12 months, which followed a two-year consolidation pattern. Prices are above the rising 40-week moving average line -- maybe too far above the indicator. The weekly OBV line has been very strong this year and tells us that buyers of SBUX have been more aggressive. The MACD oscillator is well above the zero line but it has begun to narrow.

In this Point and Figure chart of SBUX, below, we can see modest downside price target of around $89 projected. 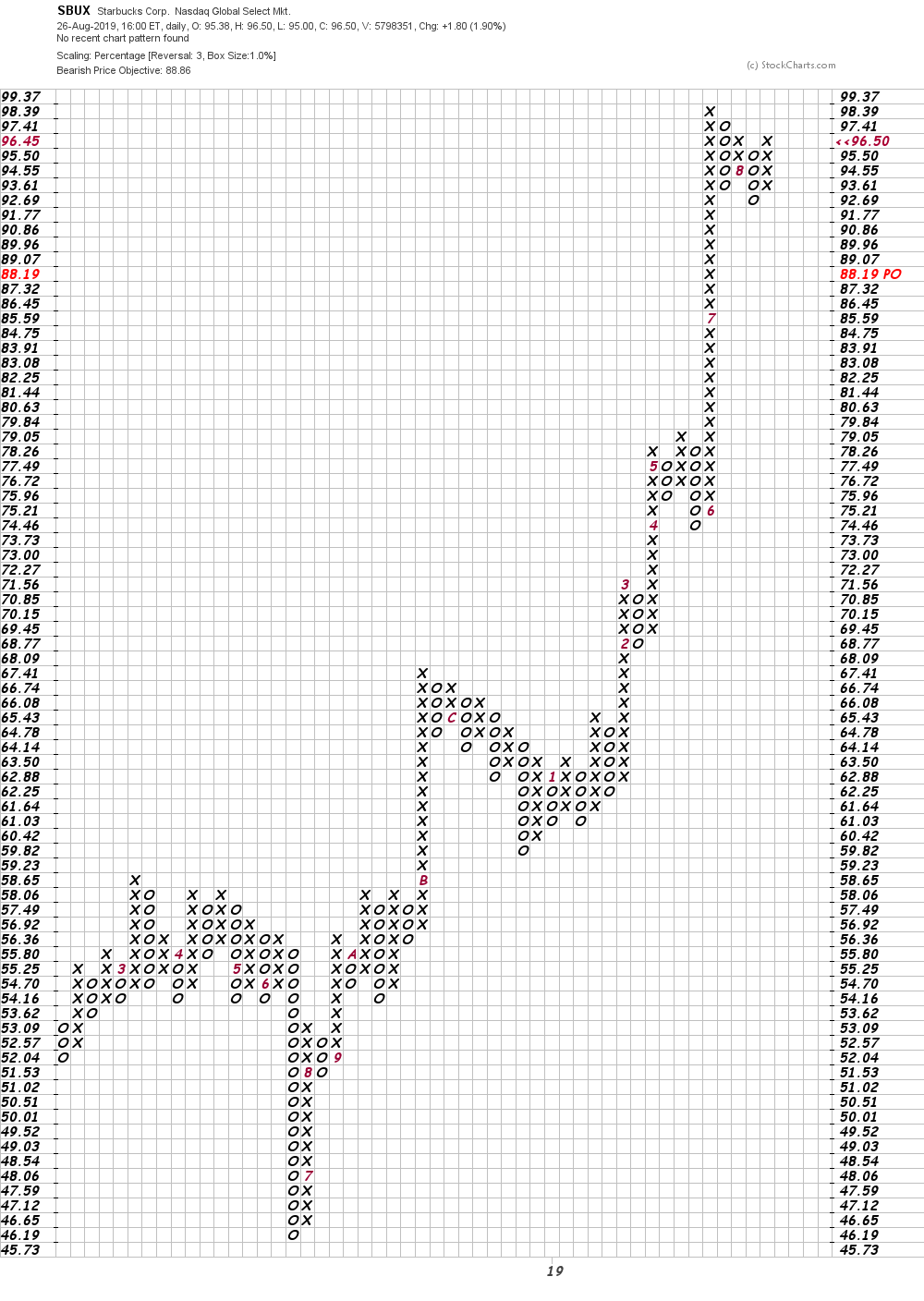 Bottom line strategy: The price of SBUX looks extended (overbought) and there is a gap below the market. This might be enough to generate a pullback to the $89 area in near term.

Let's Reconnect With This 5G Name

Here's how a trade Viavi Solutions at it continues to fly under the radar, but now looks poised to pick up.