For his Executive Decision segment of "Mad Money" last Friday, Jim Cramer sat down with Kevin Johnson, CEO of Starbucks Corp. (SBUX) , a company that pledged to hire 25,000 veterans by 2025 but reached its goal years ahead of schedule.

Johnson said veterans simply make Starbucks a better company and even now it is still committed to hiring more than 5,000 veterans a year. In addition, Starbucks has opened 62 special locations near military bases where military families can come together and create new communities. Johnson said he plans to have more than 130 of these locations over the next two to three years.

Starbucks is also a big proponent of mental health, Johnson said, as nearly one in five Americans suffer from mental health issues at some point in their lives. Starbucks wants their employees to be healthy, and providing mental health care is a big part of that goal.

Turning to the company's business and strong quarterly results, Johnson said Starbucks still has $4 billion in cash to return to shareholders in the form of dividends and stock buybacks and he's ready to "back up the truck" and start buying shares on any market weakness.

Let's check out the charts and indicators of this iconic brand.

In this daily bar chart of SBUX, below, we can see that prices have been testing the rising 200-day moving average line this month. So far the line has held as buyers seem to be defending it. SBUX is below the declining 50-day line. The On-Balance-Volume (OBV) line has basically moved sideways from late July, which suggests to me that longs have continued to hold their positions as prices have declined.

The 12-day price momentum study in the lower panel continues to show a bullish divergence, with the pace of the decline slowing from September to October to November even as prices have worked lower. A slowing pace typically happens because someone is a scale-down buyer of the stock. This could be the company itself or institutional accounts or retail customers. A bullish divergence can foreshadow a trend change for the security.

In this weekly bar chart of SBUX, below, we can see that prices closed on Friday below the rising 40-week moving average line. The weekly trading volume has declined all year, suggesting that sellers are not leaning on the stock. The weekly OBV line shows some softness from late August, which does suggest more aggressive selling. The slow stochastic indicator -- an overbought/oversold indicator -- shows that prices are very oversold, which could make them prone to a bounce or rally.

In this Point and Figure chart of SBUX, we can see that prices have met a downside price target. Meeting a target is not necessarily a reason to buy. A trade at $87.32 is needed to really improve this chart. 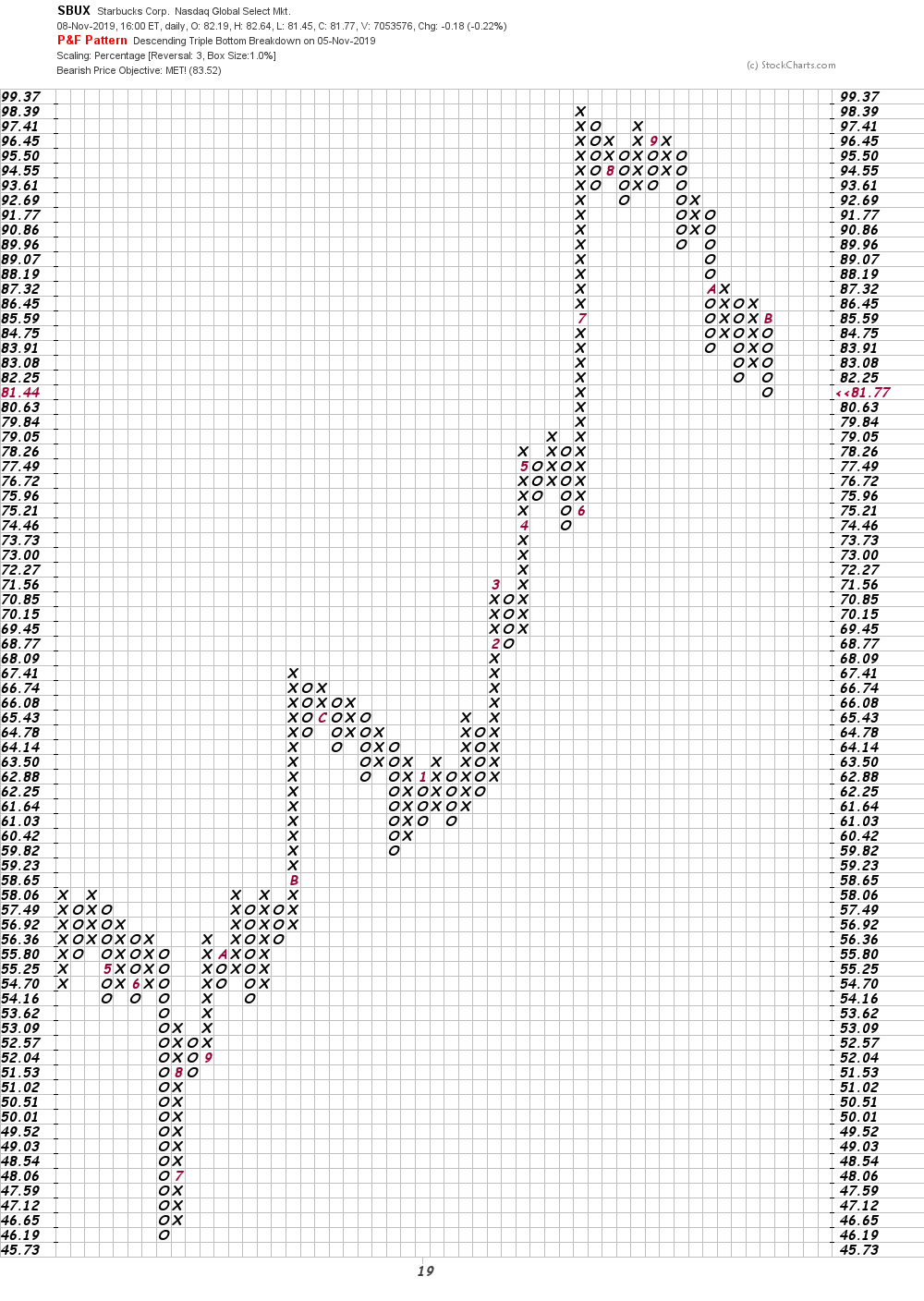 Bottom line strategy: Maintain any longs and continue to keep stop protection. Only add to longs on strength. If stopped out we will reappraise.

Get an email alert each time I write an article for Real Money. Click the "+Follow" next to my byline to this article.
TAGS: Investing | Stocks | Technical Analysis | Consumer | Food & Drink | Restaurants | Mad Money | Executive Interview

Bad News Is Better for Market Than Uncertainty

This market is all about the news flow and it is not going to provide much upside opportunity until there is more clarity, even if the headlines are bad.

Jim Cramer: Here Are 10 Stocks for a Stay-at-Home Pandemic

These companies should continue to work, while we wait for a cure or a vaccine or the darned virus to run its course.

This market is wreaking havoc with current pricing versus historical moves.

The Chinese people are about to learn the extent of economic distress.