Lawmakers have been busy in our nation's capital. Very busy.

The impeachment inquiry? Sure, that issue might be making the headlines, but there are other moving parts just beneath the surface. Moving parts that might be (they are) moving markets.

The House of Representatives passed a short-term continuing resolution that in effect will keep the federal government in business until Dec. 20, if enacted into law. If the bill should not become law, the feds will run out of dough sometime around Thursday evening / Friday morning (real soon). Remember that Congress just passed a short-term extension back in September ahead of the government's new fiscal year.

This bill largely passed in the House along partisan lines, with Democrats in support and Republicans for the most part against, though there were crossovers in both directions. The border wall is really the underlying reason behind the inability of Congress to pass anything resembling a full-year budget. Basically, Democrats would like to limit the administration's ability to purpose funding according to perceived needs, while Republicans hold the opposite view. I'm sure the two sides will be able to clear up this disagreement within a month. Right?

Of course, the House breaks for the holidays at the close of business on Thursday, Dec.12, while the Senate hangs in there until the next day. No worries. They all seem like reasonable people with a tireless work ethic who understand deadlines.

While the House was rushing through a short-term funding bill, the Senate was unanimously passing the "Hong Kong Human Rights and Democracy Act." The House had already passed a similar bill back in October. Once the differences are ironed out between the two, the merged bill will head to President Trump for his signature. The aim of the bill would be to protect human rights within the semi-autonomous region of Hong Kong as pro-democracy protests have carried on for months and as the Chinese government tries to regain control.

Of course the U.S. has no jurisdiction in Hong Kong, but there are steps the U.S. can take. Under the House bill, the U.S. Secretary of State would need to certify annually that Hong Kong operates with enough autonomy to qualify for the special U.S. trading status that the region has enjoyed in the past. The Senate bill would ban the export of munitions closely associated with use in crowd-control situations, such tear gas, rubber bullets and stun guns. By the way, there are many levels of tear gas. The term covers a broad variety of gases that make it impossible to see or breathe, and they freakin' hurt.

As one might expect, the Chinese foreign ministry was critical of the stand taken by U.S. lawmakers, seeing this as an intrusion into Chinese domestic affairs. The overhanging question would be whether this harms relations between Beijing and Washington as the two sides work toward a limited preliminary trade deal. The answer requires two words. Of course. That does not make it wrong.

Investors have been witness to so many mood shifts when it comes to the U.S./China trade war that they have seemed in recent weeks to have become immune. A "Phase One" deal, even if quite limited, had been priced into equities as well as the long end of the U.S. Treasury yield curve. It appears the possibility of failure to agree between the two nations is starting to be priced back out, at least to some degree.

Know what? The two sides have never really agreed on what we see as the core issues. At least that's my view. China talks the good game, but it still appears the Chinese government remains unwilling to put into writing a defined minimum in agricultural purchases or an enforceable mechanism protecting U.S./ foreign interests from such key items as intellectual property theft or forced, unwelcome partnerships requiring the transfer of high-end technology as the price of market entry..

At issue, supposedly, would be the Chinese demand for the removal of U.S. tariffs as the price of such a trade deal. Obviously, the U.S., as would any sentient being, might be inclined to keep some (or most) tariffs in place for at least a while as leverage going forward. President Trump was clear on Tuesday, when he said, "If we do not make a deal with China, I'll just raise the tariffs even higher."

My thoughts on this? The U.S. is still in a better position than is China should these negotiations truly break down. Does the world then divide into not just economic but also strategic spheres of influence? It could. Welcome a trade deal; if there is none, then we identify, we adapt, we overcome. As a nation. No fear. Not ever. Cold war? Been there. Done that. Won that. Say again? I said, "Won that."

Ladies and gentlemen, now appearing in the center ring ... New York Fed President John Williams, who is also vice chairman of the Federal Open Market Committee (FOMC) and has tried to give the impression that the central bank is not leaning one way or the other on the implementation of further policy changes. That's fine, as the Treasury yield curve (the three-month /10-year, the spread that matters) has remained un-inverted since early October.

However, as any growth-based optimism over a trade deal between the U.S. and China becomes wobbly, the long end of the curve is seeing some significant support, rapidly collapsing that spread. Take a look.

Here on Wednesday morning, that positive 22 basis points (as of Tuesday's close) is down to about 18 basis points. While I agree with the Fed's stance at this point, should yields at the long end of the curve once again threaten to invert the FOMC will need to remain ever vigilant to act. Nothing cute about it.

"The economy is in a very good place," Williams said on Tuesday. The Atlanta Fed's GDPNow model for fourth-quarter GDP is "running hot" at 0.4%. If that constitutes a "very good place," I wonder what Williams sees as "just OK" or outright lousy. Williams did say later in his appearance, "I'm definitely watching more for some kind of the downside kind of risks in the outlook now." That sounds a little more realistic.

Incredibly, Williams also mentioned, as quoted in The Wall Street Journal, that "We've proved this year that when the economic facts changed, we change our views on the economy and" policy." Williams seems to completely miss the fact that the Fed had forced the change in those economic facts and merely acted in 2019 to correct their own policy error. By the way, the Fed had to add more than $102 billion in overnight and 14-day repurchase agreements just 24 hours ago. Yes, that keeps happening, but by all means keep bragging about the sloppy evolution of how you implement policy.

Oh, did I mention that Retail Sales away from autos and gasoline really are not so hot, and that the underpinnings of the monthly Consumer Price Index (CPI) are becoming quite inconsistent?

Talk about the company that just cannot get out of its own way. I mean, at what point does someone else take a stab at manufacturing commercial jetliners? Incredibly, on Tuesday, the National Transportation Safety Board recommended that Boeing (BA) redesign engine covers on 737 Next Generation jets. For those wondering, Next Generation is an older program that has nothing to do with the problems with Boeing's 737 Max program.

The National Transportation Safety Board (NTSB) has called upon the Federal Aviation Administration (FAA) to mandate that Boeing retrofit more than 7,000 aircraft already in service since as far back as 1997. This comes after a fan blade on one of these engines broke in April 2018 and killed a passenger. The fan blades themselves are manufactured by CFM International, which is a joint venture between General Electric (GE) and Safran Aircraft of France. Boeing believes the fan blade issue can be "completely mitigated" through proper inspection.

Some of you may have noticed the downgrade that impacted AT&T (T) on Tuesday. Craig Moffett of MoffettNathanson took AT&T down to a "sell" from "neutral." Moffett cites concern over whether the wireless business can offset the struggling entertainment group, which includes DirecTV, not to mention plans for the coming HBO Max streaming competitor that will go up against the likes of Netflix (NFLX) , Disney's (DIS) Disney+ and Apple's (AAPL) Apple TV+.

AT&T stock sold off more than 4% in response. That said, I think this is one reason why Elliott Management got involved in the first place. -- to refocus T strategically. Let's also not forget about that 5.4% dividend yield. Yes, I am long this one. 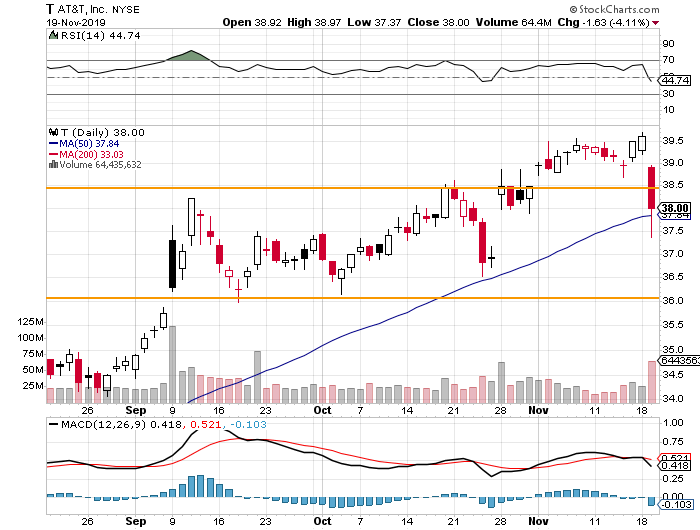 As an AT&T shareholder, I do find it troubling that these shares dropped not only below what had become a level of established resistance for the early September / mid-October period, but also that there was a failure to hold the 50-day simple moving average (SMA). That forces out the weaker hands, meaning risk managers pressure portfolio managers over these things.

If you've been in this one with me the entire time, we're still up more than 20%. I see no need to panic; indeed, my panic point for the name is currently $35. However, it is crucial right now that Moffett stands alone in his opinion. He gets some company and I may just change my view. In the meantime, there must be an attempt not just to retake the 50-day line, but the pivot point just above $38.50.

Get an email alert each time I write an article for Real Money. Click the "+Follow" next to my byline to this article.
TAGS: Federal Reserve | Interest Rates | Investing | Stocks | Treasury Bonds | Aerospace | Media | Telecommunications | Real Money