For an Executive Decision segment of "Mad Money" Wednesday, Jim Cramer spoke with Robert Mintak, CEO of Standard Lithium Ltd. (SLI) , a speculative stock that's risen 430% over the past year.

As electric vehicles gain in popularity, the demand for lithium has never been greater. Yet in the U.S., there has been no new lithium production added in over six decades, Mintak said. The production that does exist is merely a rounding error on the global stage.

That's about to change, Mintak said, as Standard Lithium is bringing a technological approach to the solution and placing it in the middle of Arkansas. He said Standard Lithium doesn't mine for lithium by crushing rocks, but rather extracts lithium from a saltwater brine solution using technology in an environmentally friendly way.

The company's tech is currently in operation at a test facility. The plant is producing battery-grade lithium that could supply the U.S. battery EV market when scaled up to full size, Mintak said.

Let's check out the charts of SLI.

In this daily bar chart of SLI, below, we can see that prices made a base pattern or consolidation pattern (either description works) around $4. Prices started a strong rally in June and nearly tripled in price before a profit-taking reaction set in. SLI pulled back to test the rising 50-day moving average line and successfully made a turn to the upside again. The slope of the 200-day average is bullish.

Trading volume has been increasing since June as the SLI story gets greater play. The On-Balance-Volume (OBV) line shows a rise for the past 12 months and not much of a decline in August, when prices corrected. This tells me that buyers are more aggressive and traders largely held their positions when prices retreated. The Moving Average Convergence Divergence (MACD) oscillator turned up again in September.

In this weekly Japanese candlestick chart of SLI, below, we can see almost a two-year base pattern around $1. Prices are trading above the rising 40-week moving average line. The weekly OBV line is bullish and so is the MACD oscillator.

In this daily Point and Figure chart of SLI, below, we used closed-only price data. Here the software projects the $9 area as a potential price target. Not much of a target, really. 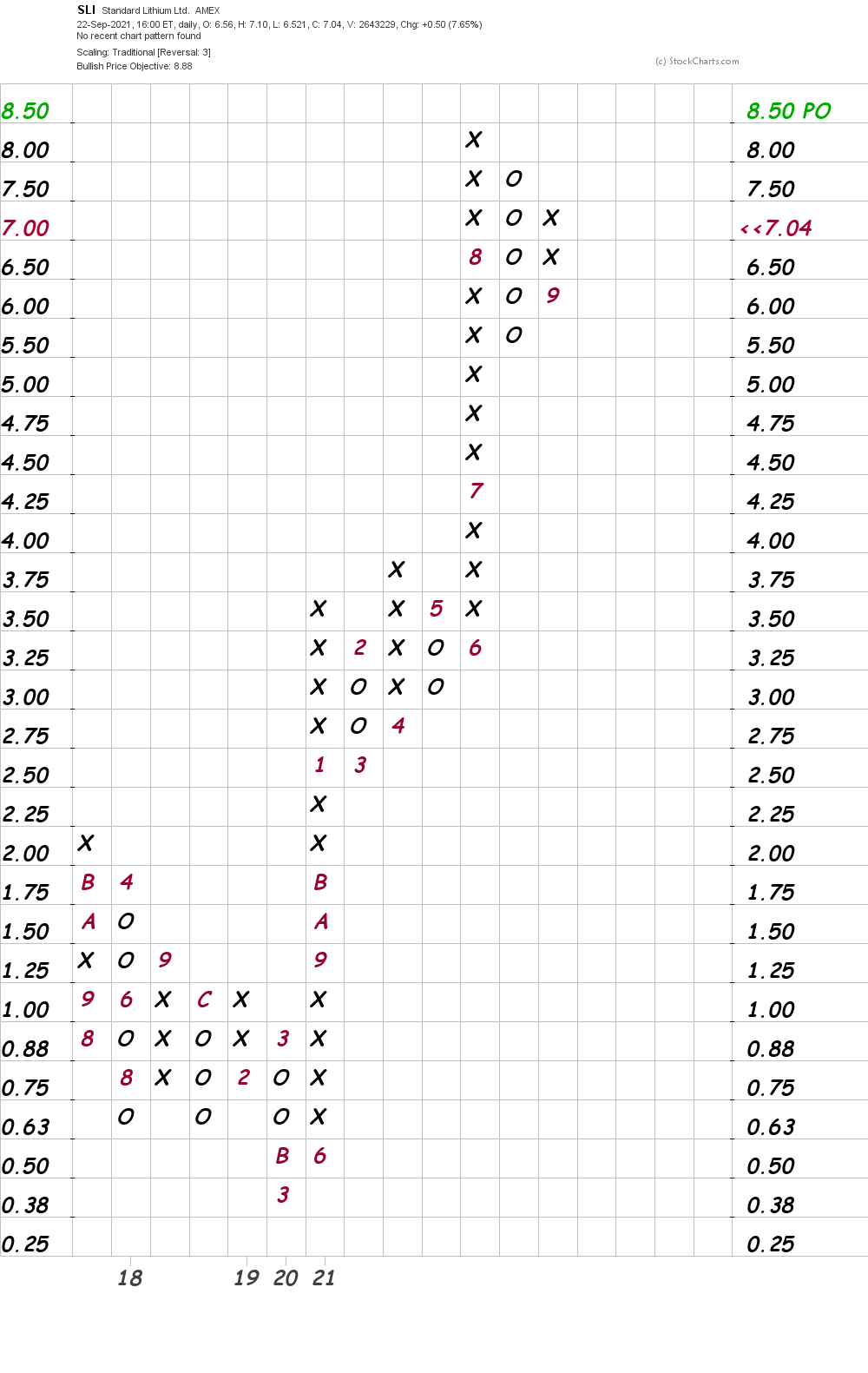 In this weekly close-only Point and Figure chart of SLI, below, we found a $21 price objective.

Bottom line strategy: With commercial production of lithium by Standard Lithium still not here, a long position in SLI is speculative. Traders who understand this risk could go long SLI closer to $8 if available while risking to $6. On the upside we have targets of $9 and then $21.

Get an email alert each time I write an article for Real Money. Click the "+Follow" next to my byline to this article.
TAGS: Commodities | Investing | Stocks | Technical Analysis | Automotive | Metals & Mining | Mad Money | Executive Interview | Real Money | Electric Vehicles