In Thursday's missive I alluded to the anecdotal change in tone and sentiment that we've seen this week. Today I would like to discuss that change in sentiment using some charts and indicators. Let me preface this discussion by noting none of these readings are extreme, but it's the swiftness with which they have moved in the last week that has caught my eye.

Let's start with the day traders at the American Association of Individual Investors. They finally turned a little bit bullish this week, with the bulls moving up 6 points, while the bears lost 6 points, so they essentially jumped the fence. It is more typical for bulls to sit on the fence before jumping into the bear camp and vice versa, so that they jumped is of note. Again, there is nothing extreme about 30% bulls, but it's the swift shift. 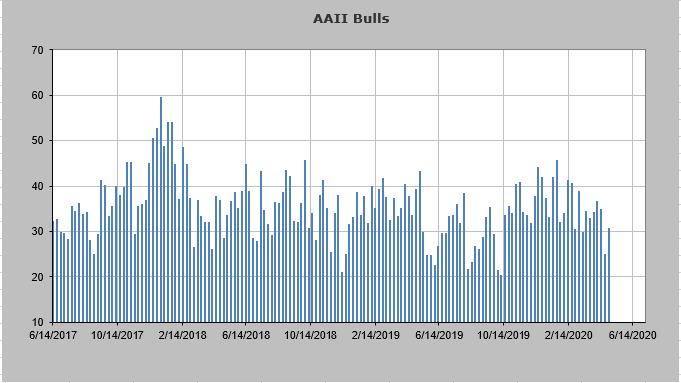 Then there is the National Association of Active Investment Managers (NAAIM), which does a check on their members for their exposure to equities on a weekly basis. At 78%, you can see there is nothing extreme about it. But the move this week was up a bit more than 30 points. That's quite a jump in exposure isn't it? We didn't even see a shift like that coming off the December 2018 low. 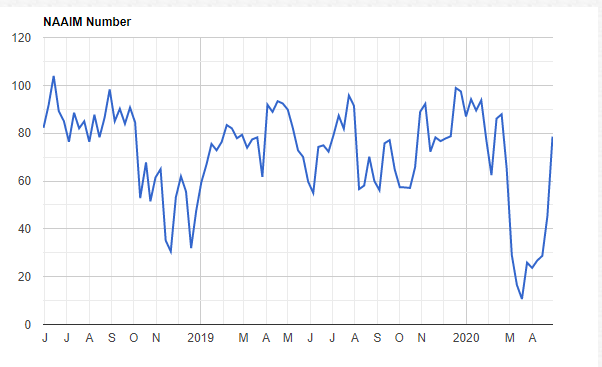 Then there is the equity put/call ratio, which was 53% on Wednesday. That was the lowest reading since Feb. 20, just before the downturn, when it was 51%. None of that is extreme, but just over a week ago when the 10-day moving average was higher I explained how if we saw another week or so of readings that hovered around 60%, we were likely to see the 10-day moving average get down to 60%. Now, you can see it has dipped a smidgen below it. There is nothing magical about 60%, except that once it dips down there we can no longer say people are bearish. I would say they have now accepted the rally.

We don't look at the ISE Call/Put Ratio very often, but notice that the 10-day moving average did not get nearly as extreme as the CBOE's put/call ratio did in the plunge in March. But also notice that it spent a great deal of time in the last five-to-six weeks milling around at the lows. (Remember, this is a call/put ratio, so low readings are bullish, whereas high readings are bullish for the CBOE's put/call ratio).

But now look at the 10-day moving average and what it's done this week: spiked higher. So here, too, we have started to finally see acceptance of the rally.

Finally there is the Volatility Index. We looked at this earlier in the week with an eye toward a pop as we get further into May. It popped on Thursday. I don't have a strong sense of whether it keeps on going or dips back toward 30 one more time, but I can tell you I do not think we're looking at a one-day pop in this; I think there will be more as we head into May and the market gets intermediate and short-term overbought.