Merritt explained that as Splunk transitions from an on-premises to subscription-based cloud software, they really are a tale of two companies. On the cloud side, revenue grew by 83% in the quarter and sees no signs of slowing down.

On the on-premises side, however, they did see some delayed purchases as companies contemplated whether now was the right time to move to the cloud. Splunk has taken steps to assist customers who find themselves in these situations.

Merritt added that for customers like Shopify (SHOP) , Splunk is proving to be an invaluable tool.

Cramer said Splunk is the perfect stock to put on your shopping list for when the market selloff is complete.

In our last review of SPLK back on Sept. 21 we wrote that, "Traders should have been stopped out with the close below $180 unless they managed to take profits on strength in early September. The charts and indicators are weak now and SPLK could decline to the $143 area or even lower in the weeks ahead."

Now that SPLK has passed our $143 price target let's check out the charts to see where prices may find buying interest.

In the daily bar chart of SPLK, below, we can see that the shares made an upside attempt in October but failed to make new highs. Prices declined into November and then gapped sharply lower at the beginning of December. SPLK gapped below the rising 200-day moving average line and a rally back to the underside of the line failed.

The On-Balance-Volume (OBV) line peaked in November and has declined to a new low for the move down, breaking even the December low. The Moving Average Convergence Divergence (MACD) oscillator turned bearish at the beginning of December and is still below the zero line.

In the weekly Japanese candlestick chart of SPLK, below, we see a bearish picture. Prices bounced in late December but failed around the middle of the large red candle of late November -- typically the middle of large red candles act as resistance. The slope of the 40-week moving average line has turned negative/bearish so I would expect math-driven technical analysts to be bearish now.

The OBV line has weakened significantly since November and the MACD oscillator has been bearish since December.

In this daily Point and Figure chart of SPLK, below, we can see that prices reached and exceeded the downside price target in the $156 area. 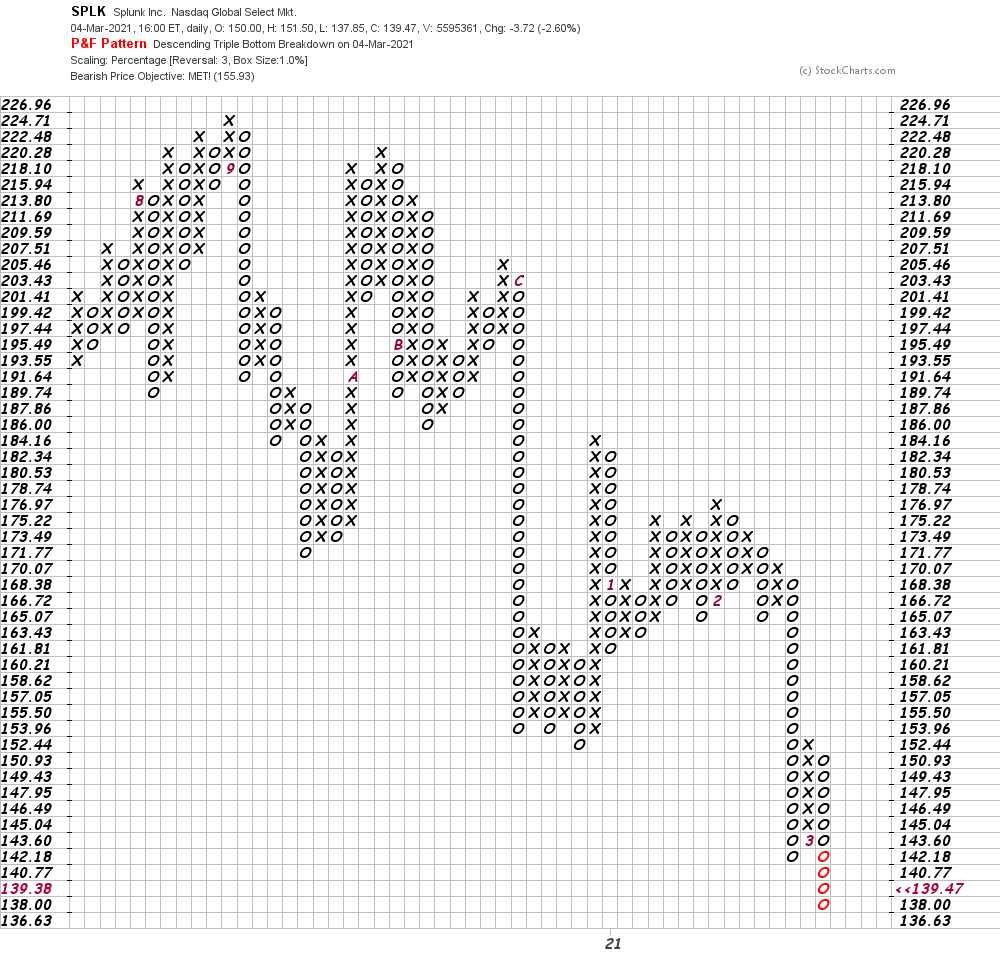 This weekly Point and Figure chart of SPLK, below, is projecting a tentative price target of $98.

Bottom-line strategy: Continue to avoid the long side of SPLK. A retest of the March low is possible, according to the weekly Point and Figure chart (above). We will have to look at SPLK again around $100 to see if buyers become more aggressive in that area.