One week ago today I wrote right here in these pages about how we had pretty much wrung most of the speculation out of the market. I considered it a positive.

It wasn't only the speculation, it was also that so many had seemingly turned so negative on growth and tech stocks. Folks seemed to have a laundry list of why they didn't like those stocks anymore. Well, in that week the Invesco (QQQ) have rallied about 6% and the SOX has rallied about 9%.

All those beaten down tech stocks have started to come to life this week. Then, on Wednesday the speculative meme stocks decided to emerge from hibernation. No sooner did the speculation leave than it has returned, albeit not (yet) to the extent we saw it in January.

The move in those speculative names has skewed the statistics, as they did last June and as they did in January and February. When all the volume goes into those stocks the volume statistics get skewed. For example AMC (AMC) was 8% of the total volume traded on the New York Stock Exchange Wednesday and 11% of the upside volume. Upside volume was 78% of total volume on the NYSE, so you can see how a stock like AMC can skew that.

However, as one who prefers not to rationalize an indicator, it is what it is.

One indicator that can't be rationalized and shouldn't be is the Investors Intelligence bulls. This week's reading is back down to 51.5%, which is the lowest reading since March 10. You might recall March 10 was the last time folks were hysterical over tech stocks (arrow on the chart) and it turned out to be the low in the QQQs.

The Investor Intelligence survey is tallied through last week, so it is possible that by the time we see it next week, it will have shifted upward once again -- or likely it will have -- but as of now with the exception of that mid-March reading, this is the lowest reading for bulls since last year coming out of the March lows. It confirms that reading we had last week from the National Association of Active Investment Managers (NAAIM) when their exposure had dipped to 44. That report will be out Thursday and I expect to see those numbers higher. 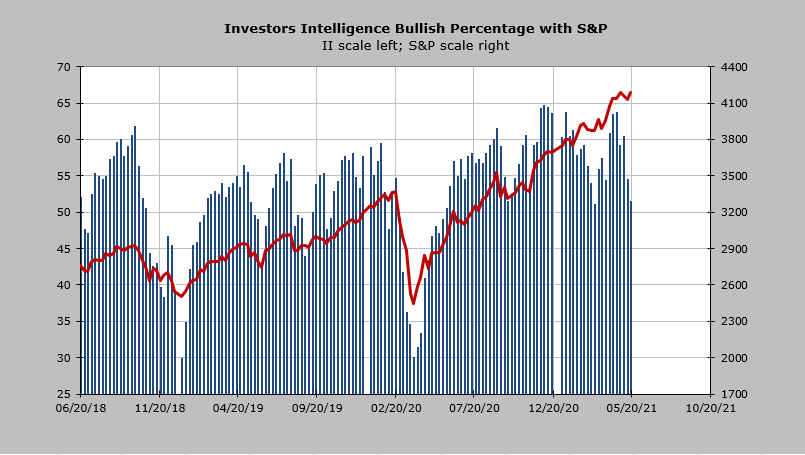 And, yes, we are seeing folks slowly creep back into the market. The put/call ratio has now been under .80 twice this week; we had not seen readings under .80 since early May. The 10 day moving average of the put/call ratio has finally turned down, but we'll need several more low readings to get it back to the bottom of the page.

Finally you can see that the Overbought/Oversold Oscillators are now pushing back into overbought territory. I suspect we see some sloppy or backing off and then another try upward since sentiment is not fully on board yet.