Special Purpose Acquisition Companies, or SPACs, continue to provide fantastic trading opportunities. And I believe there are some buy and hold opportunities in this space as well.

I've already professed my admiration for Forum Merger II (FMCI) , which will soon be known as Tattooed Chef. However, the stock has bounced almost 50% since my writeup last Friday, so an investor is now paying closer to the lower end of the trading range I see over the next 12 months.

The two buy-and-hold names I would consider here offer both sides of the coin. One with no deal in place nor any letter of intent signed. The other will have its merger vote a week from Monday.

First up is recent creation Jaws Acquisition Corp. (JWS.U). This is a unit rather than a stock or a warrant. A unit is a combination of stock and warrant until the two begin trading separately, so this is very early in its life. In this case, each unit consists of one Class A share and one-third of one redeemable warrant which can be used to buy shares at $11.50. Initially, the company intended to raise $460 million, but demand drove that to $600 million with another $90 million for over-allotment.

The big draw for Jaws is the chairman: Barry Sternlicht. Despite Sternlicht's involvement the company does not intend to pursue real estate, lodging, or energy infrastructure. Given the current economy, I find that a good move.

Sternlicht is also the chairman of Starwood Property Trust (STWD) as well as the chairman and CEO of Starwood Capital. With degrees from Brown and Harvard in addition to his work on Wall Street, this is the type of person you want in charge.

I wouldn't expect any immediate pops to the $15 or $20 level on this one. It may actually require some patience, but the downside should be limited.

On the flipside is Arya Sciences Acquisition Corp. (ARYA) , which is set to vote on its proposed acquisition of Immatics on June 29. Immatics has a strong T cell receptor-based pipeline in the immunotherapy approach to cancer treatment. 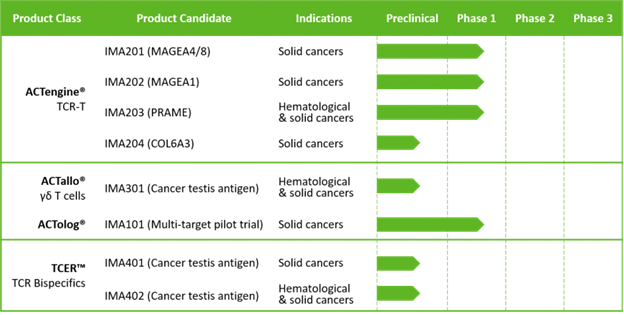 It's a Friday, so I doubt most folks want to get into the impressive science Immatics already showcases, but what should catch your eye, if nothing else, is the strategic partners Immatics has already.

Not mentioned on the chart above is the fact that Genmab entered into a collaboration with AbbVie (ABBV) to joint develop and commercialize three of Genmab's bispecific antibody products. If we dig into Immatics a bit, we'll find they entered the partnership with Genmab in 2018 (and received $54 million upfront) to create bispecific therapies.

The deal with Glaxo announced earlier this year included a $50 million upfront payment for the develop of Adoptive Cell Therapies to treat cancer.

Immatics offers the potential best of both worlds -- a partnership platform plus developing clinical-stage products. The company has four trials under way with MD Anderson Cancer Center with the potential for several more treatments to move into clinic soon. And the CEO has already said Immatics is considering entering another strategic alliance with a large player in the field of cell therapy.

Lastly, this SPAC is sponsored by Perceptive Advisors and Joe Edelman. In terms of biotech, Edelman is a rock star. If there's a huge mover, he has his hand in it somewhere.

Perceptive's returns over the past two decades are matched by few. Similar to the idea above with Sternlicht, I like putting some of my money with incredibly successful folks that are well-connected and have a history of success.

With all the speculative SPACs flying around traders' screens right now these are two I believe have value and significant upside potential, before those speculative names. In two years, I expect both of these names to be trading at two to three times their current prices.

(Bristol-Myers Squibb and ABBV are holdings in Jim Cramer's Action Alerts PLUS member club. Want to be alerted before Jim Cramer buys or sells these stocks? Learn more now.)

Get an email alert each time I write an article for Real Money. Click the "+Follow" next to my byline to this article.
TAGS: Mergers and Acquisitions | Takeover Possibility | Investing | Markets | Small Cap | Stocks | Trading

The Top 3 BDCs for Income Now